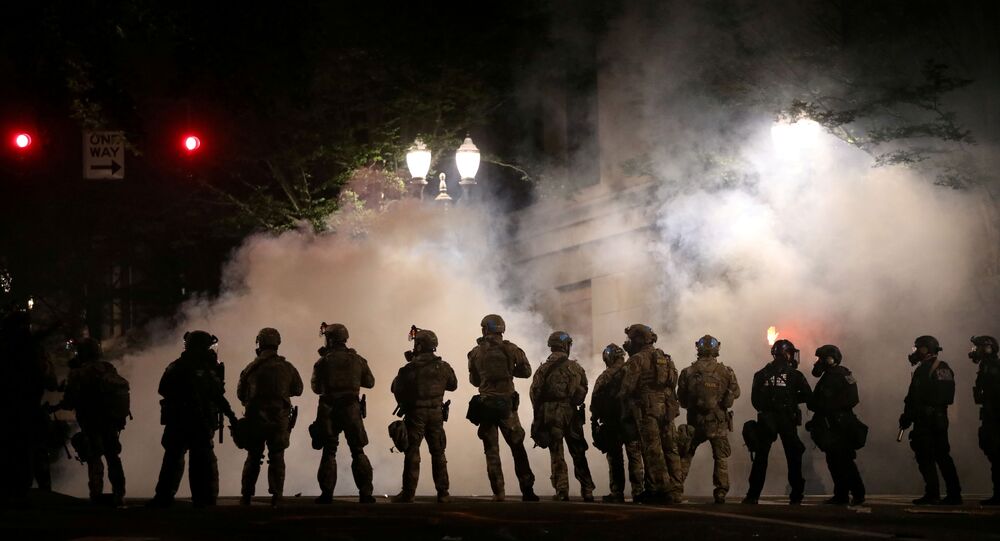 ‘War Come Home’: Americans ‘Should Be Absolutely Appalled’ by Trump Sending Feds to US Cities

Federal agents spotted in Portland, Oregon, recently are part of a mission called “Operation Diligent Valor” and have been seen wearing military fatigues that say “police” but bear no other insignia. The police have been driving around Portland in unmarked vans and arresting protesters without explanation.

On Wednesday, US President Donald Trump announced he would also be sending federal police to Chicago, Illinois, claiming Chicago Mayor Lori Lightfoot had “refuse[d] to do what is necessary to secure their neighborhood and to secure their city.” He has previously asserted that other cities, including Detroit, Philadelphia and Baltimore, could also see similar deployments of federal police.

“Who would think that we would see federal police on the streets of our city beating these people with batons, firing rubber bullets, pepper spray, tear gas? This is definitely the war come home,” Benjamin told Loud & Clear host Brian Becker.

“It’s bad enough that we have to face the racist local police in cities all over this country, but now to have to deal with federal police is something the American people should be absolutely appalled by and demanding this end immediately,” Benjamin said.

Trump has insisted that the federal agents in Portland are necessary to protect government assets. However, the city’s mayor, Ted Wheeler, has urged Trump to remove the agents.

“Keep your troops in your own buildings, or have them leave our city,” Wheeler said Friday. “The words and actions from President Trump and the Department of Homeland Security have shown that this is an attack on our democracy.”

Other city mayors have also pushed back against Trump’s desire to deploy federal agents to their cities. On Tuesday, Lightfoot announced that federal agents would not be engaging with protesters in Chicago.

“Under no circumstances will I allow Donald Trump’s troops to come to Chicago and terrorize our residents,” Lightfoot tweeted on July 21.

In Michigan, Detroit’s Mayor Mike Duggan and Police Chief James Craig said that they haven’t had any communication with the federal government about Trump’s reported plans to send agents to the city.

"There could be no possible justification for such an action. The Detroit Police Department has had the support of the Detroit community in making sure our city did not have a single store looted or a single fire started during the protests," the pair’s joint statement read. "Unlike nearly every other major city in the country, the Detroit Police Department never requested assistance from the National Guard — we handled our issues as a community. We definitely have no need for any federal presence being sent in now."

Tom Ridge, a former governor of Pennsylvania and the first secretary of the US Department of Homeland Security, said on Tuesday that if he were governor of a state today, it would be a “cold day in hell” before he would allow the federal government to force agents into one of that state’s cities.

“Had I been governor even now, I would welcome the opportunity to work with any federal agency to reduce crime and lawlessness in any of the cities, but I would tell you Michael, it would be a cold day in hell before I would consent to an unilateral, uninvited intervention in one of my cities," Ridge told journalist Michael Smerconish on his SiriusXM radio program.

“I think there are going to be more and more Republicans speaking out … so Trump is setting himself up against anybody who believes in states’ rights - and of course the Democrats who are looking for any way to go against Trump, and certainly this is a great one to take on,” Benjamin noted.

Trump 'Comfortable’ With His Young Son, Grandchildren Returning to School