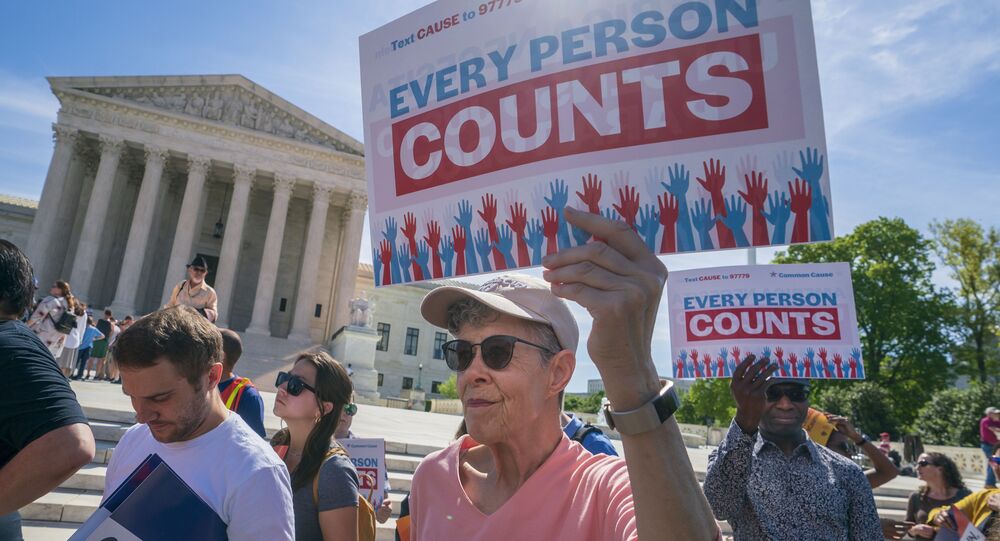 Earlier, US President Donald Trump has signed an executive order requiring census counts to be adjusted by subtracting undocumented immigrants, saying that his administration "will not support giving congressional representation to aliens who enter or remain in the country unlawfully".

The order cited as an example "one state", which is presumed to be California, where there are more than 2.2 million illegal immigrants, and including them in the apportionment would result in two or three more congressional seats for the state.

Political commentator and columnist Michael R. Shannon gave his take on the matter.

How would you assess the president’s decision?

Shannon: I was pleasantly surprised. You may recall months ago that the president wanted to answer a question regarding citizenship on the one hand, which is a perfectly legitimate thing to do. And the Supreme Court said he couldn't. And I was afraid he was going to let the issue drop. But he did not. And I think this is a very good idea. And I hope that he is reelected, because if Joe Biden is elected, they will ignore this executive order.

Census data is used to determine the size of electoral districts that supply lawmakers to Congress, as well as state legislatures. How does this current order influence the election process? Would this add more credibility to the vote count, bearing in mind the fact that the Supreme Court recently removed citizenship questions from the census?

Shannon: First of all, illegal aliens are and in fact, any alien, whether here legally or illegally, is not allowed to vote. Counting illegal aliens in the census rewards states that are part of a conspiracy to undermine the enforcement of US immigration law. It would be like United Airlines offering frequent flier miles to people who stow away on their airplanes in the cargo section. And these states have attracted new illegals and they weren't enforcing and cooperating with the enforcement of immigration laws because it does attract more population and that population is used in the census to increase their political power. I read an article this morning that said if you do not count the illegal aliens in California, they would lose five congressional seats. It does reduce California's power in the Congress. But it's also the right thing to do because illegal aliens are people who shouldn't be here in the first place. Their presence shouldn't be used to determine proportional representation in the Congress. Because what happens with states that enforce immigration law, say, like Oklahoma, Arkansas? Let's say they lose representation to states like California and New York and Virginia, which don't bother with immigration enforcement. So like I say, it rewards lawbreaking, which, as the president said in his announcement, creates perverse incentives.

The president added that the "radical left" has been trying to eliminate the concept of American citizenship and conceal the real number of illegal immigrants in the United States. How far will this "radical left" go against the White House?

Shannon: What I'm concerned about is this mail in balloting. I wrote a column a couple of weeks ago out about mass mailings. And we did say mailings slow down the count. The best way to remove trust in an election, in a presidential election, is to not have the result announced Tuesday night in New York. They were still counting mail in ballots in a primary, I think, three weeks after the election. That's just a recipe for fraud. And more important, it reduces the voters' trust in the system.