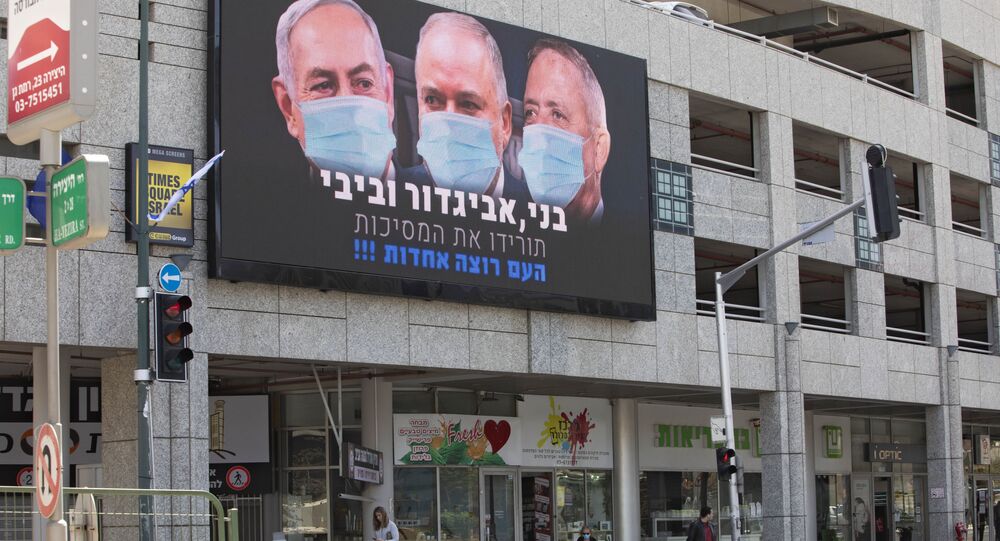 Israel Has No Alternative to Netanyahu, Masses Still Support Him Despite His Flaws

While mass protests against PM Benjamin Netanyahu's flailing economic policies continue, with crowds demanding he resign over the raging coronavirus pandemic, some say they prefer the prime minister to remain in office, primarily because of his experience in managing the country.

In April, when his approval ratings stood at 70 percent for his handling of the raging coronavirus, Prime Minister Benjamin Netanyahu could not imagine the situation would spiral out of control so quickly.

Thinking that the worst was behind him, he opened up the economy, lifted restrictions, and eased regulations, letting COVID-19 hit again, this time with a stronger force.

Since the outbreak of the pandemic over 50,000 people have been infected in Israel. As of Monday, more than 28,000 Israelis are being treated for the disease across the country and over 200 are in serious condition. Now many are blaming the PM for the health crisis which shows no signs of abating and the economic abyss that Israel is struggling to get itself out of.

In June, after most restrictions were lifted, the unemployment rate stood at 11 percent, a significant drop from the 21 percent registered during the first wave of the epidemic.

But for a country that rarely exceeded five percent unemployment that was still a significant number.

© REUTERS / Ammar Awad
Israelis block a main junction in the city as they protest against the government's response to the financial fallout of the coronavirus disease (COVID- 19) crisis in Tel Aviv, Israel July 11, 2020

It was for this reason that angry masses took to the streets across Israel demanding the government change its course or resign. The largest rallies took place in Tel Aviv and Jerusalem, in front of the PM's residence, where economic slogans quickly turned into political mantras, demanding Netanyahu's resignation.

But for Asaf Bereby, a Netanyahu supporter, who voted for him in the recent elections in March, the replacement of the PM is definitely not an option. The reason for this is the prime minister's vast experience in managing the country.

"He has been around for more than a decade and we have been through wars and operations under his leadership. So far he has proven to be a responsible leader".

Bereby is not alone. A recent poll suggested that if elections were held today, Netanyahu's Likud would still be Israel's biggest party with 34 seats in Israel's 120-seat parliament.

Yet the same poll also found that 40 percent of Likud voters were not happy with the way Netanyahu tackled the corona crisis and Bereby says he definitely understands the reasons for the public's dissatisfaction.

To start off with, Netanyahu didn't stick to his promise to extend Israel's sovereignty over parts of the West Bank, prompting disappointment within the country's conservative circles, while the raging pandemic and its economic repercussions have also taken a toll on his reputation.

"We lifted the lockdowns way too soon, before many other countries. At the same time, we haven't conducted the necessary check-ups and tests and we haven't prepared ourselves for the next wave. Now Israel and Netanyahu are paying the price".

However, despite the rage, Bereby says many will still vote for the PM if Israel ends up going to another round of parliamentary polls - a not so far-fetched scenario, especially given the fact that the coalition that was established to manage the coronavirus crisis is already showing signs of cracking.

"The truth of the matter is that Israel doesn't have an alternative to Netanyahu. The only person, who got stronger as a result of the current crisis was Naftali Bennett and his party Yamina but even he will not be able to challenge the prime minister if the time comes", says Bereby.

Already touted as a de-facto leader of the opposition, who has offered practical tools to tackle the coronavirus challenge and who has established a so-called COVID-19 cabinet comprised of medical and economic experts, Bennett's rating has gone up recently, pushing him from the previous seven seats to 14 in the event of elections.

But that's not enough to become Israel's PM, believes Bereby.

"Bennett doesn't go out of his way to slam Bibi. His criticism is always to the point but he too has a ceiling and I don't see him breaking it and surpassing the seats of Likud. When Bibi is gone, Israel will have a leadership vacuum and I highly doubt we will get to see a stable government that will serve the country for four consecutive years [as stipulated by the law]", he summed up.