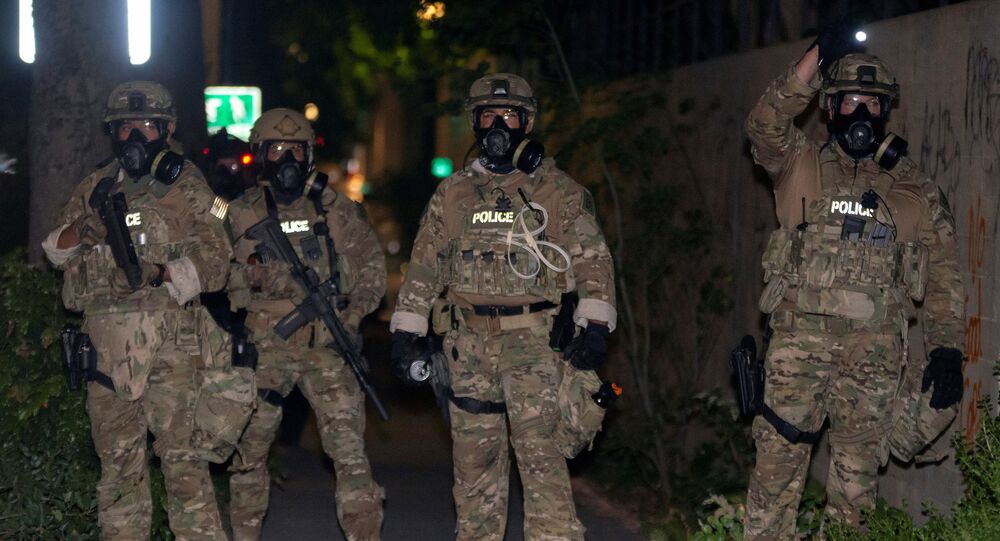 Dems have pointed the finger at US President Donald Trump over a recent deployment of federal troops to Portland, Oregon, accusing DHS and other federal agents of ramping up violence and using life-threatening tactics. US observers have discussed what happened in the city and whether the Dems' accusations are correct.

Partisan tensions have escalated over the Customs and Border Protection units' involvement in dispersing protests in Portland with the city's mayor demanding that the feds leave the city, while US Attorney for Oregon, Billy Williams, calls for an investigation into DHS conduct.

According to Oregon Public Broadcasting, federal law enforcement officers who refused to identify themselves were documented grabbing protesters off of Portland streets and driving them away in unmarked minivans. "The US government should not be using unidentified federal officers as a secret police force to terrorize US citizens & violate their constitutional rights. This is outrageous", Massachusetts Democratic Senator Elizabeth Warren tweeted on Friday.

'Obviously the Violent Mob Must be Stopped'

The claim that the militarized federal agents seen in the videos have no obvious markings or identification is false, argues Pamela Geller, a political activist, commentator and editor-in-chief of the Geller Report.

"They were clearly marked as DHS agents", she says. "They removed only their name tags, because leftists keep doxing them and endangering their families. No one who is in the slightest degree concerned with justice could support such doxing".

I told the Acting Secretary that my biggest immediate concern is the violence federal officers brought to our streets in recent days, and the life-threatening tactics his agents use. We do not need or want their help.

​Earlier, the acting Customs and Border Protection commissioner, Mark Morgan, rebutted accusations voiced by Portland Mayor Ted Wheeler who stated that the federal agents had "ratcheted up the tension on [the city's] streets." According to Morgan, the agents detained Portland protesters on reasonable suspicion or probable cause that these individuals were either involved in destroying federal property, or intentionally trying to physically harm a federal agent or officer.

These valiant men and women have defended our institutions of justice against violent anarchists for 48 straight days. We will prevail. pic.twitter.com/Qo9XoCyH2N

​On 16 July, the acting Secretary of the Department Homeland Security, Chad F. Wolf, decried what he characterized as a 47-day siege imposed on Portland by a "violent mob" as well as what he suggests if the local political leaders' refusal to restore order. Wolf also listed numerous instances of "lawless destruction and violence of the past several weeks" inflicted by protesters on federal property and agents.

"Obviously the violent mob must be stopped from terrorising innocent civilians", says Geller.

According to Portland's law enforcement authorities, downtown businesses in the city sustained an estimated $23 million in damages and lost business over violence which erupted following the killing of George Floyd, an African American, by white police officers.

"Portland's mayor is resisting efforts to restore law and order because the rioters and looters constitute a large part of his base, and because he believes that the appearance of chaos will weaken Trump's chances for reelection", the right-wing political activist opines, adding that other Democratic mayors and governors are apparently guided by a similar rationale.

"They, too, are pandering to their hard-left base", she notes. "We already see the consequences in New York City, which is far more dangerous than it was just a few months ago. Speaker of the House Pelosi is demonstrably supporting the violence".

Dems' Claim That Trump is 'Authoritarian' Ruler is Hypocritical

The US Customs and Border Protection (CPB) is participating in a special task force established by the Department of Homeland Security (DHS) under a pretext of protecting federal property and courthouses, elaborates Max Parry, an American independent journalist, adding that "it appears these agencies are operating in unprecedented grey areas and seemingly outside their jurisdiction, particularly the border patrol".

"Agents from the Department of Homeland Security do not have to identify themselves with regalia, and we already saw this during the protests in DC", he notes. "However, the nation's capital is under distinct legal authority of the federal government, unlike Oregon".

This should be a much bigger story. pic.twitter.com/MZ4lNGJgm4

​The journalist notes that the federal government does not have the statutory authority to deploy federal law enforcement agencies in the same manner in other states, as per federal law and the Posse Comitatus Act, "especially while circumventing the objections by local Oregon state officials, who have not requested federal assistance, but in Portland they appear to be operating as if they do".

Earlier, US President Donald Trump dropped a hint that he would override the Posse Comitatus Act, which prohibits federal troops from performing certain domestic law enforcement actions, by invoking the 1807 Insurrection Act. This early 19th century law has been used several times to deal with riots but has not been enacted since 1992.

"In my view it is actually unclear whether these officers are in fact abusing their authorities, but the fact that we do not know for sure makes it more troubling", Parry opines. "This speaks to the inherent danger behind the sweeping, vague powers handed to these agencies after 9/11".

This is right out of the authoritarian playbook. Americans have rights and they cannot be disregarded by unidentified uniformed agents. We need answers. Now.https://t.co/JlADJ2JwlI

​At the same time, the journalist says Dems are wrong when accusing Trump of authoritarianism: "Anything Democrats like Elizabeth Warren have to say on the matter is hypocritical, given that the vast majority of them voted to extend the domestic police state of the Patriot Act and hand Trump dangerous surveillance powers".

What the Dems are denouncing as an "authoritarian playbook" is the same policies both parties have been pursuing for the last two decades, according to Parry.

"What occurred in Portland or in the case of the Border Patrol drone being used to spy on protesters in Minneapolis has been part of a decades-long process since 9/11 authorised by both political parties, not something unique to Trump and his perceived autocratic tendencies", the journalist underscores.

The Feds Will Continue to Do Their Job

Both observers expect that the federal government will continue to deploy troops to cities to stop protests.

"I certainly hope they do and fully expect that the feds will continue", Geller opines.

While Parry is concerned about a pattern of providing federal military forces with "such broad and vague powers" that override the US Constitution, and which has continued to expand over the last three administrations, she argues that Trump is acting within his constitutional rights.

According to Geller, the president "has to weigh doing so against the claims that he is 'waging war against the American people' that are certain to come from the sinister, anti-American left".

"Trump's motives are to protect and defend the American people, keep us safe in our own cities and towns, defend our Constitutional rights", she underscores. "The Democrats' motives are just the opposite. They mean to harass, intimidate, frighten the body politic into giving in to what they want - authoritarian control of every basic aspect of daily life. They are at war with the foundational principles of this great country – individual rights, freedom of speech, and equality for all before the law".