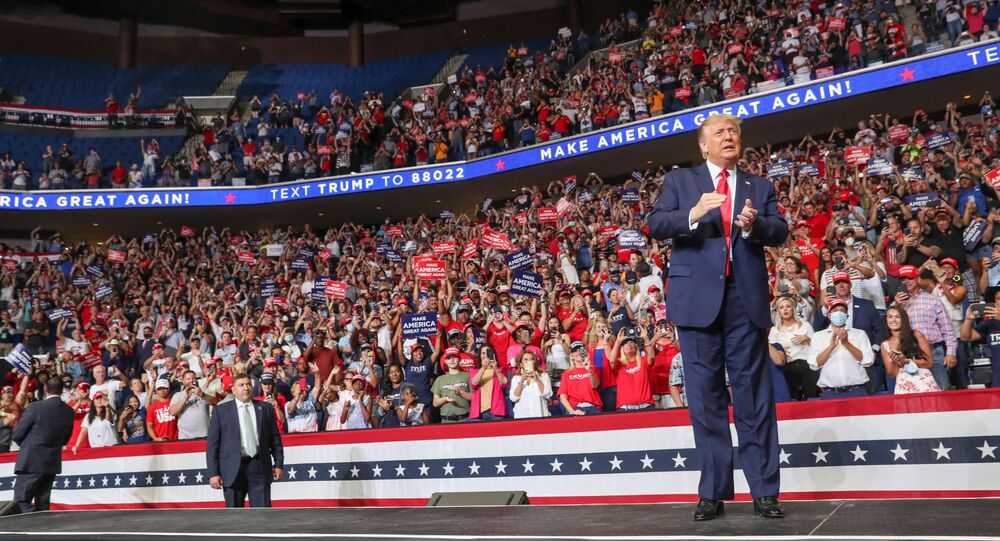 Trump's newly-appointed 2020 campaign manager Bill Stepien, who worked for George W. Bush, John McCain and Rudy Giuliani, has embarked on a mission to galvanise the president's supporters in the remaining four months before the elections. US political observers discuss whether he will be able to help the GOP campaign.

On 15 July, US President Donald Trump abruptly reshuffled his 2020 campaign management group, replacing Brad Parscale with Bill Stepien, who joined the president's team in August 2016 and previously worked in the capacity of White House political director, senior political adviser and, most recently, as deputy manager for Trump's campaign.

The move came after the campaign's failure to fill all the seats for the president's June rally in Tulsa, Oklahoma, amid sliding poll numbers. According to national poll aggregator FiveThirtyEight, Biden is leading the incumbent president by an average of 9.1 percentage points, with Trump's standing apparently eroded by his administration's handling of both the coronavirus pandemic and nationwide anti-police-brutality and anti-racism protests.

Who is Bill Stepien & How Can He Help Trump?

"This move is a result of the Tulsa rally failure specifically and Trump’s lagging poll numbers more generally", acknowledged Dan Eberhart, an Arizona-based oil executive and a major GOP donor. "Trump has made a significant change to reset his campaign in the nick of time. Trump needs to stop his slide in support with seniors".

The shakeup, occurring just four months before the November elections, has triggered heated debate. While ex-White House Press Secretary Dana Perino admitted that Stepien "has a record of winning races that are against the odds", Politico drew attention to friction with his former boss, New Jersey Governor Chris Christie, who fired Stepien following the 2014 'Bridgegate' political scandal. Six years ago, Christie's political appointees colluded to create traffic jams in Fort Lee in a retributive attack against the borough's mayor, Mark Sokolich. While no evidence of Stepien's involvement was found, he was known to be in the loop in Christie's administration.

Stepien has also been a political director for the White House and "has his fingerprints all over many congressional and house races since Trump entered the White House" which allowed him to "leapfrog Parscale to take the top spot", Eberhart remarked.

Citing a "source with knowledge of the hire" CNN speculated that Steve Bannon, then Trump's top campaign strategist, played a key role in hiring Stepien in 2016. Reports also suggest that the newly-appointed Trump campaign manager was promoted to the role by Jared Kushner, Trump's senior adviser and son-in-law.

"The thing to remember is Jared Kushner is really in charge", asserted Eberhart. "Stepien is a Jared ally".

© AP Photo / Alex Brandon
In this Thursday, Dec. 7, 2017, file photo, U.S. President Donald Trump speaks with White House Senior Adviser Jared Kushner as he departs after a reception in the East Room of the White House, in Washington

Changing horses in midstream is not a good look, suggests John Truscott, a veteran Republican consultant in Michigan who previously worked for the former of governor of Michigan John Engler (R).

"Every campaign has a plan... stick to it", he says. "The president seems to be all over the place, which reinforces the image of chaos. Stick to the darn plan".

The Republican consultant foresees that there is likely to be a digital campaign in the near future.

"We’ll see which campaign emerges as the most proficient", he notes. "Debates will have to occur at some point - who knows what they’ll look like - but that will help determine the level of enthusiasm for each candidate".

At the same time, the Trump campaign should hijack the initiative, which currently appears to be in the hands of the Dems, according to David Woodard, a Clemson University political scientist and former GOP political consultant. Trump is being handed issues by the Democrats in their protests and behavior, while the president's campaign is not taking advantage of situations that could help the president, he argues.

"The bestselling book from the previous riots in 1968 applies today: 'The Unheavenly City'", he says. "Rioting is expected, but it is not a winning political methodology. Think of what happened during the 'long hot summer' of 1967, which led to a campaign by Richard Nixon for 'law and order'. Nixon won in a landslide in 1972".

Though Biden is obviously enjoying a natural advantage right now, "he hasn't really faced his opposition yet", the political scientist believes.

"The Trump strategy will be to confront Biden with words of his supporters, and then trap him in a response" he says. "The gas goes out of a leading contender's balloon quickly if it is confronted and screws up. That is the only way Trump can win".

Eberhart opines that Trump should bring focus to US economic issues as a means of convincing centrist voters that Biden "is bad for the economy".

Earlier, Biden rolled out a $700-billion "Made in All of America" plan which prompted the ex-vice president's opponents to accuse him of plagiarism, as many saw the plan's branding as similar to the president's. The presumptive Democratic nominee then put forward his ambitious $2-trillion "green" strategy which seeks to achieve net-zero carbon emissions by 2050. Assessing Biden's plan, Trump re-election campaign national press secretary Hogan Gidley declared that it appears "more like a socialist manifesto that promises to massively raise taxes, eliminate jobs in the coal, oil or natural gas industries, and crush the middle class."