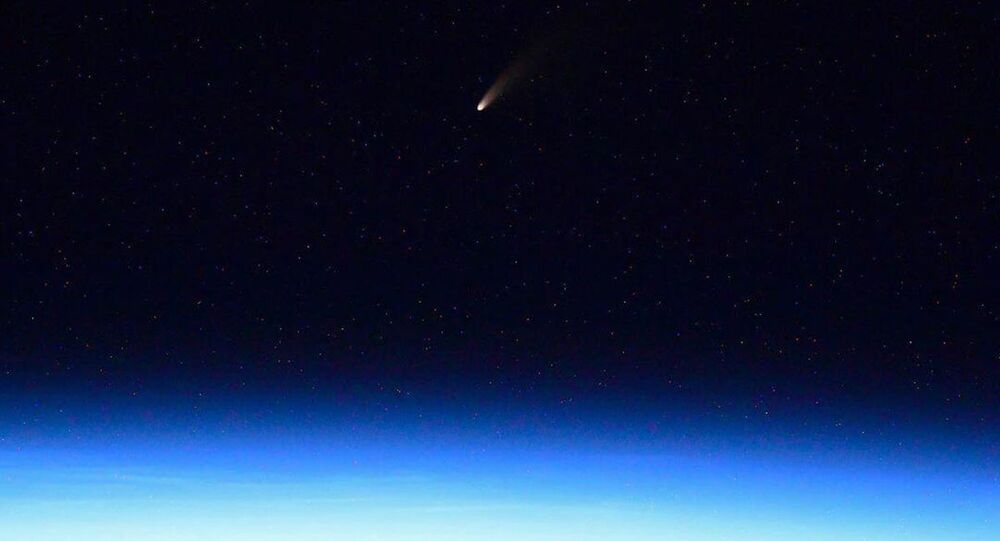 Space: ‘This is One of the First Visible Comets that We've Been Able to See for Years’, Expert Says

Stargazers around the world have been marvelling at the newly discovered Neowise comet which is set to be visible to the naked eye over British skies this month. The mountain-sized extra-terrestrial object made its closest approach to the sun on 3 July and is now shining brightly in the night skies.

Dr Ian Whittaker, a Senior Lecturer in Physics at Nottingham Trent University, explains what is so special about this comet.

Sputnik: What makes this Neowise comet so significant in your eyes?

Ian Whittaker: So, for me, what's interesting about it is that this is one of the first really visible comets that we've been able to see with the naked eye for so many years now. The last one was actually in 1997, so about 23 years ago and that was comet Hale Bopp, and for those of us in the northern hemisphere, of course, those living in the southern hemisphere got to see comet McNaught in 2007 which was absolutely amazing and very very bright. But for us, as I say we get to see comet Neowise now and well people are perhaps a little bit nervous about going out in the evening somewhere where they might be crowded in; this is a really good thing you can go and do outside, in the evenings, good education to get you interested in space science and go and take a picture this comet or just have a look at it.

Ian Whittaker: Well yes, you've got these two absolutely beautiful streaks coming off the comet. It's actually fairly common with most comets to have this - you don't get it with any other sort of objects like asteroids, or anything else - and it comes from what the comet is actually made of. All comments have been described previously as dirty snowballs and what that means is, it's a mixture of rock and ice and dust, and this ice, it's not just water ice, it's carbon dioxide ice, it's got some ammonia in there. It's got some other forms of ice as well. Now as this comes closer and closer towards the sun, the top layers of it get energised, they get hit by the sun's rays and by particles coming in from the sun, and the top layers just sort of come off, flake off and move away. So, you have all this dust and ice which tends to be neutral, in terms of charge, flowing away from the direction that the comet's going. So that's one of your tails. But with all this material coming from the sun and the radiation, so the light that's coming from it, that can also cause the ice to melt and turn into water vapour and carbon dioxide ice to sublimate, so it turns straight to gas, and this is sometimes electrically charged. Now as the sun has a magnetic field which is flowing away, all this electrically charged material actually latches onto this magnetic field and moves away. So, you have these two tails, one which is opposite the direction of the comet's actual movement, and one directly away from the sun, and that's why you have these two individual tails. Now the neutral one is a lot easier to see because it's usually made up of this ice and ice is very, very reflective. Whereas the charged one doesn't have this reflectivity. So, what's happening is light from the sun hits it, energises it a bit and then it releases its own light, so it's a luminescence process but it's not as bright as the reflection.

Sputnik: How can stargazers spot Neowise in the coming days and how close to the Earth is it expected to travel?

Ian Whittaker: If you want to try and spot it, my advice to you is, first of all, find somewhere as dark as you possibly can. Light pollution is a big issue for astronomers and so if you can get out of the city somewhere, a field nearby maybe, and have a look for it that would be great. It's going to be in the northwest direction but it's going to be quite close to the horizon. So you're going to not necessarily look up into the sky but look sort of along the ground if you like towards the edge. Now the further north you are in the country, the easier this is going to be for you. If you're right down at the bottom end of the country, you're going to have a bit more of a tricky time. That means that if there are loads of trees nearby, it might be hidden behind those. What you're looking for is a smudge in the sky. Now there have been absolutely beautiful pictures taken by loads of amateur astronomers and by the International Space Station as well. This comet you can see the nucleus there, the actual comment itself, and all these beautiful tails coming off. You're probably not going to be able to see that yourself in the sky. What you're going to see is just like a smudge. Now what you can do is you can get yourself some binoculars and if you've got binoculars, you're going to see this much sharper and you're going to be able to make out some of the details. But if you're interested in actually taking a picture of it, and you want to get this professional look to it, what you need is a camera that hasn't changeable exposure time. So you need to be able to have the camera open with the lens open taking the picture for about 15/20 seconds, something like that, and that should get you this beautiful image. You can do that have a tripod set up, you can do it with phone cameras, I think there are apps available to do it with. In terms of how close it's actually going to be, it's not close at all. It goes around the sun but it's about 70% of the distance between the Earth and the Sun so it's much further out the Mars or Venus's when it's as close to us as it possibly can be. So there's to worry about in terms of the collision there. I think we should be okay.