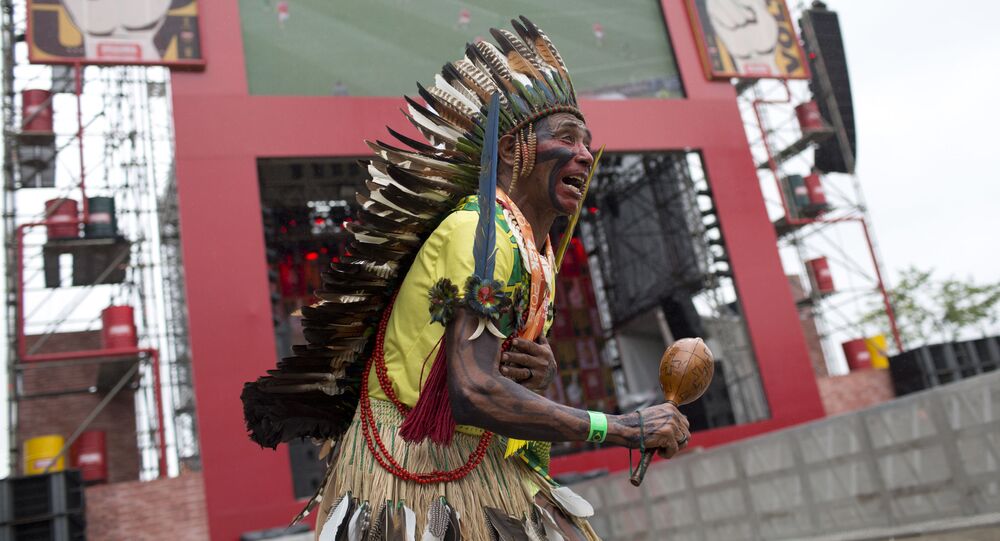 The Bolsonaro government has no interest in shielding Brazilian Indians from COVID-19, on the contrary, it has long sought to open indigenous lands for mining and agribusiness, considering native peoples to be only a stumbling block, notes indigenous leader Weibe Tapeba and Brazilian scholar Gustavo Guerreiro.

Brazil has become a new hotspot for COVID-19 second only to the US in the number of confirmed cases and fatalities. Even the Brazilian president, Jair Bolsonaro, who long shrugged off the danger of the coronavirus pandemic, tested positive for the virus.

Meanwhile, human rights activists are ringing the alarm over soaring fatalities among the country's indigenous population. As of 15 July, Brazil's Department of Indigenous Health Care (DIHC-DASI) registered 10,889 COVID infections and 218 deaths among Brazilian Indians, while the overall number of cases in the country mounted over 1.96 million.

Mortality rates among Brazilian Indians are almost twice the national rate (12.6% versus 6.4%), as Articulation of the Indigenous Peoples of Brazil (APIB), an advocacy group, found in June.

"The indigenous peoples of Brazil have been vulnerable since the day the Kariwas (white man) set foot in our territories", says Weibe Tapeba, a Tapeba Indigenous People leader and legal advisor to the State Federation of Indigenous Peoples of Ceará – FEPOINCE.

Tapeba emphasises that the Brazilian government failed to adopt efficient measures to combat the spread of the disease in indigenous territories.

"The need to expand human resources, infrastructure ranging from the need to build basic health units and the provision of beds to the need for quick tests, food baskets and personal hygiene kits, would be fundamental in this pandemic moment", the indigenous leader observes.

There are only about 896,000 native Brazilians – distributed among 305 unique ethnic groups – in the country of 209.5 million. Given that many Amazonian tribe numbers are fewer than 1,000, the coronavirus pandemic is threatening to exterminate them.

"The indigenous people are, historically, an ethnic group marginalized by the Brazilian state. Public services are much more precarious in indigenous villages", states Gustavo Guerreiro, executive editor of the journal World Tensions and a member of the Brazilian Centre for Solidarity with Peoples and Fight for Peace (CEBRAPAZ).

While indigenous groups have shown a great commitment to maintaining social isolation and practicing self-protection, regular incursions of miners, loggers and illegal settlers into their territories have largely contributed to the spike in COVID-19 cases among Brazilian native peoples, according to the observers.

For its part, the country's Ministry of Health has yet to roll out a meaningful plan to combat the pandemic among indigenous tribes, Guerreiro points out. Having failed to stretch a helping hand to Brazilian Indians, the government is further exacerbating the situation, according to the scholar.

"In his most recent act, Bolsonaro vetoed several crucial points of a law that protects Indians during the pandemic", he says.

On 8 July, the Brazilian president vetoed provisions of a legislation earlier approved by the Congress which obligated the federal government to provide indigenous communities with drinking water, disinfectants and hospital beds amid the coronavirus pandemic. In addition, he turned down funding for the states and local governments envisioning emergency aid for native peoples as well as greater internet access for indigenous communities, which was meant to prevent them from travelling to urban centres. In justifying his decision, Bolsonaro claimed that the provisions were “against the public interest” and “unconstitutional,” as they created excessive expenses for the federal government.

"However, in a historic decision, the Supreme Court forced the president to take necessary measures to preserve and save the lives of the Indians", he elaborates, referring to the ruling by Justice Luís Roberto Barroso issued the same day, in response to a complaint from the Articulation of the Indigenous Peoples of Brazil and the country's six opposition political parties.

Neither Weibe Tapeba nor Gustavo Guerreiro have been surprised by the Bolsonaro government's actions: according to them, it has been "anti-indigenous" from the start.

"The Brazilian government has the mark of structural racism, prejudice for ethnicity and of not recognizing cultural diversity in our country", argues Tapeba. "Still a candidate, the current president already categorically indicated that he would be at the side of agribusiness and that he would not demarcate any other indigenous land in the country".

"It is not just an omission or negligence", stresses the indigenous leader. "It is the materialisation of a power project that tries to exterminate us".

In August 2019, Bolsonaro was quoted as saying: "As long as I am president, no indigenous land will be demarcated. They own 14 percent of the national territory". On another occasion, the Brazilian president noted: "Indians are undoubtedly changing … They are increasingly becoming human beings just like us".

There are at least 610 indigenous lands claimed by Brazilian native peoples which are still pending government action, according to Tapeba. However, Brazilian local authorities, backed by farmers and agribusiness companies, appear to deliberately drag down the solution of the issue through lengthy administrative processes.

"The judicialization tactic has led to processes of demarcation of territories such as that of my Tapeba People, dragging on for decades", the indigenous leader says. "In the case of my Tapeba People, this process has been going on since the beginning of the 1980s and with no end in sight".

The land rights of indigenous communities were enshrined in the country's Constitution of 1988, which recognized them as the first and natural owners of the land, setting a five-year deadline to finalise the demarcation. However, 32 years have passed and this process has not yet been concluded, remaining at the mercy of lengthy legal proceedings and political pressure in the parliamentary sphere, according to Guerreiro.

"All government actions are directed against the continuation of the process of demarcation of indigenous lands, by environmental deregulation and the exploitation of mineral resources in their territories", the scholar notes. "Bolsonaro does not show the slightest respect for constitutional provisions and international treaties that aim to protect the Indians' way of life, their resources and their culture".

© AP Photo / Eraldo Peres
A young Pankararu Indian, in traditional dress, stands near a pitched tent at an encampment in front of the Brazilian National Congress building in Brasilia, Brazil, Monday May 2, 2011. A variety of tribal groups plan to camp out in front of the government building until Thursday, in protest against the construction of the Belo Monte hydroelectric plant in the Amazon rainforest.

Once Bolsonario assumed the presidency he tried to shut down the National Indian Foundation (FUNAI), the Brazilian government body establishing and carrying out policies relating to Brazilian Indians, which includes the objective of demarcating indigenous lands, Tapeba underlines.

The president's decree further envisaged taking away the responsibility for indigenous land demarcation from the FUNAI and handing it over to the country's agriculture ministry, a move supported by the agricultural lobby.

"The measures were materialized by means of an administrative reform decree, but it was reversed through a decision of the Supreme Federal Court (STF), which was once under pressure from several indigenous organizations and even political parties", the Indian leader says.

Bolsonaro did not give up, however, as, being unable to dismantle the body altogether, the president considerably slashed its budget, Tapeba notes, as well as acting to weaken environmental protection mechanisms in the country.

"The government's clear project is to open indigenous lands for the exploitation of mineral wealth, for agribusiness, for the implantation of large enterprises and to try to legalise what they call 'self-declaration' of property, facilitating a fraud in the titling of lands incident in indigenous territories", the indigenous leader warns.