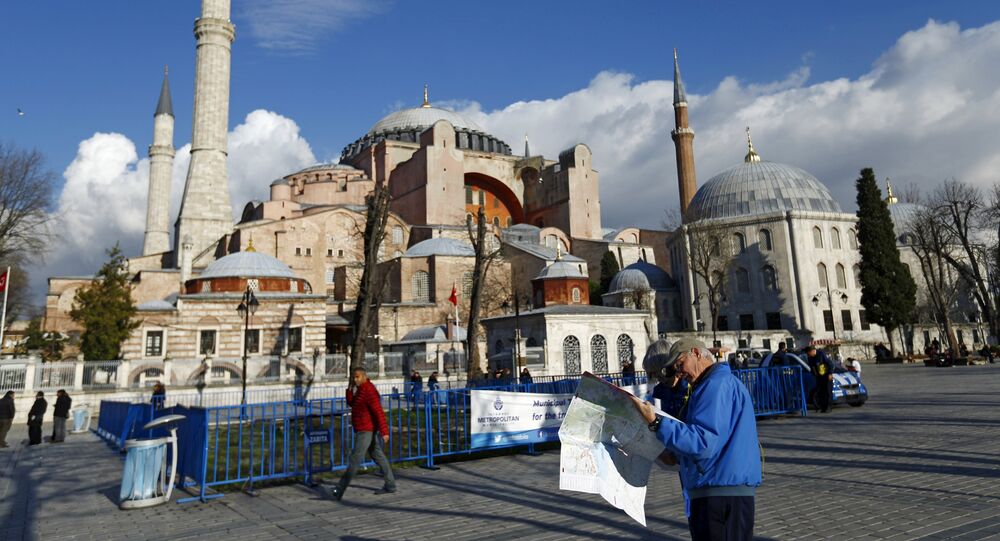 Hagia Sophia: What Could Have Prompted Ankara to Convert UNESCO World Heritage Site Into Mosque?

On Friday, Turkish President Recep Tayyip Erdogan confirmed that he had signed a decree converting Istanbul’s historic Hagia Sophia into a mosque which will open for Muslim prayers on 24 July.

UNESCO has expressed “deep regret” over Turkey's decision to convert Hagia Sophia back into a mosque after a court annulled a 1934 presidential decree that made it a museum.

"Hagia Sophia is an architectural masterpiece and a unique testimony to interactions between Europe and Asia over the centuries. Its status as a museum reflects the universal nature of its heritage, and makes it a powerful symbol for dialogue”, UNESCO Director-General Audrey Azoulay pointed out.

He was echoed by the US State Department who voiced disappointment about Ankara’s move “to change the status of Hagia Sophia”, which is “an important part of the 'Historic Sites of Istanbul' UNESCO World Heritage Site”.

The statement followed Turkish presidential spokesperson Ibrahim Kalin telling the Anadolu news agency that “a loss from the world's heritage is not in question”.

"Opening up Hagia Sophia to worship doesn't keep local or foreign tourists from visiting the site”, he said, vowing that Turkey would preserve the unique Christian icons and mosaic images of Jesus Christ in the building. Kalin, however, did not elaborate on the matter, fuelling concerns about the future of these Christian shrines.

The statement came after Turkish President Recep Tayyip Erdogan confirmed the conversion decision on Friday, adding that the first Muslim prayers in Hagia Sopia are expected to be performed on 24 July and that admission to the mosque will be free for everyone.

Formerly known as the Church of the Holy Wisdom, Hagia Sopia became the main Orthodox cathedral in 1261 and almost two centuries later, it was turned into a mosque. In 1931, it was closed to the public and became a museum in 1935 as part of a decree by Mustafa Kemal Ataturk.

According to Istanbul-based journalist Merdan Yanardag, “an attempt to make a mosque from Hagia Sophia again is absolutely a political decision”.

He argued that by taking this step, Turkish authorities “have returned to their narrow ideological goals, since they were politically exhausted”.

“I do not think that Turkey needs a new mosque. […] In Istanbul, there are enough mosques which are not filled even during Friday prayers, including the Blue Mosque. So one should not think that this will happen to Hagia Sophia […]”, Yanardag said.

He recalled that the Islamic Republic of Iran has twice as few mosques as Turkey, which, however, continues constructing such facilities.

“I believe that the desire to turn Hagia Sophia again into a mosque is the pursuit of narrow Islamic goals aimed at using people’s religious feelings”, Yanardag asserted.

© REUTERS / Murad Sezer
Muslims gather for evening prayers in front of the Hagia Sophia or Ayasofya, after a court decision that paves the way for it to be converted from a museum back into a mosque, in Istanbul, Turkey, July 10, 2020

The view was supported by Turkish theologian Cemil Kilic, who claimed it is the reaction of worshippers that could play an important role in this whole story. He called for taking steps that will offend neither the feelings of Christians nor those of Muslims.

“Also, the conversion of Hagia Sophia into a mosque could lead to an increase in anti-Islamic sentiments across the world. In particular, mosques in areas where Muslims are outnumbered may be at risk”, he underlined.

He recalled that the Christian world perceives Hagia Sophia as “a temple with symbolic significance”, which is why Kilic said “we should leave religious wars behind and focus on maintaining world peace”.

“Peace must be preserved even despite the controversial decision on the future of Hagia Sophia”, he concluded.