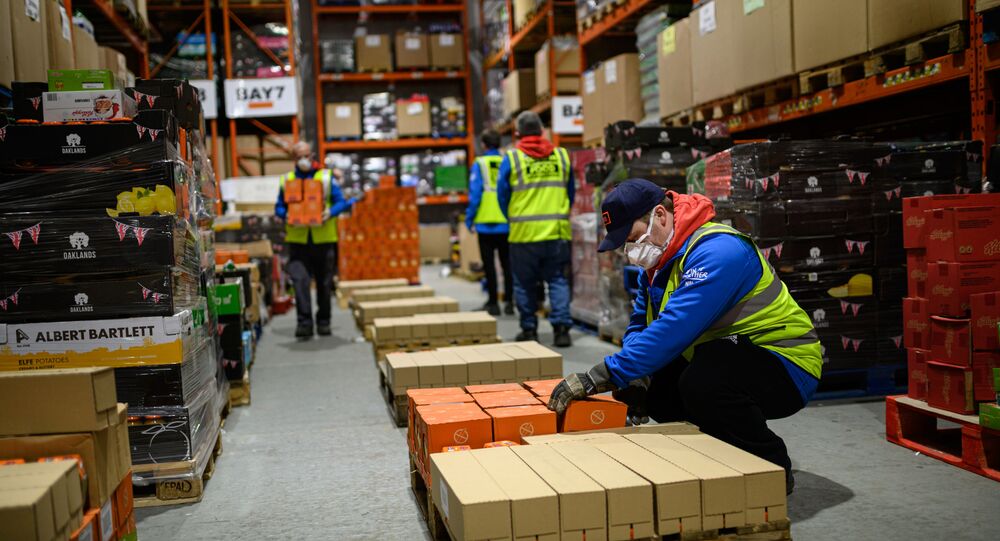 COVID: 'Demand for Food Will Stay at High Level and Probably Get Even More Severe,' Expert Says

Foodbanks across Britain have called on the Boris Johnson and the UK to take urgent action as more people are forced to depend on their services because they can’t afford food.

Looking at how demand for food has changed because of the coronavirus and subsequent the lockdown, Sputnik spoke to Professor Peter Taylor-Gooby OBE and Professor of Social Policy at the University of Kent, in this interview.

Sputnik: What effect has the coronavirus had on the supply of food, donations and also the demand on food banks across the country?

Peter Taylor-Gooby: There's been a massive increase in demand right across the UK. It's very noticeable in the numbers of people coming in. In the local food bank in Canterbury where I'm involved, we had a fourfold increase in demand in a week.

Nationally, the Trussell Trust, which deals with about two-thirds of food banks, report increases of about three times and the independent Food Bank Alliance Network, which also operates across the remaining food banks, reports about the same increase.

So, it's a huge increase in demand. Its people being thrown out of work by the virus, particularly the people who are not entitled to furlough, who go on to Universal Credit, see their incomes collapsing and are just unable to make ends meet.

Also, it's been a double whammy because the donations of food, which food banks rely on, have collapsed as well because there's a lot of problems with the food distribution network.

People, as you remember, were panic buying in March, particularly in April this year, so that the food supply corrected in supermarkets and other food collection points fell dramatically. This meant that food banks had to buy in food from 'cash and carry', they launched the appeals to do so and it's those appeals we've been looking at in our research.

Sputnik: What problems around hunger and increased food usage will occur because of this significant increase in demand from food banks?

Peter Taylor-Gooby: We anticipate that the demand for food will stay at a high level and probably get even more severe as time goes on because we're moving through the coronavirus pandemic crisis now but we're moving into a crisis which will be a recession - probably the sharpest recession this country has seen since the 1920s - and very steep rises in unemployment.

All the official agencies, the Bank of England, the Office of Budgetary Responsibility and so on are predicting that unemployment will go up to 10-12%. That's 4/5 million people and that's going to lead to a massive demand on food banks.

As coronavirus has receded a bit and the number of cases have declined we've found that the amounts of money coming in from appeals are going down, and that's what our national data shows, but what we're worried about is that the demands on food banks will stay at a very high level but the resources available to meet those demands won't match them.

So, food banks won't be able to meet the need and that's a problem we may face as we move into the recession and very high unemployment.

Sputnik: What should the government in the UK be doing to address these issues of demand and ultimately the issue of hunger? Is there anything else that international bodies like the UN or the World Health Organisation, do to help countries like the UK or other countries around the world?

© Sputnik
Hundreds of UK Royal Staffers Face Layoffs Over COVID-19-Induced Funding Losses
Peter Taylor-Gooby: The UK is a rich country and it is a scandal I think that we have poverty in a country that is as rich and successful as ours. That means that what the government has to do really is look at the whole benefits system.

Universal Credit is not working satisfactorily but as I said the UK is a rich country. Other countries around the world are very much harder hit by coronavirus and will be hard to hit by recessions afterwards.

There of course, if you're a country like India or Indonesia, you've got a very cruel choice between locking down to save lives from the pandemic and the pandemic crisis occurs; in the knowledge that people who are just scraping by on the breadline will find it very difficult to survive and really we need an international effort on this.

I know that various agencies are trying to coordinate something, but they're not having so much success really. If we want to meet people's needs effectively, we really have to arrange serious aid efforts from the developed world to the less developed world. Otherwise, we get famines.