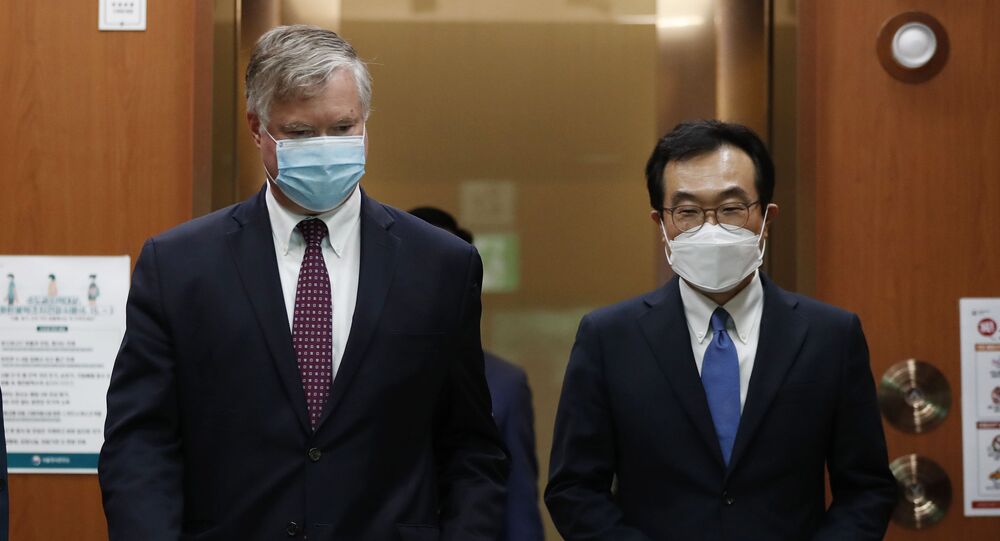 US Deputy Secretary of State Stephen Biegun, who is currently on a trip to Seoul and Tokyo to discuss North Korea's denuclearization, has only provided symbolic rather than concrete actions toward rekindling diplomacy with Pyongyang, Gregory Elich, a member of the Solidarity Committee for Democracy and Peace in Korea, told Sputnik Wednesday.

Just hours before Biegun arrived in Seoul on Tuesday, Pyongyang claimed that it has “no intention to sit face to face with the United States,” NDTV reported. North Korea also accused Washington of harboring a “hostile policy” toward it.

However, Biegun’s trip has less to do with holding negotiations with North Korea and more to do with ensuring that South Korea still depends on the US, especially regarding inter-Korean relations, Elich pointed out.

“The North Koreans are extremely frustrated with South Korean President Moon Jae In, because he premises any improvement on inter-Korean relations on getting permission from the US, and the US always says no to whatever South Korea requests. So there is a US-South Korea working group that the US established that is supposed to coordinate anything relating to inter-Korean relations,” Elich told Loud & Clear host Brian Becker.

“So, lately in the South Korean press, there have been quite a lot of editorials calling for relooking at the working group and acting in a more independent manner … that inter-Korean relations should take precedence over seeking permission from the US,” he added.

“Stephen Biegun is there to try to keep South Koreans in line ... So, even though Stephen Biegun said he strongly supports efforts to improve inter-Korean relations, that’s just empty phraseology. He wants to make sure that South Korea still depends on the US,” Elich continued.

In addition, part of Biegun’s plan is to continue to foment an anti-China sentiment in Asia while also reactivating the lapsed military intelligence-sharing agreement between Japan and North Korea, Elich said.

“He wants to shore up the tripartite alliance with Japan and South Korea and build that up into an anti-China alliance. That’s part of the US’ Indo-Pacific strategy, and he also wants to get Japan and Korea on board with the Economic Prosperity Network,” Elich added.

"The Trump administration has previously voiced its intent to remove global industrial supply chains from China, with officials explaining that the US is trying to create an Economic Prosperity Network, an alliance of partners to “move the global economy forward,” as US Secretary of State Mike Pompeo put it, without China.

The relationship between Washington and Pyongyang took a turn for the worse after the Hanoi, Vietnam, summit in February 2019. Although there were high hopes for the talks, the summit ended without a deal due to disagreements regarding sanctions relief timing. Negotiations have been stalled since then, with North Korea stating that the US has failed to propose a realistic path to denuclearization.

“He’s [Biegun’s] often talked about offering a more flexible position, and his words sound good, but I think there’s a lot less than meets the eye with him. So, lets look at exactly what he’s specifying, at the points that he is willing to flexible on: North Korea and the US opening liaison offices in each other’s capital, permitting a few people to people talks, an end-of-war declaration - basically a piece of paper acknowledging that the Korean War came to an end in 1953 - and humanitarian aid, although he doesn't specify whether that would mean US providing humanitarian aid or would it mean the US no longer stopping [other] nations from providing humanitarian aid,” Elich explained.