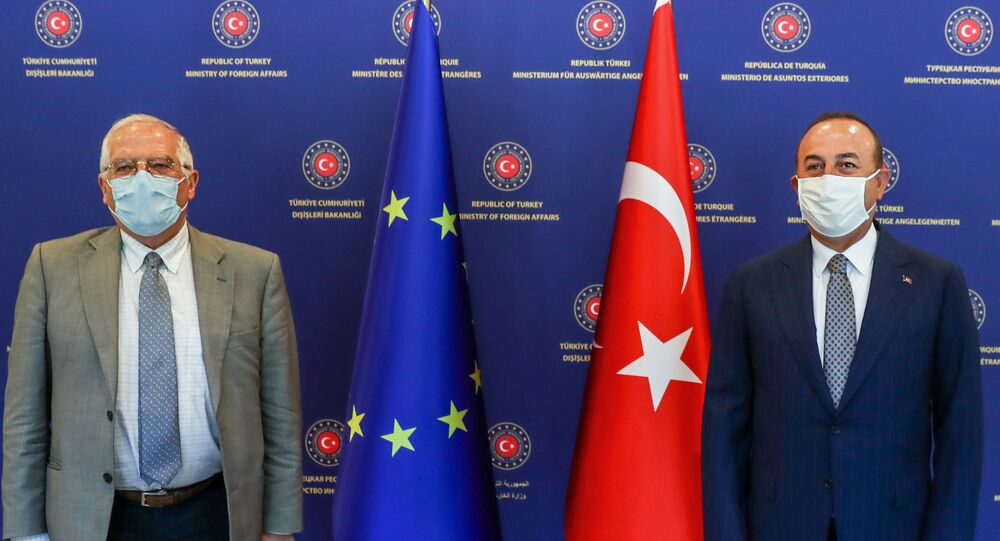 The EU Foreign Affairs Council scheduled for 13 July promises to be most interesting and intriguing. Earlier it was reported that the EU may take additional steps against Ankara over the drilling in Cyprus' exclusive economic zone.

Hasan Unal, a political scientist from Istanbul-based Maltepe University’s Political Science and International Relations Department, commenting in an interview with Sputnik on the situation with EU-Turkey relations and their prospects in the light of the upcoming 13 July meeting where a broad range of Turkey-EU relations will be discussed, stresses that the emerging tensions between France and Turkey over the incident in the Eastern Mediterranean have exacerbated the crisis phenomena in relations between Ankara and Brussels.

"For a long time, we have seen demands from Greece and the Greek Cypriot Administration for sanctions measures against Turkey", he says.

However, the political expert further notes that despite these demands, the EU has never imposed harsh anti-Turkish sanctions, understanding the importance of existing trade relations with Turkey. But now France has also become a party to the conflict, which has exacerbated the situation.

"France is, so to speak, a "political leader of the EU". So if Paris uses its channels to push forward a tough response to Ankara, we can expect quite severe sanctions from Brussels, which was not previously the case against Turkey", Unal believes.

At the same time, the expert has noted the important bargaining chips Turkey has in its relations with the EU:

"There's something France doesn't understand. Today, Turkey, owing to the strength of its geopolitical location, has if not more, then certainly not less weight in NATO than France. For this reason, if the EU imposes severe sanctions upon Turkey, then Ankara will block the NATO enlargement process, which in turn will hinder EU enlargement as these are interrelated processes”, Unal says.

According to the expert, relations with Turkey are too important to sacrifice to the whims of Macron. Therefore, although EU member states speak out against Turkey behind closed doors, at NATO meetings they smile to their face.

"This situation shows us that it is not so easy to impose tough sanctions against Turkey", the expert notes.

According to Hasan Unal, Turkey should resort to more effective diplomacy before it is forced to use its leverage against the EU. Since Turkey has fallen out with all the countries in the region, if it were to have good relations today – at least with Israel and Egypt – it would have greatly reduced tensions with France. Getting Germany to Turkey's side would also have prevented the escalation of tensions, the expert believes.

“In short, Ankara should pursue more flexible diplomacy and be open to cooperation with other players in various fields”, Unal explains.

In conclusion, the political expert notes that Turkey needs to definitively abandon its “unfeasible and useless aspiration to become a member of the EU, and focus on obtaining a special privileged status with the Union and a free trade agreement instead of the current customs union agreement, which will allow Turkey to avoid restrictions on EU duties and tariffs when trading with third countries”.

Turkey-EU relations deteriorated after the European Parliament in a plenary session in Strasbourg on 24 November approved a resolution calling for the freezing of negotiations on Turkey's accession to the EU in light of the actions of the Turkish authorities, prompting a strong reaction in Ankara.