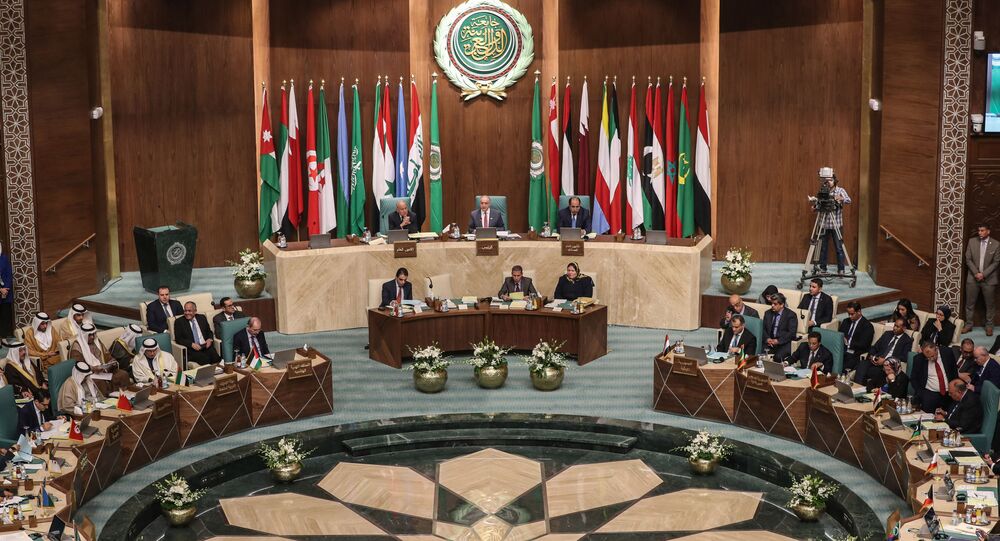 Arab World Distances Itself From West's Confrontational Policy Towards China

China remains a reliable political and economic partner to the Arab states. The Arab world supports China regarding the pandemic, Xinjiang and Hong Kong, and is not going to participate in the Western anti-Chinese campaign. This can be concluded from the 9th ministerial meeting of the Sino-Arab Cooperation Forum held via video-conference on 6 July.

China and the Arab states established strategic partnership relations in 2018, at the previous 8th ministerial meeting. The current meeting demonstrates the parties have managed to strengthen strategic coordination and coherence. This is also true regarding the current joint struggle against the pandemic, as well as the implementation of major economic projects and the support for each other on political issues, particularly, on the situation in the Middle East. According to the Foreign Ministers of China, 21 Arab states, Arab League members, and the Arab League Secretary-General, all this has contributed to deepening the Sino-Arab strategic partnership.

The agreements reached during the meeting have opened up new opportunities to develop Sino-Arab relations in various fields, Zhou Rong, a political scientist from the Renmin University of China, noted.

"This is one of the meetings that unites the hearts of governments, medical workers in China and Arab states. Future cooperation between the parties will be even more mutually beneficial, covering joint projects in various fields. I believe that political relations between China and the Arab countries will constantly improve; the results of economic, cultural and scientific-technical cooperation will be impressive," he said.

“Although the Arab states are currently China’s largest source of crude oil imports, there is also Sino-Arab cooperation in the field of clean energy sources. Dreams of space exploration of many Arab countries are supported by Chinese technology; moreover, Arab countries’ population is very interested in learning Chinese. Sino-Arab trade and economic cooperation remain in place during the pandemic. For example, Ningbo successfully hosted an online export exhibition of Chinese goods for Saudi Arabia. Recently, Chinese and Egyptian musicians gave a live joint symphony concert on the 5G network. This is a kind of symbol of the two countries’ rapprochement. Currently, China and the Arab world are characterised not only by mutual political and economic support, as well as cultural interaction. The pandemic has shown the Arab world who is its most valuable friend. For its part, China has also found support from the Arab world on issues affecting its key interests.”

The Arab participants in the meeting supported China in protecting its sovereignty and territorial integrity. They supported China’s positions on Hong Kong and Xinjiang and opposed anyone’s interference in China’s internal affairs.

The summit was held in the context of the tough confrontation between the West and China, while discussions have shown that the Arab states are not part of this confrontation. Moreover, according to Muhammed Mazen, an Egyptian political scientist and expert on Arab-Chinese relations, Sino-Arab cooperation is only getting stronger:

"Sino-Arab relations are rooted in the far past. They continue evolving under various conditions and circumstances, proving their strength today. The prospects for developing these relations are still high. Even during the pandemic outbreak, the Arab states, unlike Western countries, didn’t try to blame China for everything. On the contrary, they offered help and cooperation. China did the same when the virus spread peaked in Arab countries. This says a lot about the parties’ mutual support, both political, economic and humanitarian. Therefore, even in recent months, one could notice how close China’s relations with the Arab world have become,” he said.

"As for the Silk Road project, its implementation hasn’t been affected in any way by the pandemic outbreak. Arab countries, primarily Egypt, are still part of the project. Other commercial projects carried out by Chinese companies in Egypt are also successfully developing. Despite the escalating tensions between China and the West, a new page has been opened in Sino-Arab cooperation, which is only strengthening. Moreover, the parties are actively establishing contacts in areas fundamentally new for joint cooperation, such as energy, space, and innovative technologies."

Arabs are pragmatically establishing commercial ties with China, protecting them from political contradictions, Maria Pakhomova from the Centre for Arab Studies at Institute of Oriental Studies of the Russian Academy of Sciences, said:

"The Arab world is quite careful in matters of China-West confrontation. The Arab states have opted for a careful policy. They recognize the absolute priority of security in international relations. Unlike the West, which has a destructive position, the Arab countries are aimed at cooperation."

It was important for China to gain the support of the Arab world in matters that are adding tension to its relations with the West. Of course, it got such diplomatic support, Maria Pakhomova believes. This is one of the main outcomes of the forum. The expert noted that China has met the expectations of the Arab participants in the meeting:

"This forum has been scheduled. It summarized the planned cooperation. Pandemic and human rights issues were on the agenda as current issues. The existence of such a mechanism of interaction with China as the Sino-Arab cooperation forum is important for Arab states. China is the leading player in the Middle East. It’s impossible to imagine the Arab states’ implementation of their regional and global policies without China’s participation and support.”

Mahmud Raya, editor-in-chief of the China in Arab Eyes portal, spoke about Lebanon’s role in China’s Middle East policy, as well as the importance of economic cooperation between the two countries for Lebanon’s revival:

"Lebanon can be called a window to the Middle East for Chinese companies. Having established strong economic ties with Beirut, Beijing will be able to move further, towards the Persian Gulf monarchies, to North Africa. But it’s easier and more profitable to start with the economically weak Lebanon, which needs a new investment flow and economic relations development. In Lebanon, Chinese companies are already establishing cooperation in various fields: energy, raw materials extraction, transport networks development, consumer goods industry. A large number of Lebanese ministries are taking part in negotiations with Chinese partners and investors. Meanwhile, going from negotiations to establishing cooperation is not easy. At this stage, we are going to face a large number of negotiations, approvals and consultations. Therefore, I think we’ll see real action and results from Lebanese-Chinese cooperation next year. But the first step has been taken – and this is already extremely important. I’d like to point out that the current Lebanese government is aimed at even stronger cooperation with China than with the EU or the United States. This can be easily explained: unlike Western states, China offers more favourable conditions, not trying to influence the republic’s domestic policy. Moreover, the Lebanese economy is now too dependent on IMF credit tranches and therefore on the United States. And this dependence should be eliminated,” he said.

Lebanon is one of many Arab countries that gets help from China to combat the pandemic. In general, China’s cooperation with the Arab world in the fight against the pandemic has strengthened the parties’ strategic cooperation, Zhou Rong believes:

"During the pandemic, China and the Arab world share grief and sorrows, fight side by side, demonstrate solidarity and mutual assistance. The two parties’ relations are entering their highest peak. In particular, during China’s most difficult times in fighting the epidemic, the Arab countries’ leaders expressed their strongest political support for China. After the pandemic outbreak in the Arab states, President Xi Jinping held telephone conversations or sent messages to the leaders of several Arab countries to express his willingness for mutual assistance and support, as well as joint overcoming difficulties. This has resulted, in particular, in health experts’ holding videoconferences with 21 Arab countries, and sending groups of Chinese doctors to 8 Arab states,” the expert pointed out.

© AFP 2020 / AIDAN JONES
This picture taken on February 8, 2020 shows a sign in Lao and Chinese referring to the construction of the first rail line linking China to Laos, a key part of Beijing's 'Belt and Road' project across the Mekong, in Luang Prabang.

“I’d like to point out China’s fundamental support for the Palestinian people’s just cause to restore their legitimate rights. At the same time, China provided the Palestinians with medical supplies to combat the pandemic, sent a group of medical specialists to Palestine, and provided funds to help Palestinian refugees. Regardless of the changing global situation, China and the Arab world have always been and remain good partners. Collaboration in fighting the pandemic has strengthened the strategic partnership between China and the Arab world. It’s also worth noting that the Arab states support China on issues of Hong Kong, Taiwan and Xinjiang. They are not influenced by the anti-Chinese campaign unleashed by the United States and other Western countries.”

At the forum, Chinese Foreign Minister Wang Yi noted that China and the Arab states had ramped up cooperation under the Belt and Road initiative; many key projects had been successfully launched. In 2019, bilateral trade increased by 9 percent year on year, the minister said. He suggested opening express channels to exchange necessary specialists and deepen cooperation on industrial value chains. Wang Yi also called on both to strive for high quality, sustainable development and improving the population’s material living conditions in the process of building the Belt and Road.