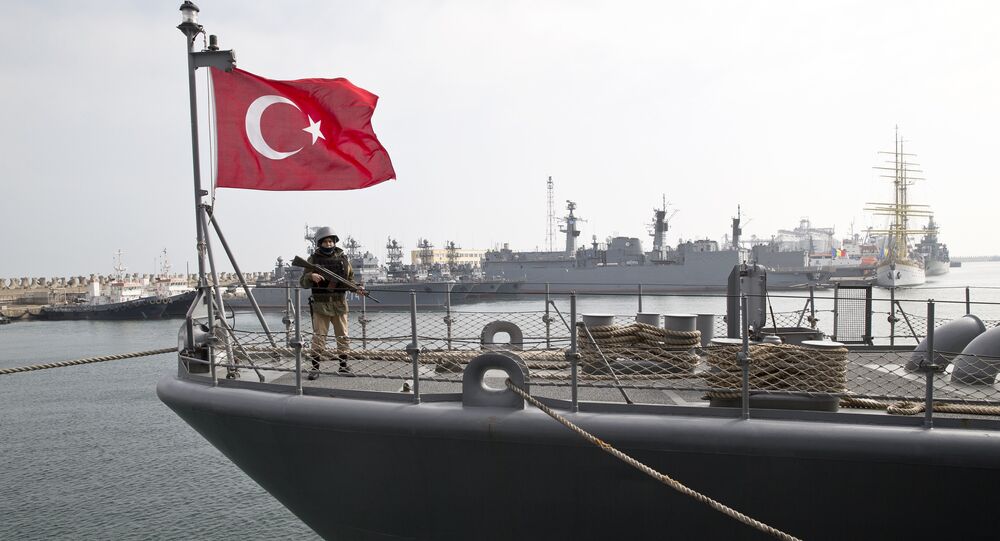 While Ankara has roused French anger over an incident involving a Tanzanian freighter traveling to Libya, Turkey risks far more politically by sticking to its guns over oil drilling near Cyprus, a political scientist told Sputnik on Wednesday.

Dr. Clarence Lusane, African-American author, activist, lecturer and former chair of the Political Science Department at Howard University, told Radio Sputnik’s Political Misfits that the incident in the Mediterranean Sea last week in which a Turkish ship escorting a Tanzanian-flagged freighter supposedly pointed its targeting radar at a French warship on an anti-arms smuggling patrol moving to intercept them was just a storm in a teacup.

“Turkey really is a ‘frenemy.’ Its location is very unique for Europe and for the Middle East,” he said, noting it “has a foot” in Europe but shares borders with Iran and Syria, as well as being close to Russia geographically.

“What it’s done is basically play off the West versus the East, meaning Russia versus the Middle East, against each other. France has been very frustrated, because it’s made pretty clear that Turkey has played a number of different sides and basically hasn’t been punished. It’s also frustrated, I think, with the role of the US, which also has been reluctant, particularly under Donald Trump, to do any criticisms of [Turkish President Recep Tayyip] Erdogan.”

“You could make an argument that Turkey, actually, is more important” than France to NATO “because of the geostrategic accident [of] where it happens to be and that Erdogan has been actually fairly sophisticated in keeping his alliances pretty broad,” Lusane told hosts Bob Schlehuber and Michelle Witte.

“One of the mistakes I think that happened in the past was that Turkey was not brought into the EU,” the academic explained. “Back 20 years ago, there was a push to bring Turkey in when the EU expanded in one of its expansions, but because of what I would consider racism on the part of Spain and Germany and a number of other countries in Europe, they pushed back. So what that did was essentially to give Turkey more latitude to be kind of its own player. And then as Erdogan has solidified his power, then he basically feels that he can kind of get away with a lot of different things.”

However, Lusane cautioned that NATO isn’t “on the verge of falling apart,” as Turkey is one of the oldest members of the alliance, dating back to the 1950s, when it was added due to its sharing a border with the Soviet Union at the time. Instead, he noted that France is having a “temper tantrum … in part because it can’t really get the UK or Germany or any of the other states to more aggressively target Turkey in what it considers to be Turkey’s breaking the norm. It did issue some demands, which may get support from other NATO members, specifically around Turkey adhering to some of the military guidelines that have been laid out. But that’s still kind of unfolding.”

“The other player in all of this is Russia,” Lusane said, noting Russian President Vladimir Putin “has considerable ties to Erdogan, from arms to political ties, and so that also kind of complicates the relationship. And again, the hidden player in all of this, at least in this current kind of round, is the United States. Donald Trump has basically skirted around US traditional allies in Western Europe and is cuddling up to Erdogan and Putin, and he’s on that side of the Mediterranean at this point.”

On Monday, Turkish Foreign Minister Mevlut Cavusoglu promised Ankara would respond to attempts by France and the European Union to punish it for oil drilling in waters off the coast of Cyprus it considers its own. “We will have to respond to this,” he said.

Just days prior, Cypriot President Nicos Anastasiades said the island nation “will be another Syria, another Libya, another Iraq” in the hands of Ankara, Greek City Times reported. Turkey has occupied the northern half of Cyprus since it invaded the island in 1974.

“Turkey may overplay its hand on this one, because that will bring in much more, I think, of a coalition from Germany and the US and the UK on this oil drilling,” Lusane said. “So that is still kind of an unfolding situation, but I don’t think Turkey has a lot of room to mess around with that.”

However, Lusane noted that sometimes Ankara gets held to a “double standard” compared to some of the whiter states of the European Union, which nonetheless engage in similar practices.

“The transgressions of Turkey kind of get a higher profile than when you look at some of the far-right forces, particularly in southern Europe, that basically got a pass for a long time, whether it was in Greece or it was in Spain or some of those other countries.”