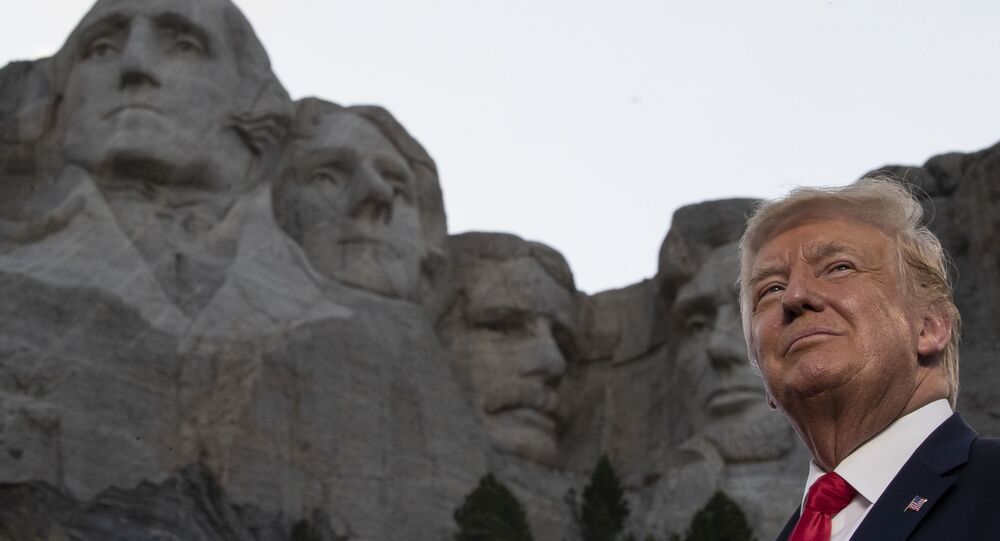 In a Friday speech at Mount Rushmore, US President Trump warned of “far-left fascism” while attacking the anti-racist progressive movement and setting the stage for a cultural war against Democrats, Jim Kavanagh, the editor of ThePolemicist.net, told Radio Sputnik’s Loud & Clear.

“Our nation is witnessing a merciless campaign to wipe out our history, defame our heroes, erase our values and indoctrinate our children,” Trump said, while warning that the nation’s history is at risk of destruction from “far-left fascists.”

“Angry mobs are trying to tear down statues of our founders, deface our most sacred memorials and unleash a wave of violent crime in our cities,” Trump added.

The term “far-left fascists” is just another one of Trump’s “favorite right-wing tropes,” Kavanagh told host John Kiriakou on Monday.

“Because the fascists in Germany - because [Nazi Party leader Adolf] Hitler called his party the National Socialist Party, therefore they’re socialists, and socialism is leftism, and leftism is fascism, and it’s all the same thing,” Kavanagh told Sputnik, explaining Trump’s train of thought.

“He’s playing on that, which has some currency among American right-wing thinkers, if that word can be used, and he’s also playing on the fact that there’s a determined campaign to insist on the truth about American history. And there’s a fight going on, which is a political fight and a fight over historical truths that people have different sides on,” Kavanagh added.

Trump’s visit comes as Native Americans and anti-racist activists turned their sights on the relief sculpture of four US presidents - Abraham Lincoln, Theodore Roosevelt, George Washington and Thomas Jefferson - carved into the side of a South Dakota mountain. However, the mountain is known to the Sioux tribe as the Six Grandfathers, a sacred site among the Black Hills, and members of the Lakota Sioux tribe have long decried the desecration of the granite monolith.

During his speech, Trump also accused protesters who are calling for the removal of statues depicting Confederates and other historical figures, such as Christopher Columbus and the four visages carved into Mount Rushmore, of wanting to “overthrow the American Revolution.”

“Make no mistake, this left-wing cultural revolution is designed to overthrow the American Revolution. In so doing, they would destroy the very civilization that rescued billions from poverty, disease, violence and hunger and that lifted humanity to new heights of achievement, discovery and progress. To make this possible, they are determined to tear down every statue, symbol and memory of our national heritage,” Trump claimed.

“Nobody should honor the Confederate generals,” Kavanagh explained.

“No one should honor Christopher Columbus. These are really nasty people, and history shows this, and we should have that discussion,” Kavanagh explained, noting that Trump appears to be trying to wage a cultural war to stir his base.

“What he’s trying to do is wrap all that up in a cultural offensive,” Kavanagh noted.

“It sounds very nasty and very weak, and it’s attacking people who don’t really have that much power, and everybody knows it. But it’s something that’s going to be an argument about what the values are, and this is setting the stage for cultural argument, for the election to be a cultural war. And the Democrats are going to love it, and they are going to come in and say, ‘We represent the good values of Thomas Jefferson and all presidents and our great founding fathers.’”

Trump also said during his speech that he is “deploying federal law enforcement to protect our monuments, arrest the rioters, and prosecute offenders to the fullest extent of the law,” after accusing protesters of tearing down historical heritage.

However, Trump is merely trying to “rile up his crowd” as he desperately tries to mobilize his base before the 2020 elections, Kavanagh explained.

In his “Salute to America” address on Saturday in Washington, DC, Trump used similar rhetoric and called for the defeat of “the radical left, the Marxists, the anarchists, the agitators, the looters and people who, in many instances, have absolutely no clue what they are doing.”

“He’s going to try to lump the Democrats in that far-left, anarchist, Marxist category, and it is just so crazy that from the point of view of the right wing in this country, you know, the Democratic Party and [2020 presidential candidate] Joe Biden campaign are part of the far left,” Kavanagh noted.

Despite Trump’s attempts to galvanize his base, he may be failing in this so-called cultural war. A Quinnipiac poll released earlier this month revealed that the majority of Americans (52%) support removing Confederate statues from public spaces. Meanwhile, a Washington Post-Schar School poll in June showed that 53% of Republicans supported the protests that arose after the police killing of Black man George Floyd in late May.