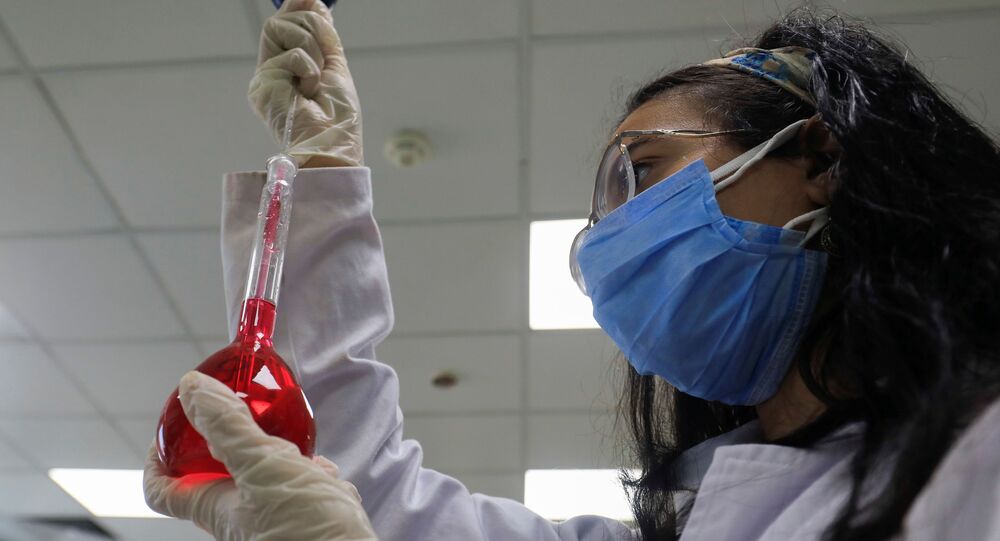 Remdesivir May Be Lifesaving for COVID-19 Patients, Yet Toxic for US-EU Relations

BRUSSELS (Sputnik), Luc Rivet - Remdesivir, an antiviral drug produced by the California-based company Gilead Sciences, has become the first treatment for COVID-19 to receive the backing of the European Medicines Agency and at the same time a bone of contention between the EU and the US after the latter allegedly bought up its global supply.

Stefan de Keersmaecker, a spokesman for the European Commission, said earlier on Thursday that the EU was negotiating with Gilead Sciences the possibility of providing the bloc with a sufficient number of doses of the drug amid reports that the US intends to stockpile it.

Media outlets earlier this week reported that the United States had purchased nearly all of Remdesivir's reserves for the next three months from the biopharmaceutical firm, thus, significantly limiting European countries' access to the drug. While the first 140,000 doses of the drug were sold worldwide, in late June, Washington purchased about 500,000 doses, which is about 90 percent of the drug's three-month supply.

Meanwhile, Daniel O'Day, the CEO of Gilead Sciences, assured in an open letter published on Monday that Remdesivir would be affordable and available in all countries.

"To ensure broad and equitable access at a time of urgent global need, we have set a price for governments of developed countries of $390 per vial… The 5-day treatment course using 6 vials of Remdesivir, equates to $2,340 per patient. Part of the intent behind our decision was to remove the need for the country by country negotiations on price", the letter read.

However, when contacted by a Sputnik correspondent, Gilead's press service refused to comment on either the supply priority or on its global lobbying policy. Yet, it confirmed that developing countries such as India and Egypt would be offered Remdesivir at a reduced price until a vaccine was made available.

Washington's announcement of acquiring 92 percent of all production of Remdesivir has raised fears of a shortage of the drug in the rest of the world, and the European media began slamming the US attitude as unacceptable.

Many EU news outlets referred to the French pharmaceutical giant Sanofi, whose president has said that the US government would get priority for a new vaccine in development because it had invested in the research.

Over the past few days, however, several European countries, including Germany, Spain, and the United Kingdom, said they had enough Remdesivir in stock to treat all patients.

"The [German] federal government secured early stocks of Remdesivir. Right now there are enough reserves to use on patients in hospitals for the coming months", a spokesperson for the German Health Ministry told Sputnik.

In addition, the Gilead laboratory has granted free licenses to nine manufacturers of generic drugs in India, Pakistan, and Egypt.

Every Man for Himself

In the meantime, according to Jean Macq, a professor of Public Health at the Institute for Health and Society Research of the UCLouvain university in Belgium, the novel coronavirus pandemic has led to the disappearance of multilateral cooperation.

"The COVID-19 pandemic clearly highlights the return to a national approach to health and the disappearance of multilateral collaboration. WHO [the World Health Organisation] is having great difficulty in making its voice heard, despite good management of the pandemic, after some hesitation at the start", Macq, who also works at the WHO, told Sputnik.

© REUTERS / YVES HERMAN
A pharmacist displays an ampoule of Dexamethasone at the Erasme Hospital amid the coronavirus disease (COVID-19) outbreak, in Brussels, Belgium, June 16, 2020.

According to the professor, the controversy over Remdesivir shows that in today's world it's every man is for himself.

"This can be explained by the urgency at the heart of Europe but also by the evolution of geopolitics between the US, China, Russia, and the EU. We have seen that the European Union has not been able to respond quickly to the spread of the epidemic and that even today, for vaccine orders, member countries congregate in small groups, without thinking of a group order which would be carried out by the European Commission", Macq noted.

He added that when the COVID-19 vaccines are presented to the world, there will be "another big tussle between developed countries. The quarrel will start again about priorities".

Remdesivir Not a Panacea, Pandemic on the Rise

According to the WHO, the coronavirus pandemic is on the rise in several parts of the world. The epidemiological situation has somewhat stabilised in Europe but is still deteriorating in the United States and in Latin America. Several African and Asian countries have also seen the epidemic flare up.

According to preliminary findings, the use of Remdesivir alone for COVID-19 patients is not sufficient.

"Remdesivir is one of the few drugs on the shelf available to slightly improve the situation in hospitals, but I am very worried now about deconfinement and the reopening of borders within Europe and with third countries... Of course, the US or Brazil flights are still not allowed in, but Europeans will travel because summer is there and holidays are sacred".

© REUTERS / Brian Snyder
Nurses, doctors and hospital workers take part in a vigil at Brigham and Women’s Hospital, where many coronavirus disease (COVID-19) patients have been treated, against the death in Minneapolis police custody of George Floyd, in Boston, Massachusetts, U.S., June 5, 2020

"I understand the positive decision for countries that live off tourism, but it could mean many new small clusters will appear when the criss-crossing diminishes in the fall", virologist Marc Van Ranst of KU Leuven University in Belgium, told Sputnik.

The COVID-19 outbreak was declared a pandemic by the WHO in early spring. To date, more than 10.7 million people have been infected with the coronavirus worldwide and over 517,000 of them have died.