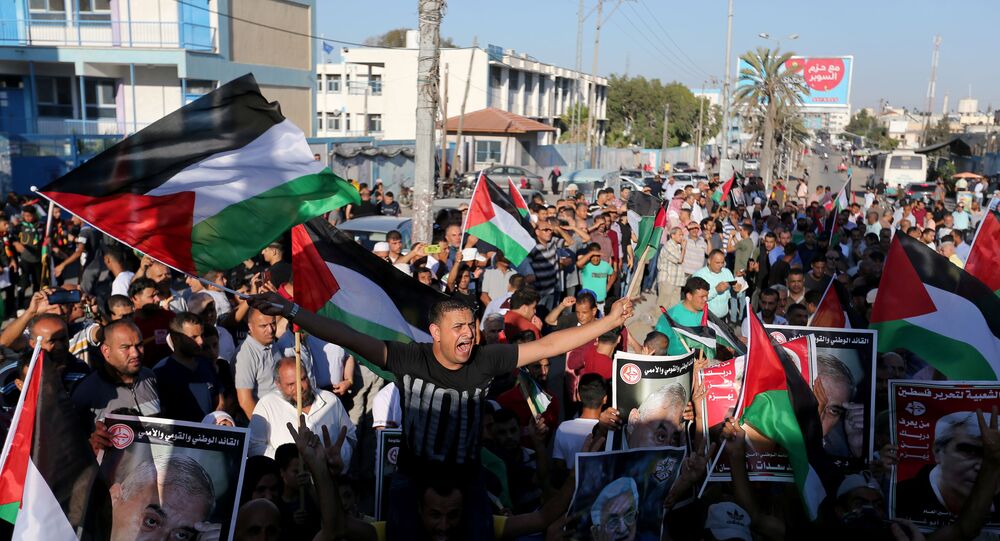 Some Palestinian groups might be united in their desire to block Israel's sovereignty plans, but they've failed to gain the support of every Arab nation. While Jordan appears to back the PA, neighbouring Egypt has been ambivalent, trying to balance between its willingness to please the Palestinians and the need to maintain good ties with Tel Aviv.

Although the highly-anticipated sovereignty plan never reached the desks of Israeli parliamentarians on Wednesday, Benjamin Netanyahu's office has released a statement saying that the prime minister will continue to "hold talks with the Americans" to deliver what he'd promised to his voters, namely the chopping off of parts of the West Bank.

Negotiations with representatives of US President Donald Trump are expected to take place in the coming days, with Netanyahu counting on getting Washington's approval to include clusters of Jewish settlements around Jerusalem, as well as a couple of towns located deep inside Palestinian territories in his sovereignty plan.

Knowing that Netanyahu has no intention of backtracking, top officials from Fatah and Hamas decided to put their differences aside, making an unprecedented joint statement on Thursday and calling on all Palestinian factions to work together "for the establishment of an independent state".

"We don't have any other enemy but Israel", Fatah's Jibril Rajoub and Hamas' Saleh Al Arouri said in a statement via Zoom. "Do not underestimate our determination and our objection to the annexation plan", they added.

So far, however, they have failed to mobilise the masses to confront Israel's security forces. Although thousands took to the streets of Gaza on Wednesday calling on Israel to "take its hands off" Palestinian lands and small demonstrations were scattered across the West Bank, clashes haven't been registered, not only because the raging coronavirus kept many people indoors, but also because many were frustrated with their own government and its inability to tackle the intention to bite off parts of the West Bank.

Neither did they manage to get the support of some countries in the Arab world. Speaking on condition of anonymity, a Saudi official said that although Netanyahu's annexation plan would be considered a "major setback", he acknowledged the importance of the area to the Jewish people.

"I understand that Judea and Samaria [Hebrew for the West Bank – ed.] are the heart of the nation of Israel given their history and its religious importance for the Jews", he said, stressing that he could fathom why Netanyahu was determined to go ahead with the plan.

"At the same time, politics is the art of what's possible, so you have to give and take", he added.

Neighbouring Egypt has also been ambivalent about the Israeli PM's initiative.

Over the years, Egypt has been supportive of the Palestinian cause, with President Abdel Fattah al-Sisi vowing to reject any initiative that would not fit people in Gaza and the West Bank, but Cairo's security problems coupled with a number of financial challenges has pushed the Palestinian issue to the sidelines.

© REUTERS / Mohamad Torokman
Mixed Feelings, Riots and Demonstrations: Palestinians Brace for Netanyahu's West Bank Plan
A good example of this was in June, when Egyptian Foreign Minister Sameh Shoukry was supposed to join his Jordanian counterpart on a trip to Ramallah to meet Palestinian President Mahmoud Abbas and discuss measures to be taken to prevent Netanyahu's expansion plans.

Shoukry never showed up, citing pressing obligations, a move that sent a clear message to many in the West Bank that Egypt's interests were elsewhere.

But Mounir Mahmoud, a Cairo-based expert, who specialises on Israeli-Egyptian relations, refuses to believe that his country would turn a blind eye to the Jewish state's actions against the Palestinians.

"Any unilateral steps that breach the current status quo will not be accepted by the Egyptian leadership. Nor will they be backed by the general public that cares about the rights of the Palestinians and wants to see the establishment of their independent state alongside Israel".

Despite its general hostility to the Jewish state, a recent poll conducted in Egypt showed that the majority of the Egyptian public wanted their country, as well as other Arab states, to play a pivotal role in Israeli-Palestinian peace talks, offering both sides various incentives to take more moderate positions.

This is why Israel's "annexation" plans, which are largely regarded as an extreme measure that would deprive the Palestinians of their rights, didn't sit well with the Egyptian public. Mahmoud says Cairo will "stand firm" on its objection to the move, even if the Netanyahu government pushes for smaller land grabs than previously planned.

"The various scenarios that the Israeli media is throwing around are no more than bait aimed at gauging the Arab world's opinion on the upcoming move. It doesn't matter whether the annexation is going to be full or partial, I strongly believe that the Egyptians will not change their minds on the matter, staying by the side of the Palestinians".

Jordan to the Rescue

Similar views have also been heard in Jordan, whose leadership has already warned Israel of dire repercussions if the Jewish state presses ahead with its intention to bite off what they consider Palestinian lands.

King Abdullah II earlier passed on a message to Netanyahu saying that he would not sit idly by if Israel realised its plans, whether fully or partially, echoing his previous warnings that Jordan might reconsider its historic 1994 peace treaty with Israel.

"Jordanians see Israel's annexation as a national disaster that threatens the Hashemite Kingdom no less than it does the Palestinians", said Qeis Khalil Ziyadin, a member of the Jordanian parliament, referring to waves of violence and instability that such a move might entail.

Moreover, Zayadin believes the Jordanian leadership knows that by accepting the annexation "of even an inch of the West Bank", it will set a precedent, sending a message to Tel Aviv that the "occupation of Palestinian lands" is permissible and that the international community is powerless in the face of "Israel's re-occupation of Palestinian lands".

"Jordanians are especially frustrated at the ability of Israel to break all UN resolutions and [go against] international law, paying no price for their actions. They are also frustrated at how countries issue statements of condemnation but don't take any further action to stop Tel Aviv", he summed up, suggesting that his government will not be part of that club.

Despite increasing pressure, Netanyahu is sticking to his decision to extend Israeli sovereignty and although it's unclear just how much of his initial West Bank land grab will come true, he says it is a definite must not only because of security but also for religious reasons.