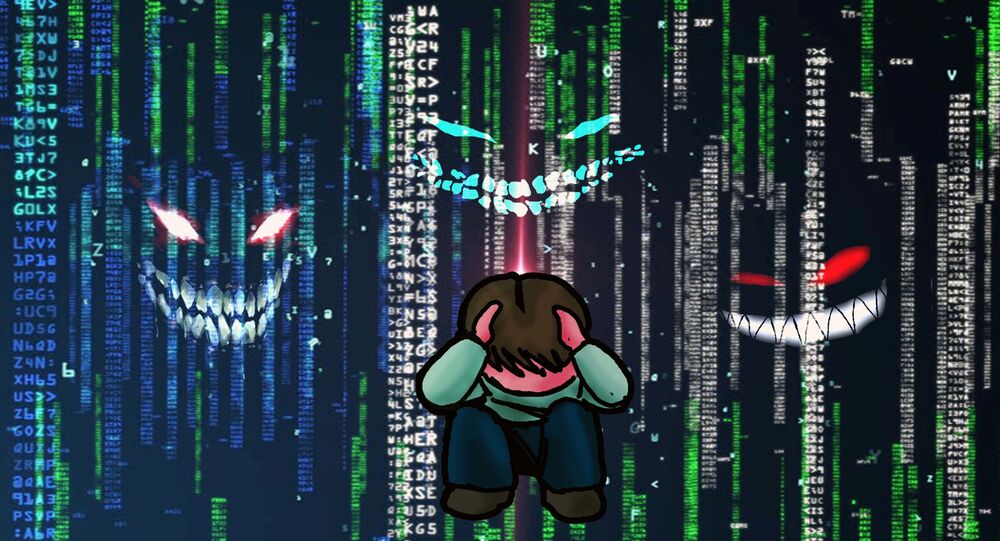 The anonymity provided by the internet and social media may be a reason why some online bullying occurs, according to a co-author of a study showing that a little under a third of young people who bullied others online also show symptoms of post-traumatic stress disorder.

Bullies, victims of cyberbullying and those who are both, all show signs of post-traumatic stress disorder (PTSD) in a new peer-reviewed observational study published in the British Medical Journal. Clinical psychologist Dr Ana Pascual-Sánchez co-authored the study which is based on survey results from 1,516 students, aged between 11 and 19, in four separate London-based schools. She explained the significance of the findings as well as why more study must be done on the subject.

Sputnik: How did you define bullying and PTSD for this study?

Dr Ana Pascual-Sánchez: Bullying has been defined as an aggressive and intentional act, using electronic forms of contact (cyberbullying), or face-to-face (traditional bullying), repeatedly and over time against a victim who cannot easily defend him or herself. Regarding post-traumatic stress symptoms, they are define as the existence of symptoms such as intrusion (e.g. intrusive memories related to the event(s)) or avoidance  (e.g. avoiding situations related to the traumatic situation), that cause distress and/or impairment, and that are associated with a situation that is experienced as traumatic for the person, where she or he felt vulnerable in some way.

Sputnik: How serious is the PTSD experienced by children who suffer from cyberbullying compared to its face to face version?

Dr Ana Pascual-Sánchez: In the present study, traditional victimisation appeared to better predict PTSD symptoms than cybervictimisation, although both of them play a role in predicting PTSD symptoms. Each teenager presenting PTSD symptoms should be assessed by asking what experiences triggered these symptoms to address how they perceived it (e.g. others around when experiencing traditional bullying, or repetitive and difficult to avoid bullying when received by online means), and what the symptoms are that the person is experiencing, their intensity and their impact.

Sputnik: Your study concluded that "more than a third of the cyberbullies were not involved in traditional bullying". That's quite significant, suggesting that there's something about the internet and social media that facilitates bullying that otherwise would not occur face to face. What conclusions have you drawn about these results?

Dr Ana Pascual-Sánchez: This is something that was previously suggested by other authors and that our results highlight. It seems as if the anonymity provided by online means could increase the risk of bullying perpetration, providing a platform that is easy to access and that can reach others quickly and easily. This has potential implications since cyberbullying can be more difficult to control and can reach more people, so this area deserves further study.

Sputnik: Were students who had experienced bullying more likely to engage in bullying?

Dr Ana Pascual-Sánchez: Yes, actually the combined group called bully-victims would be a result of how a teenager could be both a victim and a perpetrator. Previous research suggested that being a victim is associated with higher risk for becoming a perpetrator.

Sputnik: Your study says 29% of the Cyberbullies showed symptoms of "clinically significant" PTSD. Why would perpetrators of cyberbullying experience PTSD?

Dr Ana Pascual-Sánchez: Our findings suggested that perpetrators also suffer PTSD symptoms, which could be explained by how perpetrating aggression also expose bullies to potential violent situations in which they can lose control and even feel vulnerable or regret from it. However, despite these options being potential explanations, further research is needed to get a more comprehensive answer.

Sputnik: What can be done to mitigate against cyberbullying whilst still protecting freedom of speech online?

Dr Ana Pascual-Sánchez: This is a good question. I would suggest that a balance between freedom and protection should be encouraged, which is not that easy in practice. Several factors are involved and different actions are encouraged: from the teenagers themselves (e.g. encourage coping strategies, promote assertiveness, encourage asking for help) to schools or parents (from modelling healthy ways to managing relationships and difficulties).

Sputnik: Describe any other recommendations you have now.

Dr Ana Pascual-Sánchez: Our findings suggested that not only more common symptoms such as anxiety or depression are relevant in adolescents involved in bullying in some way. Most of the attention tends to be focused on aggressive behaviours or emotional symptoms such as sadness, because they are more noticeable and tend to cause more disruption. However, our results suggest the relevance of also being aware of PTSD symptoms which can have potential implications in daily life (trouble concentrating associated with symptoms of intrusion, avoidance of school or spaces of enjoyment with classmates for the risk of being bullied, and so on). Sometimes it is not easy to find something you are not looking for.