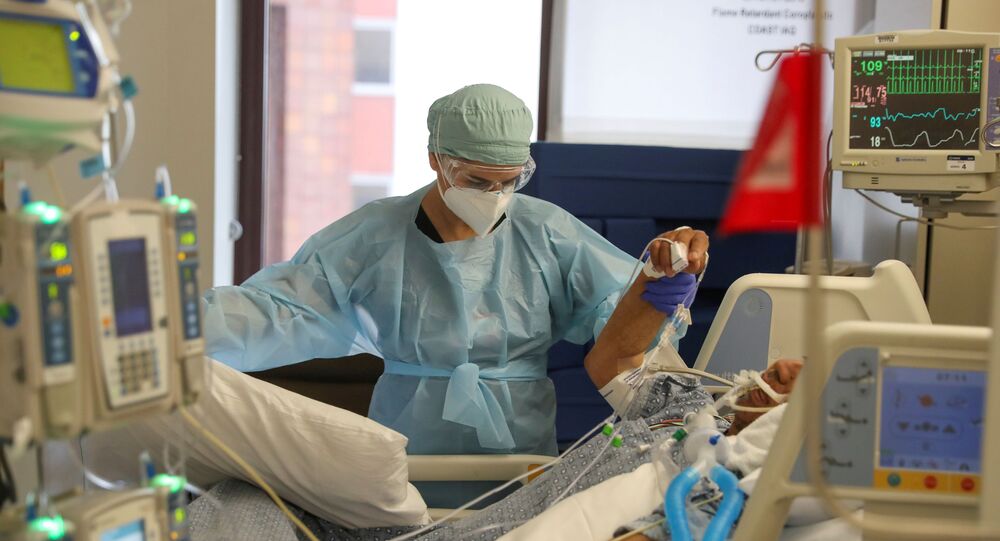 US COVID-19 Public Health Practices Being Debated in Political, Not Scientific Field - Researcher

As COVID-19 spreads rapidly across several US states including Florida, Texas, Arizona and California, the US government also continues to politicize the public health issue, Dr. Jason Kindrachuk, an assistant professor of viral pathogenesis at the University of Manitoba and Canada Research Chair in molecular pathogenesis, told Sputnik Monday.

“History books are going to have a multitude of things to talk about down the line of what went wrong and when did it go wrong. I think what we’re seeing is realistically all the kind of small mistakes that happened initially in the response now combining into basically just a cataclysmic explosion of problems that have been underlying underneath the surface and are now resurfacing,”  Kindrachuk told Loud & Clear host John Kiriakou.

“What we saw was obviously, I think, a politicization, as well, of the pandemic, and that’s where I look at our country as compared to the US and that’s where I see that there has been such a gross difference between the two locations … I think Canadians have accepted - outside of a very, very small minority - that this is a national issue that we all have to contribute to. That doesn’t seem to be the case down south,” Kindrachuk explained.

“I think that the unfortunate side is we’re seeing a lot of that play out in the decisions that are being made and also how messaging is being pushed out to folks in your country,” Kindrachuk added.

Masks have become a passionate topic of debate in the US, which the US Centers for Disease Control (CDC) has recommended wearing in order to stem the spread of the respiratory disease, even as some claim that being forced to wear a mask threatens their civil liberties. However, numerous studies have shown that masks may be effective at preventing infection. A meta-analysis of 172 studies published on June 1 in the Lancet Journal found that mask wearing “could result in a large reduction in risk of infection.”

In Canada, those who can’t follow social distancing guidelines are advised to wear masks.

“We have a recommendation that’s based on folks that can’t adhere to social distancing or those that are in situations where they can’t keep six feet apart. But we haven’t seen a heavy debate on it [in Canada] ... I think people are just going with what the recommendations are,” Kindrachuk noted.

“We saw some initial debate about the usefulness of masks and I think that’s where you’re seeing some of the more virulent posts on social media that are coming up ... the science has progressed. We’ve learned a decade’s worth of information about the virus in six months, we know have a much better idea of how this virus differs from other respiratory viruses that we’ve seen and we do know that presymptomatic infection, that period when people are infected but they are not yet showing symptoms, we know that there is transmission that can be occurring,” Kindarachuk said.

“So, now we get into the identification, the fact that masks actually can play a part in reducing transmission. You have many regions of the US that have heavy population density … masks are generally going to be able to help, especially when we’re looking at this idea of going through phased reopening of the economy and different businesses and things like schools and different outdoor events. Masks are now going to become much more important,” Kindrachuk pointed out.

“A lot of what we’re seeing with the pushback on masks is partly due to the politicization of this pandemic. But we are also seeing a weird integration of different kinds of pseudoscience communities that are coming together,” Kindrachuk said.

Kindrachuk also noted that there is still much about the virus’ behavior that scientists don’t know. In fact, there may not even be a second wave of the virus. ”This could potentially just be one long, kind of slow-burning wave,” he said.

In recent weeks, some scientists have suggested the SARS-CoV-2 virus, which causes COVID-19, has mutated such that it can more easily infect human cells. Researchers at the Scripps Research Institute released a study on June 12 that has not yet been peer-reviewed. According to the study, the so-called D-614G mutation affects the spike protein, which is a structure on the exterior of SARS-CoV-2, which is used to infect cells.

“There’s a specific mutation that is found in what we call the spike protein. It’s basically an antenna that sits on the surface of the virus and it looks for a corresponding antenna on our cells when we get infected. What we see with other viruses, and definitely with influenza viruses, is that there could be mutations in that antenna. Basically it changes the configuration of the antenna a little bit … There’s been this one mutation, this D-614G that we’ve seen cropping up,” Kindrachuk explained.

Although there is some evidence that the mutation causes the novel coronavirus to better bind to host cells than other variants of the virus in isolated systems, more research needs to be done to determine whether the mutation is definitely more virulent than other strains.

“Let’s not get ahead of ourselves,” Kindrachuk advised.