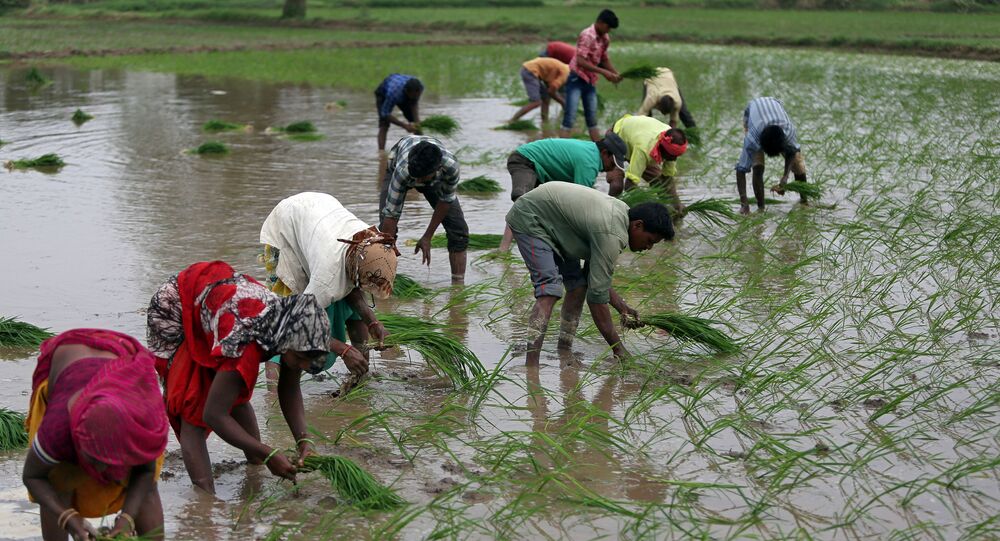 New Delhi (Sputnik): Most of India is predominantly rural, with about half of the national economy and over two thirds of total employment generated in rural areas. According to a paper prepared by federal think-tank Niti Ayog, not including farming, rural areas contribute about half of the manufacturing output of the entire country.

Experts feel that India should decentralise economic activities, with rural hubs in the forefront of the manufacturing process so that the flight of the workforce from rural areas to urban centres is curtailed. One of the reasons cited by Niti Ayog for this migration from rural to urban centres is the low level of income and wide disparity in worker productivity in rural areas.

This transition to urbanization over the years is leading to a decline in the rural share of the population, workforce and GDP of the country.  Over fifty percent of the increase in urban population during 2001-2011 (the years of last two population counts) has been attributed to the rural-urban migration and re-classification of rural settlements into urban, noted Niti Ayog.

Viswas Tripathi, chairman of the BRICS Chamber of Commerce and Industry said that India needs to go back to the Gandhian model of development if it wants to become self-reliant. After the global economic disruption following outbreak of COVID-19, he asserts, India should look inwardly.

“Unless people are confined to their places where they have their livelihood, the migration to urban centres won’t stop. Micro, Small and Medium industry should go for mechanisation and the labour force should be involved in village-based economic development or Gandhian model of economic development to make the villages self-reliant,” Tripathi suggested.

After India announced a national lockdown on 24 March, millions of migrant labourers lost earnings and wages, subsequently returning from urban economic centres to their villages on foot. While India’s federal government lifted the lockdown conditionally from 1 June, labourers remained in villages fearing for their lives due to the highly-infectious COVID-19 pandemic.

Tripathi told Sputnik that, once the situation normalises, at least 60 percent of the labour force would return to the urban centres, but the rest may stay back, although he acknowledged that there is no data to back his assessment.

“Already the industry is facing the problem of lack of labour force. A couple of industrial houses have expressed their apprehension to me. We must understand, these people came out of villages because of lack of employment opportunities there. Some of them might continue to stay back, as the situation becomes normal,” Mahajan told Sputnik News.

Tripathi suggested the development of smart towns and smart villages as way to gain a more holistic development in rural areas of India.

“I feel the government has taken a decision in the right direction to provide funds to MSMEs in the stimulus package announced by Prime Minister Narendra Modi, but there is need to implement it in the same spirit. We have to galvanise government machinery down the line and the state governments towards a holistic development of the rural areas,” he suggested.

Swadeshi Jagaran Manch has been strongly advocating self-reliance in all sectors and has had contrary views on several policies taken by the Modi government, including disinvestment in profit-making companies, unhindered entry of e-commerce giants and a new trade pact with China.

Mahajan suggested a two-pronged approach. First, provide meaningful and remunerative employment to these workers in urban centres, and second, generate more employment opportunities in the villages.

“We should start more and more economic activities in the rural areas like farm and non-farm activities, value addition to farm produce, food processing which are more employment oriented. We should also think of change in crop pattern with more of pulses and oilseed productions, which would give more jobs,” he told Sputnik.

Mahajan advocated BJP ideologue Deen Dayal Upadhyay’s doctrine of integral humanism, with the person at the core of every social, political and economic model. He said, because of the obsession for globalisation, the idea of trickledown effect has not worked, the welfare of people has not improved.

“If employments are available in rural areas, income start flowing to rural population and the rural economy would naturally improve. As of now there is a huge gap of income in rural and urban areas. I find from data that the difference between the rural and urban income is 1:12.3,” said Mahajan.

Mahajan said the government’s focus should not only be improving the gross domestic product (GDP) but also the actual physical and financial welfare of people. “If the income is more evenly distributed, that would be a win-win situation for all,” he noted.

Both Tripathi and Mahajan agree that a normalisation of economic activities or a pre-lockdown prediction could not be made, as it depends on too many factors, including the global situation.

“COVID-19 has taught us a lesson and we are now looking at self-reliance. We can do it, look at how we manufactured PPE, ventilators, testing kits, etc. Even the government is talking in terms of self-reliance, not to reduce imports, but instead export our products. The delay in normalisation in other parts of the world would give strength to our domestic capacity,” said Mahajan.

“I don’t know how we will be able to manage between WTO and the current COVID situation, because it is force majeure. It is survival first, if we encourage consumption of domestic products,” offered Tripathi.