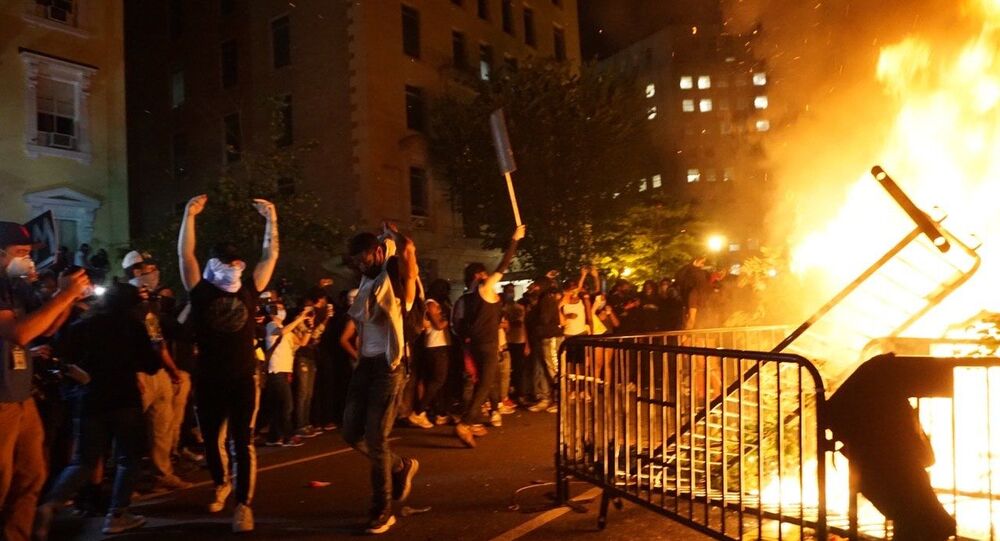 Moment of Truth? How BLM Leader's Words at Once Exposed True Aims & Utter Hypocrisy of the Movement

On 24 June, leader of the Greater New York Black Lives Matter Hawk Newsome stated that if the movement sparked by the killing of George Floyd does not bring about tangible results the protesters will change the system forcibly. According to US observers, Newsome's remark is unsurprising and speaks volumes about BLM's true goals.

"If this country doesn’t give us what we want, then we will burn down this system and replace it. All right? And I could be speaking figuratively. I could be speaking literally. It’s a matter of interpretation", Hawk Newsome told Fox News "The Story" on Wednesday evening.

Newsome's comments prompted a backlash from President Donald Trump who called them "treason, sedition, and insurrection".

Black Lives Matter leader states, "If U.S. doesn’t give us what we want, then we will burn down this system and replace it". This is Treason, Sedition, Insurrection!

​'BLM's Aims Were Not Peaceful From the Start'

During the interview with "The Story" host Martha MacCallum, Newsome argued that only "when people get aggressive and they escalate their protests" change happens in the US: "cops get fired, Republican politicians talking about police reform".

"Let’s observe the history of the 1960s, when black people were rioting. We had the highest growth in wealth, in property ownership. Think about the last few weeks since we started protesting. There have been eight cops fired across the country", the Black Lives Matter leader said insisting that the US "is built upon violence" and that it would be "hypocritical" to accuse the movement of being violent.

"If this country doesn't give us what we want, then we will burn down this system and replace it." - Hawk Newsome, BLM Leader

​The acknowledgement by the senior member of the Black Lives Matter movement that one of the organisation's intentions is to "burn down" the American political system "represents a rare and probably unintentional moment of honesty", opines Paul Valone, a political commentator and executive director of Rights Watch International.

"BLM was founded by three hard-left radicals with ties to an equally radical group calling itself 'Liberation Road'", the political commentator says. "As such, their intent from the beginning has not been merely to address what they claim is 'systemic racism', but to tear down America’s constitutional republic and replace it with a socialist autocracy".

Valone suggests that "the stated 'peaceful intentions' of protests around the US are belied by repeated looting, arson, and desecration of national monuments, all of which demonstrate an intent to break down the rule of law in America".

"Violent protests are not lawful anywhere in the United States", echoes Wall Street analyst and investigative journalist Charles Ortel, stressing that disturbances, looting, and vandalism clearly contradict the US Constitution which protects the right to protest peacefully under the First Amendment.

The analyst expressed his growing concerns over the true aims of the Black Lives Matter leaders and fundraisers, especially given that they include "destroying the American system to impose a new one whose contours are yet to be explained".

Ortel shares Valone's stance that the Black Lives Matter movement has a clear left-wing bias with at least two of its founders being "trained Marxists" by their own account.

​He deems that there is no coincidence that one of the co-directors of Thousand Currents, a charity that raises money for the Black Lives Matter Global Network Foundation, is Susan Rosenberg, the former member of the left-wing radical organisation Weather Underground (WUO). She was sentenced to 58 years in prison on weapons and explosives charges in 1985 and pardoned by President Bill Clinton in 2001. Ortel remarks that after this information emerged on Twitter a few days ago Thousand Currents disabled the "board of directors" webpage that contained Rosenberg's photo and bio.

Besides this, the investigative journalist raises the question as to how the Black Lives Matter movement is spending its millions in donations, arguing that BLM Global Network's fiscal sponsors do not provide any details about where the money goes.

According to Ortel, officials at the FBI, Justice Department, and IRS must act now and subject to scrutiny both the BLM Global Network and its numerous agents like ActBlue and Thosand Currents, or GoFundMe accounts.

'The Posture of BLM is Entirely Subversive'

While their intentions are obviously not peaceful "and its putative model is the Bolshevik seizure of power in 1917", in reality the BLM leadership is bourgeois to the core and their rhetoric is "nothing but posturing".

"BLM has every interest in preserving the state and society it claims to despise, because its true purpose is to latch onto that society’s considerable wealth and benefits, merely from a better position that it does now", Coleman emphasises.

Meanwhile, "the young white radicals that make up the main body of BLM street agitators lap up this agitprop gratefully", he notes, as "it makes them feel revolutionary and virtuous as they turn up the XM Radios in their BMW’s for the trip back to the suburbs".