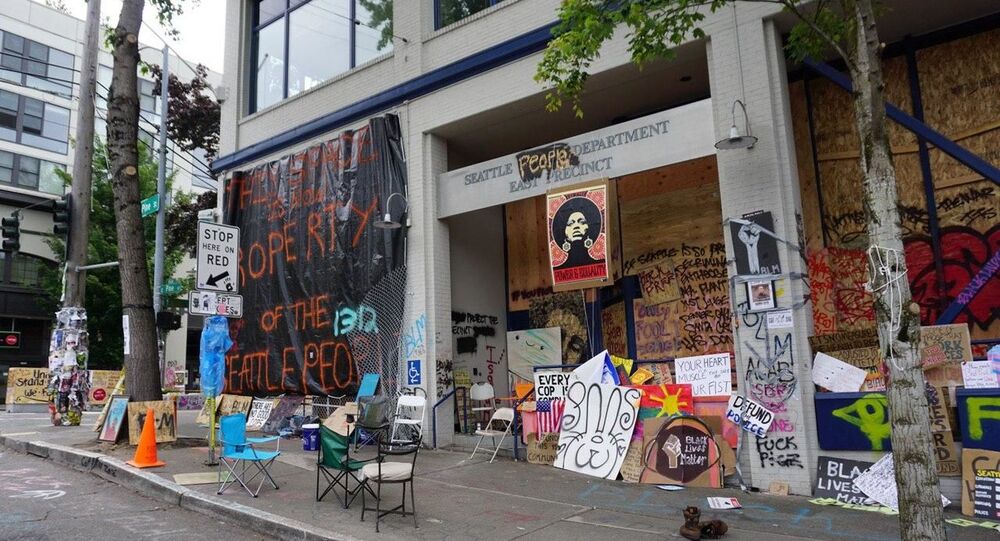 As CHAZ Residents Praise It as 'Heaven', Pundit Says No-Police Zone Might Not Be so Idyllic

The autonomous zone's residents claim that they can regulate the community without the presence of law enforcement, but some CHAZ leaders say some people are already leaving the area, having become discontent with the situation there.

The so-called "Capitol Hill Autonomous Zone" or CHAZ has been in place for weeks now and despite its leaders claiming to be able to control the situation, two shootings have already taken place on its territory, with residents not allowing police to intervene or investigate.

The CHAZ activists, protesters against police brutality and advocates of the Black Lives Matter movement, highlight the unique atmosphere and intra-community relations of the zone, where residents often gather to protest, watch documentaries or simply dance right on the streets during the night. One of the protesters, who named himself "Officer Chaz", describes the place as "heaven" enjoyed by both residents and local shopkeepers, whose kiosks gave been covered in graffiti over the last few weeks.

"We are a peaceful and fun-loving community of mostly quasi-anarchists and actual anarchists, with a heavy emphasis on social programs, activism, and sharing but more importantly, caring. […] Our goal is to build a thriving co-operative community without police, where the citizens' demands are provided for based on need, not greed—people over profits", Officer Chaz says.

Shauna Sowersby, a Seattle-based freelance reporter and photographer who has spent some time inside the CHAZ, describes the situation there as calm, with residents gathering for various "positive community activities" such as "teach-ins", documentary viewings and musicians' performances.

"The last few days have felt like a block party almost and it has been much more peaceful since the police left the area. There have been a couple of instigators, for example, someone throwing a lit match on some fuel next to the precinct yesterday. But other demonstrators are quick to accost people like that", Sowersby shares.

Not Such a 'Heaven' After All?

However, not every resident has apparently found this atmosphere to be so idyllic, and some have chosen to leave the no-police zone instead. One of the leaders of the protesters, hip-hop artist Raz Simone, revealed the dwindling numbers of CHAZ residents and suggested that the "project is now concluded".

A false assumption was made with the creation of the CHAZ that all of its residents had actually consented to be "policed" by the protesters behind it, Dr. William Sousa, Professor in the Department of Criminal Justice at the University of Nevada, Las Vegas, indicates.

"We know from years of research that while people believe police can (and should) improve their services and relationships with citizens […]. That all citizens living and working in a neighborhood would simply reject public police and welcome the authority of the autonomous zone is a flawed assumption and certainly not supported by any evidence or research", Sousa says.

The pundit brings up several reasons why the CHAZ's self-policing is flawed and may force residents to not accept it. He stresses that untrained and unsupervised citizens in charge of maintaining order are a "recipe for trouble". Sousa also indicated that the fact that CHAZ citizen patrols were never a part of the police doesn't mean they are incapable of misconduct. On the contrary – they might turn out to be a bigger problem than the police the protesters drove away.

"With no government authority over citizen patrols, little prevents them from extorting residents and local businesses for 'protection money' or from turning to vigilante justice. If people think that controlling the conduct of public police is difficult, they should realize that controlling vigilantism would be an even greater problem", the professor said.

The Future and Legacy of CHAZ

With the statements of Raz Simone about the end of the CHAZ "project" comes the question about what future awaits the zone and what legacy it will leave. Reporter Sowersby describes the CHAZ community as incredibly organized and capable of sustaining itself. Officer Chaz, in turn, insists that the no-police zone is actively moving towards "self-sustainability" in which it will no longer need "donations from the outside world".

"Whatever happens in the future, CHAZ is here to stay", Officer Chaz believes.

The reporter, however, is more sceptical. She said that there are "mixed feelings about the situation" in the CHAZ among its residents and suggested that city authorities will not let the precinct "go so easily". Mayor of Seattle Jenny Durkan already announced plans to reclaim the city district, citing difficulties created by the CHAZ to both "businesses and residents".

While the CHAZ's fate remains unclear, it is likely to leave its trace on US society. Dr Sousa indicates that by allowing such autonomous zones to emerge, the authorities have undermined the "legitimacy of public police" in the eyes of residents. He stresses that it's crucial for the police to keep that legitimacy if they are to manage "problems in neighbourhoods" – prevent victimizations, crimes and disorder – something that CHAZ citizen patrols have apparently failed to eradicate completely.