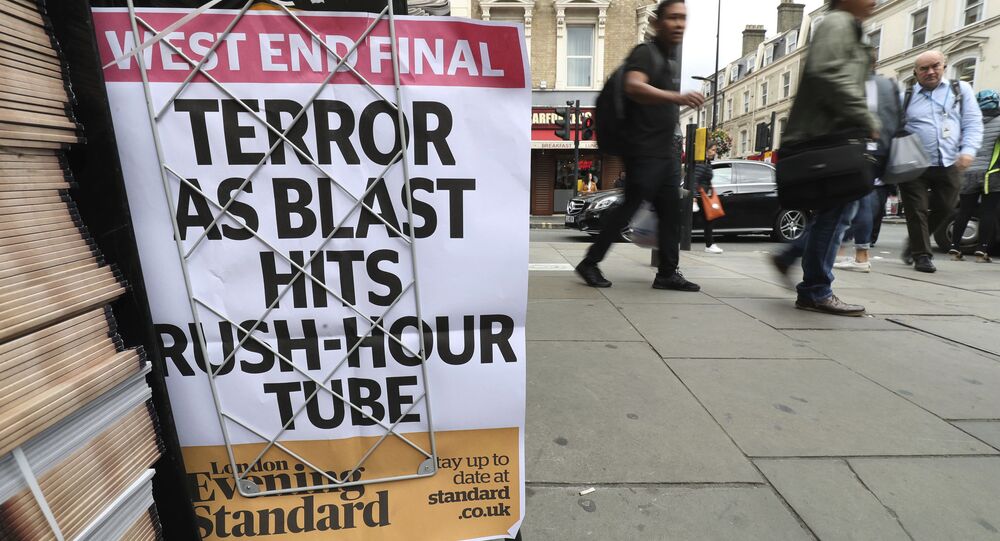 Tributes are being paid to the victims of the knife attack that occurred in Reading this weekend. Three people are dead and three others have been confirmed to be injured after a lone assailant carried out the attack.

Police have now confirmed they are treating the unprovoked attack as a terrorist incident, but the public has many questions regarding the attack and just how much was known by intelligence sources about the attacker prior to the tragic events on Saturday.

Could this tragedy have been avoided with tougher anti-terrorism laws? Dr David Lowe, a senior research fellow at Leeds Beckett University, shares his views on the ways in which intelligence agencies work to keep us safe.

Sputnik: What categorises this as a terrorist attack and how do we define terror attacks from other types of violence?

Dr David Lowe: Well, first of all, in relation to the attack, you look at the style of attack. Unfortunately, not just in the UK, but I think globally, we're sadly getting familiar with a knife or a sharply bladed instrument, an individual appears to be acting on their own and starting to stab, which results in fatalities and injuries to people.

The nature of the attack certainly could have been one of those that turned it from a murder inquiry into a terrorism inquiry. Of course, the advantage of going into a terrorism inquiry, it's schedule 8 of the Terrorism Act 2000 that takes over the conditions where the suspect is in a police station, compared to the Police and Criminal Evidence Act. So there's that side to it and, of course, the nature of the investigation itself of what they then look into and the powers that the officers have.

The other side, in relation to him being known by MI5 in 2019 - we have to appreciate that there is about 3,000 individuals who the UK security service and counterterrorism policing are actively looking at, who they perceive are the greatest risk. There are constant risk assessments being made and unfortunately, we've seen this in some of the attacks in the past where the individual came into the intelligence system, an assessment was made, but not deemed to be a high risk.

If we look at the fact that there is around 27,000 to 30,000, individuals who are in the system with 3,000 being actively looked at, who are declared the greatest risk, you see the enormity of the task that some of the security services and police face and the problem of trying to monitor every single person; it's virtually impossible to monitor everybody.

Sputnik: MI5 has come under fire for their inability to pre-emptively stop this attack - is that fair?

Dr David Lowe: I suppose it's always easy to pick on an agency like the security services, like MI5. I think what many people have got to understand is the high volume of information intelligence that comes through. Of course, the Joint Terrorism Analysis Centre in the UK, "JTAC", they will try and coordinate and analyse the information and send it on to the appropriate agency, be it MI5, the police, or both. I think if we also look at that against another set of statistics, just over 20 planned attacks were prevented since March 2017. Now, maybe to some that doesn't sound like too much, but when you think of how these investigations are run, the amount of work that goes into each one... I mean, for example, one recent one was the planned attack at St. Paul's Cathedral. If we balance that with how many have been prevented, we have to remember that's how active they are.

An individual on their own - it's just so difficult to try and prevent them and even Neil Basu, the current head of counterterrorism policing, his predecessor Mark Rowley and Andrew Parker, the director of MI5, has said this on numerous occasions that it's impossible to stop every attack that can happen.

© AP Photo / Aaron Chown
Police activity outside an address raided by officers from Britain's Counter Terrorism police in Dewsbury, England, Tuesday April 3, 2018. Two men are understood to have been arrested on suspicion of planning acts of terror

Sputnik: Should there be harsher sentencing for terror-related acts? Some have suggested minimum sentencing for people who simply look at terrorist materials.

Dr David Lowe: I think this is a difficult one. I know it's in the current counter-terrorism bill that the government's looking to introduce and it's been mooted. There have already been changes to people looking online, but they want to make it even stricter. I think the problem is how this is going to be legally defined.

Because there are people like me who are academics and researchers, we look at various materials, journalists who look at it. I think it's how it's going to be drafted; how the offence and the powers are drafted is going to be absolutely crucial, because what we have to be careful of is that it doesn't impinge on the freedom of expression and rights to privacy, and so on.

But of course, the most important human right is Article 2 and as far as the European Convention on Human Rights is concerned, "Right to Life" - that's the one we must protect. So it's having that as a driver for any legislation that comes in so we can protect people's lives from terrorist acts.