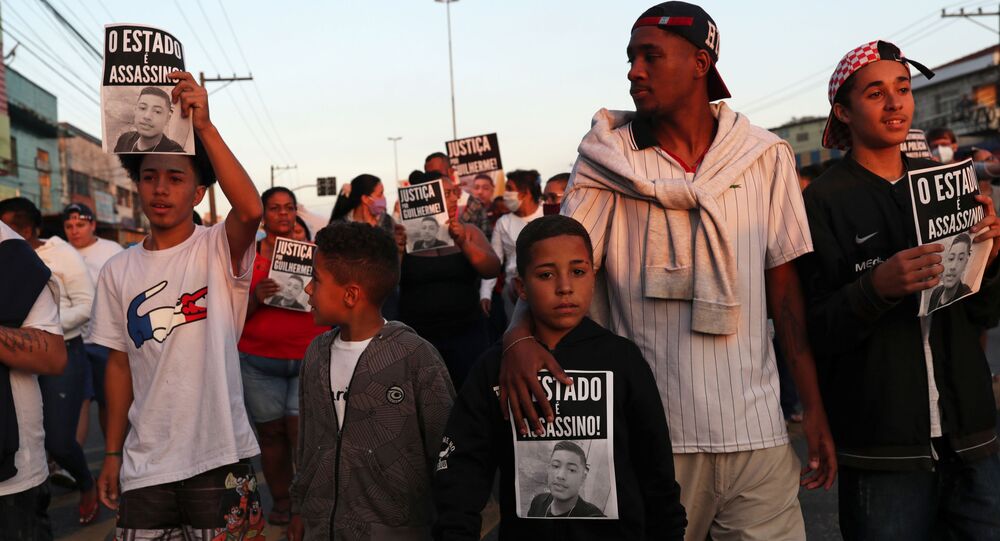 While Brazil struggles to cope with a rampant COVID-19 outbreak, police have also been killing around 10 people a day, including many minors, as Brazilian President Jair Bolsonaro continues to ignore the country’s constitution, Aline Piva, a researcher and journalist based in Sao Paulo, told Radio Sputnik’s Political Misfits on Friday.

“[The] research showed that during the quarantine, this time that people were staying more at home, the police here in Brazil [are] killing over 10 people a day,” Piva told hosts Bob Schlehuber and Jamarl Thomas, also noting that several victims of recent police killings were minors.

“That generated a lot of pushback by the communities ... it’s not as large as the protests in the United States or elsewhere, but still, there are a lot of people who are organizing, especially in those communities that are even more forgotten by the authorities and by the government now during this pandemic,” Piva added.

According to a report published earlier this month by Human Rights Watch (HRW), at least 606 Brazilian people were killed in the first four months of 2020 by police in the state of Rio de Janeiro, which has one of the most violent law enforcement units in the country. In April, when lockdown measures were instituted to limit the spread of COVID-19, police violence spiked in Rio, even though robberies and other crimes decreased dramatically: the state saw a 43% increase in police killings in April of this year compared to last year.

More than 75% of the nearly 9,000 people who have been killed by Rio police in the last 10 years were Black men, HRW reported. Across all of Brazil, police have killed more than 33,000 people over the last decade.

Hundreds of protesters have taken to the streets of Brazil to protest police violence and brutality in poor city neighborhoods known as favelas.

“The Black movement here in Brazil is gaining more traction over this past decade,” Piva pointed out, also noting that grassroots organizers in the country are giving “more strength to those movements.” However, many of those organizers are also “struggling for their lives” and “their livelihoods.”

Despite the fact that Brazil’s military does not want to be the face of Bolsonaro’s government, its members are still major supporters of the president.

Bolsonaro “still holds his base very close to him,” Piva noted, adding that many Brazilians are opposed to military dictatorships due to the country’s history.

“We lived under a very harsh military dictatorship until 1985, so we have this recent history … and we are seeing Bolsonaro taking that turn,” Piva explained.

The Brazilian military government, also known as the Fifth Brazilian Republic, ruled the country between 1964 and 1985. The authoritarian military dictatorship began following the 1964 coup d'état spearheaded by the Brazilian Armed Forces against the administration of then-President João Goulart.

Brazil on Friday surpassed more than 1 million cases of COVID-19, and there have been almost 49,000 deaths from the disease in the country, according to Johns Hopkins University data. In terms of both confirmed cases and deaths, Brazil is second only to the United States.

Bolsonaro has faced widespread backlash for downplaying the COVID-19 outbreak in the country and opposing quarantines, curfews and social distancing measures.