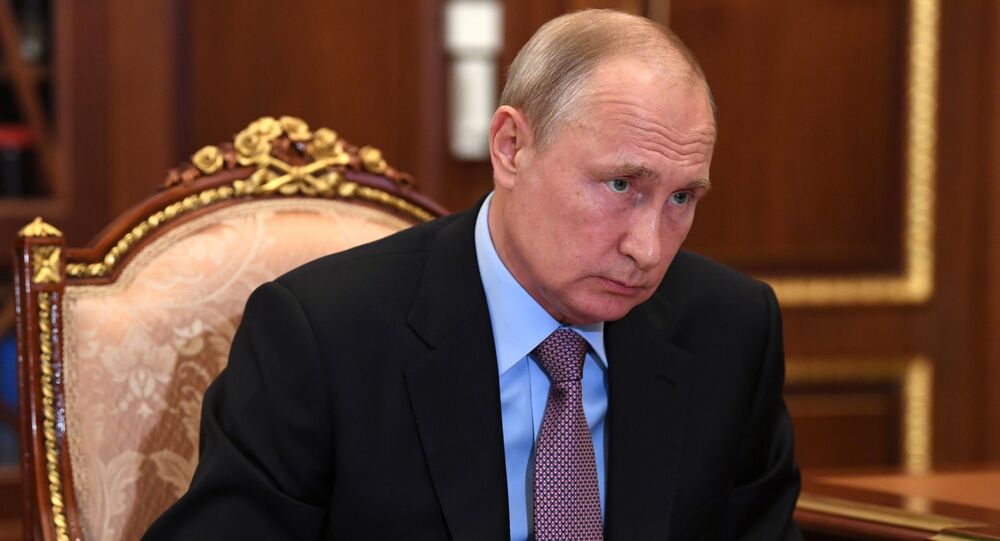 Russian President Vladimir Putin published a long form article denouncing attempts by western governments and media entities to demonize the USSR and diminish its role in defeating fascist Nazi Germany in the Second World War, while turning blind eye on their own shameful acts.

In an essay written in the wake of the 75th anniversary of the Victory in Europe, Russian President Vladimir Putin addressed the ongoing variety of attempts at historic revisionism, but stopped short of pointing fingers with respect to West's role in the start of the Second World War, according to Gilbert Doctorow, an independent political analyst based in Brussels.

"In fact, the hand of Putin is much stronger than he has cared to set out in this article. He is showing great restraint, and I would argue perhaps too much restraint given the fierce level of information wars against Russia that have been going on in the past decade", the political expert points out.

The analyst argues that Putin could have gone much further in his elaborations, pointing out that UK and French behaviour, which ultimately culminated in the signing of the Munich Betrayal, and was solely dictated by their national interests. Doctorow believes that the national interest at the time was to divert Hitler's attention so that Nazi Germany would attack the USSR and destroy Bolshevism, fulfilling the hopes of the English royalty and most of Europe's aristocracy.

Doctorow noticed that modern day attempts by Baltic states, Poland, Europe and the US to demonize the USSR and erase memories of its contribution to defeating Hitler also serve the national interests of these countries, which differ from state to state.

"[In the Baltic States and Poland] it served the purposes of nation-building. The revisionism has in recent years been given further amplification in the US, where fits of Russophobia have suited the cause of NATO's expansion and propped up American hegemony on the Old Continent", Doctorow says.

The analyst highlights that the nature of revisionism also differs in various countries – while eastern European countries are trying to blame the Soviet Union for triggering the war, the US mostly tries to diminish its input in ending it.

A Lesson on Avoiding Another World War

A similar conflict of national interests may create a ground for new conflicts, London-based political consultant Adriel Kasonta opines. The expert cautions western countries from continuing their practice of "scapegoating" problems on China and Russia, labelling them "enemies" in order to pursue national interests, while sacrificing those of the rest of the world.

"I think that in order to prevent our world to have another conflict, which will be a tremendous disaster for human beings living on this planet, we have to take into account that no one and not any country or the nation is the saint. We have to admit the fact that no one should be above the law and everyone has equal responsibility, especially in nuclear powers", Kasonta says.

The political consultant argues that, in his article on historic revisionism, Putin "encapsulated" key ideas on how mankind can avoid a new and disastrous conflict like the Second World War.

"The greatest tragedy in the history of mankind, were state egoism, cowardice, appeasement of the aggressor who was gaining strength and an unwillingness of political elites to search for a compromise", Kasonta indicates.

The political consultant pointed to the importance by modern powers to understand that the world has changed and that they can no longer perceive countries like Russia and China as "subservient", as it could lead to armed conflict, which would much worse than the Second World War.

The political analyst suggested that not only western countries, like France, the United Kingdom and the US, but also states like Russia and China have "equal responsibility to maintain a peace" in the world for the sake of all. Kasonta believes that major agreements between major states with conflicting interests, like the ones achieved in Yalta in February 1945, can still be achieved in the modern world if western powers recognise each country as "a legitimate partner".