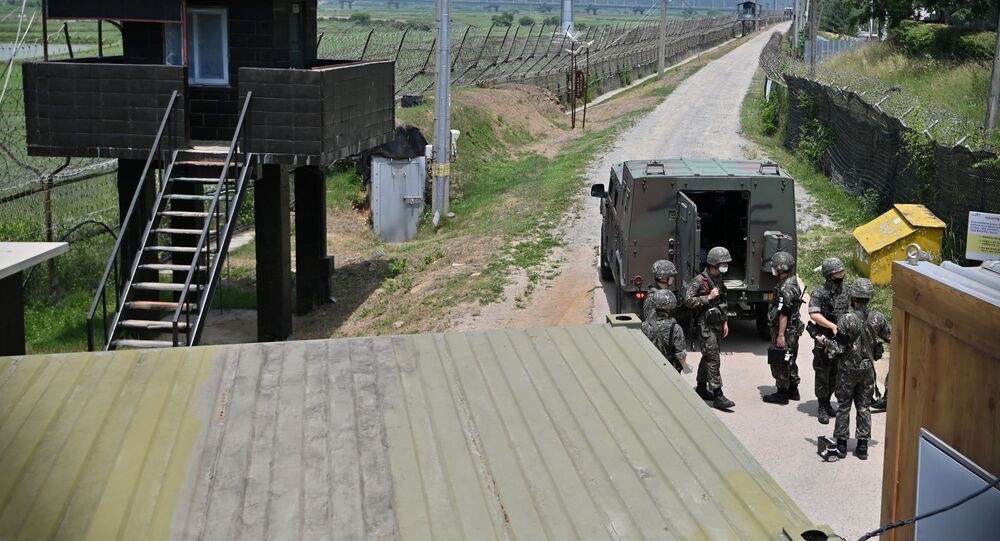 MOSCOW (Sputnik) - Despite growing tensions on the Korean Peninsula in recent weeks, North Korea is unlikely to further its provocations by testing Intercontinental Ballistic Missiles (ICBMs) before the upcoming US presidential election in November, experts believe.

This week, North Korea decided to demolish the liaison office with South Korea as part of a series of new provocations launched against Seoul. Pyongyang’s official explanation was that the demolition of the liaison office, which was established as part of the diplomatic legacies of denuclearisation talks, was to punish South Korea for failing to stop activists from sending propaganda fliers into North Korea.

After blowing up the liaison office, Pyongyang also threatened to redeploy its troops in the Demilitarised Zone between the two Koreas, the official Korean Central News Agency (KCNA) reported on Wednesday.

As tensions continued to build up on the Korean Peninsula, some political analysts raised the question if Pyongyang was ready to return to the days of advancing its nuclear program by testing ICBMs.

But South Korean experts are convinced that Pyongyang would be unlikely to boost provocations by testing ICBMs before the US presidential election in November.

"That [Testing ICBMs before US election] is just too much of a risk in my opinion because there will be real consequences and repercussions. Americans will take those provocations very seriously, particularly when the Trump presidency is in a perilous situation and trailing [Joe] Biden by some 14-15 percentage points. Trump may want to respond to these provocations very assertively to prove his leadership. If I were Kim Jong Un, I wouldn’t do that", according to Kim Jae-chun, an international relations professor at Sogang University in Seoul and a former South Korean government adviser.

The expert pointed out that North Korea had already proved its capability in producing nuclear bombs and wouldn't need to conduct more nuclear tests.

"It’s basically only ICBM tests for North Korea as they don’t have to test nuclear weapons anymore. Their nuclear weapons capability has been fully demonstrated. But for ICBMs, the atmospheric reentry technology and the technology that would guide the missiles to the target have not been proven. They may still want to do those tests", he said.

Facing growing nuclear threats from North Korea, US President Donald Trump traded insults with North Korean leader Kim Jong Un, when both threatened to take military actions against each other.

The international community joined the efforts in condemning the rapid progress of North Korea’s nuclear arms program. Members of the United Nations, including Pyongyang’s traditional allies like China and Russia, agreed to a series of strict economic sanctions against North Korea as part of their efforts to contain Pyongyang’s nuclear ambitions.

However, after Pyongyang announced it had successfully obtained nuclear capabilities following an ICBM test in late 2017, Kim Jong Un signaled he was willing to engage in denuclearization negotiations from the beginning of 2018.

Trump and the North Korean leader agreed to hold two face to face meetings in Singapore and Vietnam to negotiate the details of the denuclearization process on the Korean Peninsula.

© AP Photo / Evan Vucci
n this June 12, 2018 file photo, U.S. President Donald Trump, right, shakes hands with North Korea leader Kim Jong Un at the Capella resort on Sentosa Island in Singapore. Kim’s fifth meeting with Chinese President Xi Jinping continues his ambitious diplomatic outreach that has included summits with the leaders of the United States, South Korea and Russia in the past year and a half. Experts say Kim is attempting to form a united front with North Korea’s main ally China to strengthen his leverage in the stalled nuclear negotiations with the United States.

As part of the goodwill gestures, North Korea dismantled a number of its missile test and nuclear test facilities before the second summit in Hanoi, Vietnam in February 2019.

But Trump walked out of the summit in Hanoi after he said the United States wouldn't lift strict economic sanctions until North Korea had got rid of its entire nuclear arsenal.

Following the failed summit in Hanoi, the denuclearisation negotiations between North Korea and the United States stalled.

As Pyongyang became increasingly impatient under economic difficulties brought by the tough sanctions, North Korea announced late last year that it planned to resume its nuclear arms program and tried to put more pressure on the United States.

Professor Kim suggested that North Korea may conduct ICBM tests after the US presidential election, especially if a new president comes into office.

"Their habit is to launch provocations after the new administration comes in. They sort of try to test the nerves of the new administration that just came in. But time and time again, that strategy didn’t really work out. If North Korea’s objective was to bring back Americans to the negotiations with terms more favorable to North Koreans, I don’t think that’s going to happen", he said.

The expert argued that Biden could be a more difficult president for North Korea to deal with.

"I don’t think [Joe] Biden will be more giving in to North Korea or be more submissive to North Korean demands. I don’t think Biden will even meet with Kim Jong Un if certain conditions the Americans are imposing on denuclearization are met. It’ll be a traditional bottom-up approach as opposed to the top-to-bottom approach taken by Trump", he said.

Joe Biden is the US presidential candidate from the Democratic Party, who is expected to run against Trump in the upcoming election in November.

Instead of testing ICBMs and triggering harsh responses from the Trump administration, North Korea has been restricting its latest provocations towards South Korea.

Professor Kim explained that Pyongyang’s decision to target Seoul was a part of its calculated approach to use those provocations for domestic purposes.

"South Korea is the weakest country in the region. I think it is really a calculated provocation. North Korea is in a dire economic situation right now. When you’re in such dire situations and people are not really happy about it, as a leader, you tend to take the issue overseas. The provocation also serve such diversion purposes in my opinion", he said.

Professor Kim suggested that Kim Jong Un’s health conditions and his sister Kim Yo Jong’s rise could give North Korea more reasons to create such diversions among the domestic audience.

Amid the global COVID-19 pandemic this year, North Korean leader Kim Jong Un disappeared from the public’s view for several weeks and rumors began to emerge that he may have experienced serious health problems.

As speculations continued to circulate about the North Korean leader’s health conditions, his younger sister came under the spotlight as she took a larger role in fulfilling some of Kim’s duties and had been viewed as a successor in case Kim’s health wouldn’t allow him to continue to lead the country.

"I’m more inclined to believe North Korea has a strategic goal. I think Pyongyang is facing increasing pressure from the domestic economic situation, as economic activities between China and North Korea fell sharply amid the COVID-19 pandemic. That’s why North Korea has a sense of urgency to lift the external sanctions that are limiting its economic growth", Zhao Tong, a fellow in Carnegie’s Nuclear Policy Program at the Carnegie–Tsinghua Center for Global Policy in Beijing, said.

The expert pointed out that North Korea appeared to be determined to use its provocations to achieve this goal when Pyongyang announced its policy change at the end of last year.

"Cutting off the relations with South Korea could be the first step. We can’t rule out further provocations that could anger the United States in the future, such as conducting missile tests", he said.

Both of the experts noted that North Korea had realized South Korea couldn’t do anything on sanctions relief, which would explain Pyongyang’s aggressiveness against Seoul.