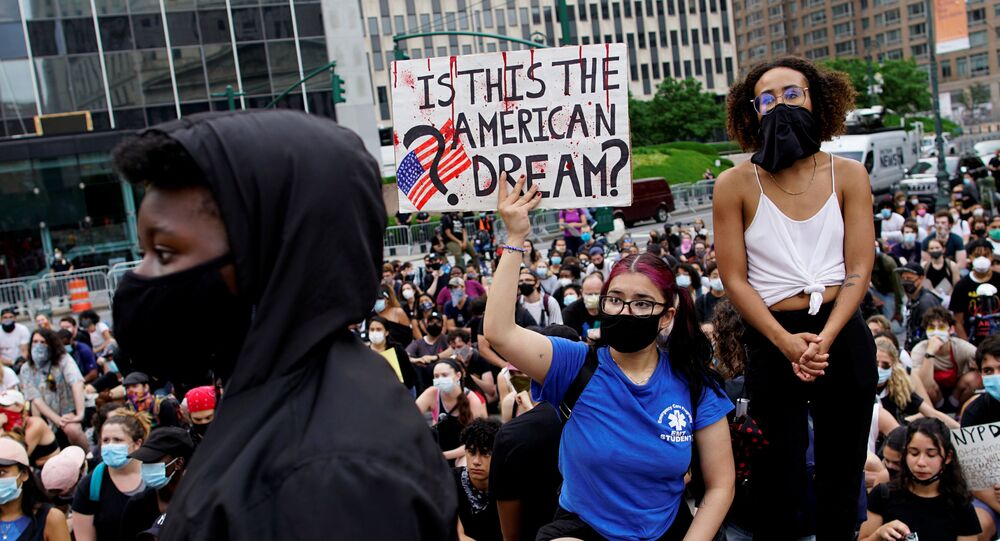 Trump needs to find a balance between supporting the police and making a peaceful reconciliation with the black community, says author and media commentator Dr Qanta A. Ahmed, explaining why flirting with the idea of defunding the police is dangerous and unfair towards law enforcement agents.

On Tuesday, Donald Trump is due to sign an executive order to “encourage police departments nationwide to meet the most current professional standards of force” as part of a broader set of measures aimed against racial inequalities and police brutality voiced by the president last Thursday.

The Trump administration does not endorse the "defund the police" campaign supported by Democratic governors, mayors, and lawmakers amid the nationwide Black Lives Matter protests over the killing of George Floyd, a 46-year old African-American man by a white police officer. “We’re not defunding the police, in fact we’re going the opposite route”, Trump said on 11 June in Dallas. The George Floyd protests that have been raging on in the US since 26 May have led to violent clashes with the police, looting, and toppling of monuments across the country.

Americans are Losing Sense of Safety, Law, and Order

The spiralling unrest which coincided with the COVID pandemic has complicated the already dire situation in the country, admits Dr Qanta Ahmed, a member of US the think tank the Council on Foreign Relations (CFR), author, and broadcast media commentator.

"This unrest that happened because of the atrocious George Floyd killing was absolutely devastating to us, especially as we saw how badly New York and New York City were damaged", she says. "And the city was already struggling because of the pandemic. And now to see all of the damage, the broken glass, the boarded up shops, there’s a sense of unrest, and there's a sense of loss of safety that we can feel for those of us in the city for a long time. So that was a massive blow".

Under these circumstances it is especially astonishing that people are calling for the defunding of police, according to the author.

The "defund the police" campaign kicked off by the protesters has received political endorsement from the Minneapolis City Council, as well as officials from Los Angeles, New York City, and Oregon. In some cities the American police have literally ceded streets and districts to protestors under pressure from local authorities.

"In Seattle in the Pacific Northwest in Washington state… the police had actually voluntarily given up their precinct to the protesters and the protesters were now controlling a six block radius of the city", Dr Ahmed elaborates. "We have some politicians in New York City, Mayor de Blasio and Governor Cuomo effectively asked the police to hold back while the looting and rioting and burning of police cars occurred, including in downtown New York City, in Soho, a very expensive area. So we have lost our sense of safety and law and order".

This is what’s been done to the Capitol Hill neighborhood in Seattle by those in the “autonomous zone.” #antifa #BlackLivesMatter #CapitalHillAutonomousZone pic.twitter.com/rScE82WxFK

​According to the scholar, it's not hard to imagine what this trend may lead to given that Americans have been hastily stockpiling arms amid the pandemic: if the police are actually defunded and disbanded, "this maintaining law and order, protecting one's homestead is going to come down to the Second Amendment", she foresees.

And this is already happening: in early June, the local population of Massapequa Park, a hamlet within the town of Oyster Bay in Nassau County, New York, came out with their weapons and confronted protesters, asking them to turn around.

"That is pitting American against American. And that's what I'm very afraid of", Dr Ahmed underscores.

'Criticism for Trump's Response to Protests is Poorly Placed'

The scholar does not share the stance that Trump's response to the protests "knocked the US off its soapbox", as CNN noted on 6 June, or that it is exacerbating the problem.

"I think the criticism for his response to the protest was very poorly placed", she opines. "Many of us are watching the violence… The president's response was in reaction to the unwillingness of local politicians to contain and abbreviate these, not the protest, so much as the unrest and the violence now".

Democratic lawmakers and the left-leaning mainstream media are lambasting the president for opting for a "militarised response" and deploying National Guard personnel. Thus, Mayor of Washington, DC Muriel Bowser claimed on 7 June that the president's actions had turned out even more protesters and urged Trump to remove National Guard troops and federal forces from the city.

According to Dr Ahmed, local Democratic politicians are playing "a very dangerous game" by demonstrating unwillingness to impose law and order and trying to prevent Trump from doing this.

And they're proceeding with these efforts not because they think that their cities "would be better with that": "They are taking these extreme positions and allowing the process to continue and sometimes become violent because it damages President Trump and it threatens his re-election", she believes.

Trump Should Support Both Police & African-Americans

Given all of the above, Donald Trump "has to walk an extremely fine line between promoting law and order and he really does need to support the police they very much need to be supported after these uprisings – more police officers are resigning than ever before", Dr Ahmed believes.

Thus, 57 police officers who comprised the entire Buffalo police department (BDP) tactical unit resigned in June amid the protests, while at least seven policemen quit in Minneapolis with another seven reportedly being in the process of stepping down.

According to the scholar, American policemen, who have an extremely high-risk job and are facing lethal danger all of the time, have recently found themselves between a rock and a hard place.

"They are abused by every sector of society", she highlights. "Every law enforcement officer I've ever looked after, whether it's male, female, whether it's African-American, Caucasian, Asian, Latino, Latina, they all are fearful because they are subject to so much spontaneous violence as part of their day-to-day routine".

However, on the other hand, the president "has to make a peaceful reconciliation with African-American people in the United States", she insists, stressing that blacks "are most definitely unfairly treated and discriminated against and have been disadvantaged since even before the inception of the United States".