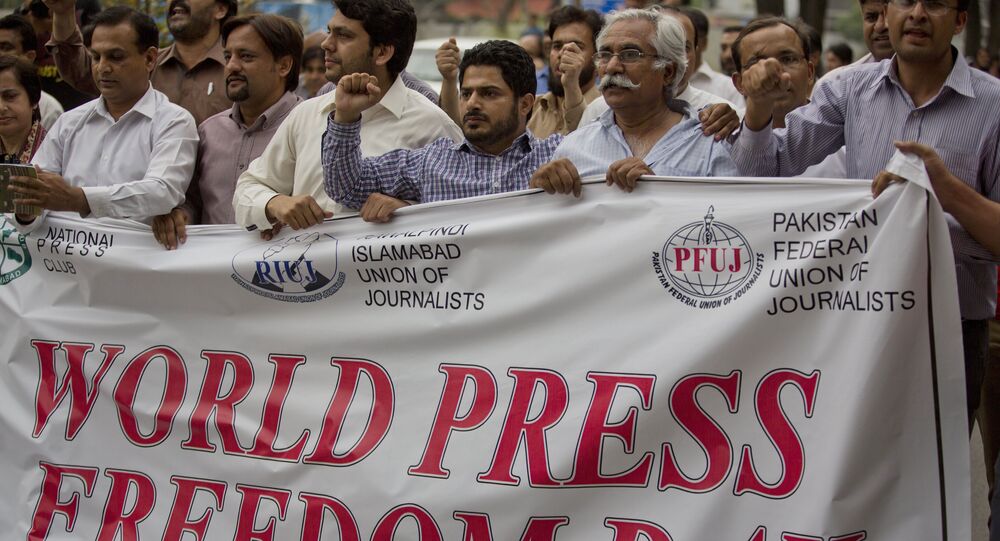 Series of Attacks, Cases Against Journalists: Is Press Freedom Shrinking in Pakistan?

New Delhi (Sputnik): Paris-based Reporters Without Borders ranks Pakistan as 145th out of 180 countries in its World Press Freedom Index 2020, while US-based Committee to Protect Journalists in its “Global Impunity Index 2019”, which includes countries where “journalists are slain and their killers go free”, ranks Pakistan eighth.

After two journalists were recently killed in Pakistan, the country's media organisations have urged the Imran Khan government to put in place strong measures for media persons' safety.

On 26 May, journalist Zulfiqar Mandrani was found dead after being shot twice in the head. In February, another journalist, Aziz Memon, was found dead in a canal with a microphone cable wrapped around his neck.

Several Pakistani media organisations have ventured that journalists are no longer safe in the country amid the prevailing circumstances. They claim that their colleagues are being threatened, abducted or even killed, but the government is doing precious little to protect them or nab the people behind such acts.

According to Pakistan-based media and development sector watchdog Freedom Network’s "Annual Press Freedom Report 2020", at least 91 cases, including seven murders of journalists, were documented in Pakistan between May 2019 and April 2020.

Over the past year, there have been reports of seven journalists being killed, two abductions, nine detentions, eight instances of frivolous lawsuits, and 10 cases of censorship.

Pakistan's capital city of Islamabad has emerged as the riskiest and most dangerous place to practice journalism, with 34% of the violations (31 out of the 91 cases) recorded, followed by Sindh province (24 cases).

Several media organisations have revealed that under the Imran Khan-led Pakistani Tehreek-e-Insaf government, which came to power in August 2018, hostility towards the proverbial fourth pillar of the state - Journalism - has increased manifold.

“This is an indication of how freedom of expression and media are haunted by brazen censorship; targeting of journalists through threats, assault, arrests instilling extreme fear and self-censorship; and exposes the fallacy of Pakistan’s ‘democratic’ system”, Shahzada Zulfiqar, president of Pakistan Federal Union of Journalists (PFUJ), said. By registering fake cases against journalists, he said, the government is making a mockery of the rule of law.

Meanwhile, in Pakistan's neighbourhood, Delhi-based Rights & Risks Analysis Group (RRAG), which describes itself as an independent think-tank, opined that India has been emerging as the riskiest place for journalists around the globe during the COVID-19 lockdown. Over 50 journalists faced arrests, police complaints, legal notice, physical assaults, etc. for reporting on the pandemic or exercising their freedom of opinion and expression during India's lockdown.

A media expert based in India stated that it is not just Pakistan, as even Indian journalists are witnessing a similar fate. He said some of them are getting booked under anti-terrorism acts, draconian laws, including the Prevention of Electronic Crimes Act (PECA), and sections of the Penal Code for sedition and defamation, despite there already being specific laws for defamation.

"The system in several countries including India and Pakistan has made the press to kneel down. We are so called fourth pillar of democracy. But in today's time where a journalist can't even report on certain things or gets attacked or threatened for reporting on something, makes me think if we (media) exist or not", said Shishir Soni, ex-vice president of the Press Association of India.

The report came as India went into national lockdown on 25 March in a sudden move announced by Prime Minister Narendra Modi. The government believes such a measure was necessary to save the country of 1.3 billion people from the COVID-19 pandemic.