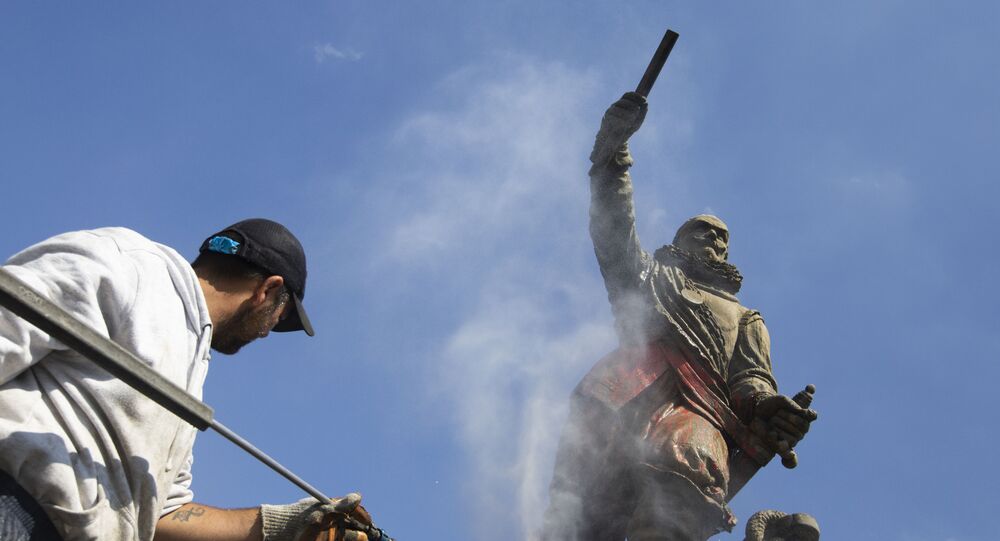 As numerous historical monuments are being vandalized in cities across Europe by anti-racist activists, right-wing politicians and community groups have been stepping in to protect historical heritage.

In Rotterdam, where a statue of the Dutch colonial admiral Piet Hein and a memorial to assassinated right-wing politician Pim Fortuyn were defaced at the beginning of June by a group that calls itself “Heroes of Never”, conservative liberal municipal legislators, as well as Feyenoord football club fans decided to put an end to vandalism. According to Ehsan Jami, who represents the right-wing “Liveable Rotterdam” party in the municipal council, anti-racism rallies should be allowed, but any attempts by demonstrators to destroy property must be prevented.

Sputnik: We’ve been seeing recently that statues of various historical figures are being vandalized in the US, in the United Kingdom, as well as in the EU countries, including the Netherlands. What is your opinion about this “war on memorials”?

​Ehsan Jami: This is a sad a part – the history repeating again. There are some folks, mostly on the left side, who are defacing statues, our national statues, with accusations of slavery, or whatever they believe to be important for them, which is not true in this case. For example, they think that Pim Fortuyn was a racist, which is not true. You know, I think mostly what these folks don’t understand, is their lack of knowledge of history. I’m sure you’ve heard the news about the Piet Hein statue – he was anti-slavery, he freed two ships back in the 1600s. The Netherlands didn’t even exist by then. These folks don’t have the knowledge of that part. I think that what it comes down to for them is that if you’re white, and you’ve done something shady in history – you must be a bad person. So, it’s really an anti-intellectual matter in this case. It’s really bad. We, as “Liveable Rotterdam” party, asked the mayor to make sure that it doesn’t happen again. So we have to make sure that we have a mobile camera there to guard our statues.

​Sputnik: It looks like people of Rotterdam have been taking matters into their own hands to protect the city’s historical heritage. On Saturday local football fans decided to defend Pim Fortuyn’s monument from further vandalism. Does it mean that the police or the municipality have not been doing enough to take control of the situation?

Ehsan Jami: The people of Rotterdam are indeed taking matters into their own hands – even washing the statue before the City Hall can do it. Now, I believe that we have this Black Lives Matter movement, or anti-racism movement and we give too much room for them to loot and to riot. I think this is wrong, we need the “iron hand” of the law in this case. They are free to demonstrate, we facilitate that, no problem, but you cannot touch our property – period. This should not be tolerated whatsoever. What we see now is that the government, or the City Hall, the municipalities, they are tolerating these matters, because they don’t want to look like they are cracking down on anti-racism, or they don’t want to be seen as racist, or something like that. I’m sorry, but this is really insane what we’re witnessing here. That’s why my political party is pushing towards law and order, to make sure that we do have law and order. Yes, you are free and you should demonstrate, we facilitate that, but you cannot touch our statues.