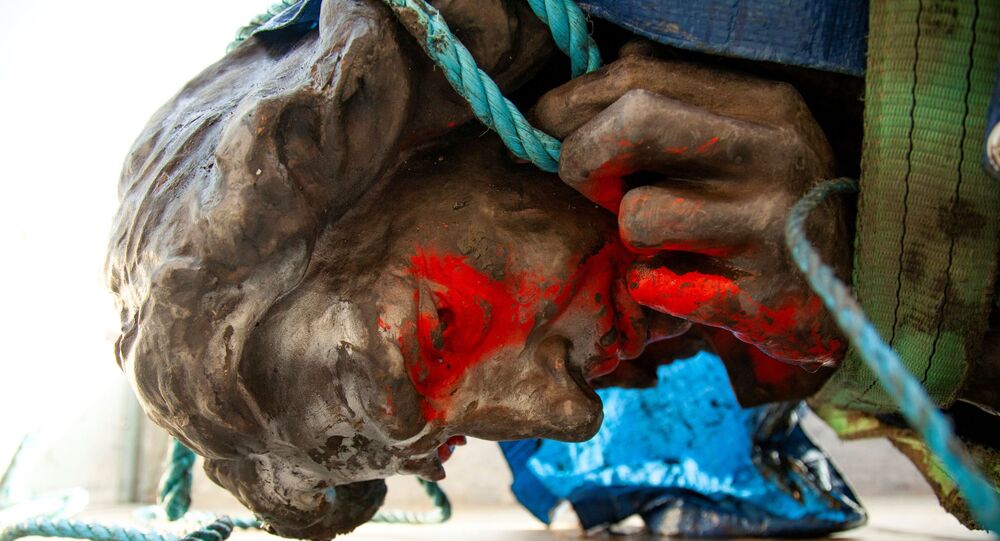 Oxford University’s vice chancellor has warned that removing statues of controversial figures could effectively whitewash history. The comments come after anti-racism protesters in the UK called for a statue of Cecil Rhodes, a noted Victorian-era imperialist, to be taken down from its current position within the university’s Oriel College.

A statue of Edward Colston, a slave trader and philanthropist, was torn down last week in Bristol by demonstrators, prompting fears that further violence could be seen this coming weekend.

But have the protests in the memory of the death of George Floyd gone too far?

Henry Bolton, the leader of the Our Nation Party, gave his views on the matter…

Sputnik: Do you think that the Black Lives Matter protests have become too violent?

Henry Bolton: Absolutely I do, and if you look at the Black Lives Matter website or their fundraising site, they state quite clearly there certain objectives, such as to undermine Western society, capitalism, and so on. These aren’t anything to do with equal rights for black people or black lives matter; this is politics on the left wing.

Some people who are at the leadership of Momentum, who are the extreme left element of the Labour Party, have been stirring this up by naming and pointing certain statues out, and highlighting them for targeting, because the people they commemorate may have been involved in slavery or some such thing.

This is becoming ridiculous now; there are even calls to remove the statue of Lord Salisbury, who was the British prime minister who brought about the global legal abolition of slavery. Robert Baden-Powell had certain political views that were about being more robust in policing and governance which gave him some sympathy for some of the things that the Germans were talking about in World War II, but he is also the man who brought about a global movement - the scouting movement - that has taught generations service to community, putting others before themselves, and a sense of altruism.

This is not about Black Lives Matter anymore - and of course, they do matter; this is about a destruction of British history and identity, and it cannot be allowed to continue.

Sputnik: Should the police do more to crack down on violent protesters?

Henry Bolton: I think that’s inevitably the case, these protests have been triggered by the death of Mr Floyd and that was brought about by a police officer using excessive force, and indeed, quite rightly, he is being brought to justice and so are the other police officers who were party to that.

Of course, that makes this particular set of protests very sensitive. I have no doubt that the British police, prime minister, and home secretary have been very sensitive and tried to avoid any confrontation between the police and protesters that may result in a protester getting hurt, because that would obviously enflame the situation dramatically.

© AP Photo / Ben Birchall
Tearing Down Symbols of Slavery and Racism Should be Applauded
That said, if the police stand by and allow laws to be broken - that in itself undermines the integrity of the rule of law and weakens society. It’s a very difficult situation for them to be in; however, I think that they have got it wrong.

I think that we will see an increasing momentum of these protests, the criminal damage, and the calls for British history and symbols for that to be removed, and I think that is a result of encouragement through appeasement from the police. I think that the police need to be far more robust.

Sputnik: Is the UK a racist country?