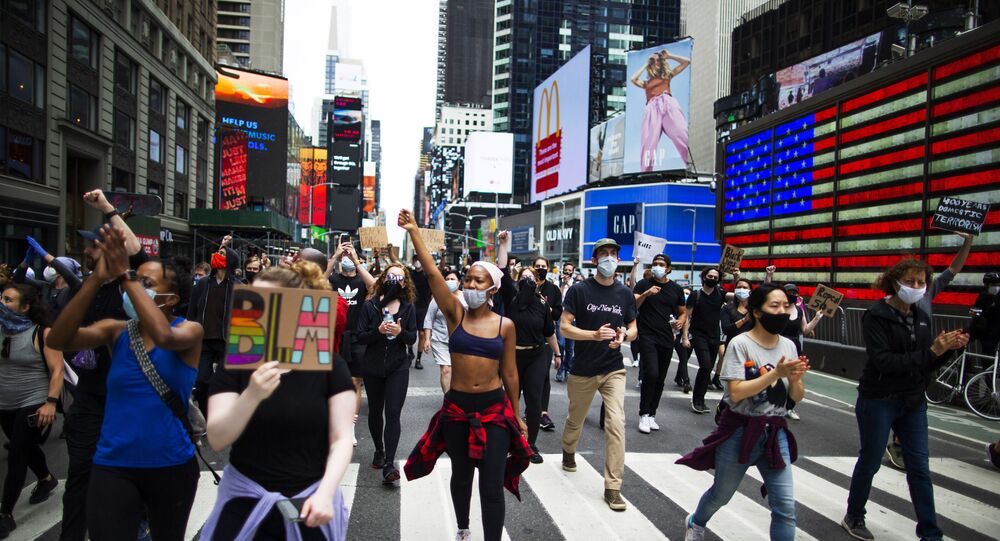 US is Not a Model for France, What We Actually Demand is Equality, Black Association Leader Says

Many French political, media, and intellectual figures are challenging the parallel between racism in the United States and France in the name of French universalism. Louis-Georges Tin, the honorary chairman of CRAN, has spoken to Sputnik about why universalism is allegedly hiding the dogma of racism in France.

Around the world, the death of George Floyd has brought the debate on racism to the forefront, particularly in Western countries. In France, however, we are witnessing an outcry from parts of the political, media, and intellectual classes, who refuse to accept that there is "systemic racism" and "white privilege" in the country. And all this in the name of universalism.

Honorary Chairman of the Representative Council of France's Black Associations Louis-Georges Tin said in an interview with Sputnik that there is "systemic racism" in France, initiated by the state. He denounced the policy in which black migrants are more often targeted and racists are protected by the law.

He also rejected the existence of the universalist French model, which distinguishes France from the United States, and is referred to exclusively by "white bourgeois Catholic and heterosexual elites".

According to Louis-Georges Tin, who proposed the establishment of an International Day Against Homophobia and Transphobia in 2005, the elites bury their heads in the sand when faced with real challenges.

© REUTERS / GONZALO FUENTES
People run from tear gas as they attend a banned demonstration planned in memory of Adama Traore, a 24-year-old black Frenchman who died in a 2016 police operation which some have linked to the death of George Floyd in the United States, in front of courthouse in Paris, France June 2, 2020

Sputnik: Would you say that certain politicians, media figures, and intellectuals are hiding behind French-style universalism in order to avoid addressing racism in France?

Louis-Georges Tin: Absolutely. I am a universalist, but the universalism some people talk about is more like a form of uniformitarianism. That is, elites – usually white, bourgeois, Catholics and heterosexuals – usually say: "Universalism is me. You have to follow my model, and if you're not like me, you're a communitarian". That's the social discourse that we've been hearing in this country for 30 years. It's almost funny to me, and if the situation wasn't so bad, we'd be laughing about it even more.

Sputnik: Can we speak of systemic or systematic racism in France today?

Louis-Georges Tin: We have to talk about systemic, not systematic racism. We cannot say that all police officers are racist, so we are not talking about systematic, but systemic, in the sense that there are policies that push them to hunt immigrants, especially black immigrants. And those who spoke of racism in the police were disposed of and racists were protected. The hypocrisy of the Inspectorate General of the National Police (IGPN) has made this clear. From that standpoint, the racism is systemic.

By the way, this is exactly what the Court of Cassation said in its very important decision, made several years ago, ruling that the authorities had made a gross mistake in the case of racial profiling. The charges were brought not only against police officers but also against their superiors, as the Court of Cassation has convicted both police officers and the state itself for making a serious mistake.

The court understood that there is such a system where the state is involved, so we are talking about state racism because to judge by appearance is racism. And this form of racism has been introduced and is protected by the authorities. This does not mean that all civil servants, to which I belong, are racists. But it does mean that there is a system that protects racists.

Article 40 of the French Code of Criminal Procedure stipulates that every public official must report an offence of which he or she is a victim or witness. Some do not do so and are therefore also to blame.

© REUTERS / GONZALO FUENTES
People block the road as they attend a banned demonstration planned in memory of Adama Traore, a 24-year old black Frenchman who died in a 2016 police operation which some have likened to the death of George Floyd in the United States, near the courthouse in Paris, France June 2, 2020

Sputnik: Which model do you think is best suited to combat racism: French universalism or the more communitarian American model that recognises ethnic differences?

All those who say they are universalists consider themselves the centre of the world. No one can embody everyone all at once. Universalism without women, people of colour, foreigners, people with disabilities, without the poor is not universalism. We like to think that we are the best in France, but we must stop thinking that we are better than others.

Sputnik: What about the American model?

Louis-Georges Tin: We do not believe that the US is a model for France. What we actually demand is equality. Equality is mentioned in our republican motto and Article I of our Constitution. There is no need to look for a model somewhere else. It's just that we don't stick to our own values, we're below ourselves.

We are in constant denial of reality and at some point, we need to realise that there is a problem in France, and this does not only concern people of colour. We are talking about violence against women and about paedophilia... Those who are the victims are always told to "shut up" or "hide" because we need to preserve our national illusion.

Sputnik: How do you assess the political response in France to the issues raised around the world by the death of George Floyd?

Personally, I wouldn't bet that Macron's policy would change overnight. I have more confidence in the people's movement than in politicians, especially when it comes to a man who has lied several times on various issues.