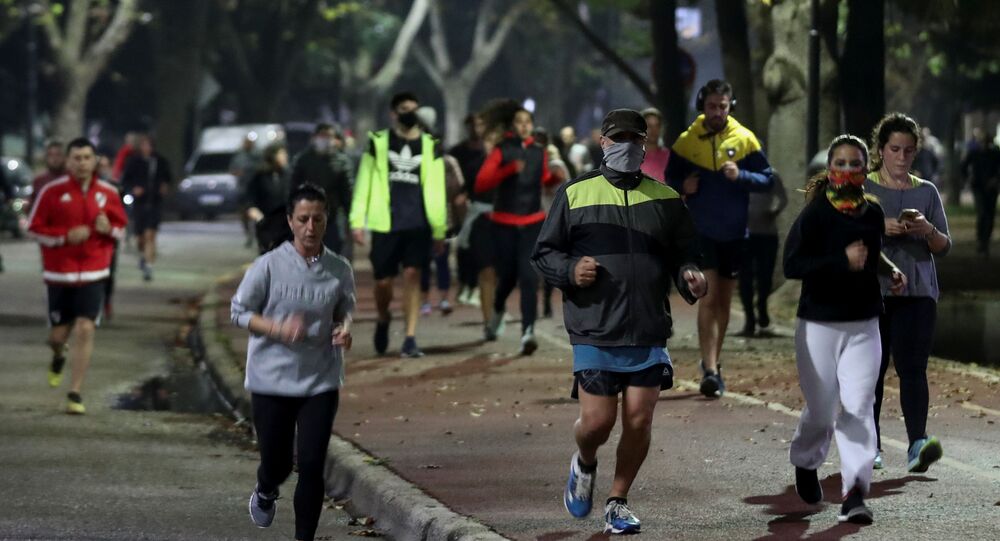 Argentina has extended the lockdown in its capital and some other regions until 28 June as the number of confirmed coronavirus cases has mounted to over 22,000, despite observers warning that the strict quarantine may bring more economic pain to the country, which was suffering from recession even before the pandemic.

However, Argentine President Alberto Fernández has responded to his critics that while one "can recover from a drop in the GDP", one "can’t recover from death". It appears that Argentina's immediate neighbour, Brazil, to some extent illustrates Fernández's point: having rejected strict coronavirus measures, the country's government now has to deal with over 707,000 COVID cases, with the coronavirus death toll reaching 37,134 people. Having become Latin America's coronavirus hotspot, Brazil may lose its attraction in the eyes of foreign investors, warns CNBC, projecting that the country's gross domestic product (GDP) could drop by 4% in 2020.

"I believe Argentina’s strategy of handling the COVID crisis is working very well, especially considering the experiences of some of the other countries across the region", says Gonzalo Fiore Viani, a lawyer and political analyst from Cordoba. "You have to look at Brazil’s case. Over the last five days, the country had over 1,000 deaths per day. Besides, their economy is not doing better. Brazilian industrial production plunged 9.1% in March from the previous month".

He notes that for this year, the International Monetary Fund (IMF) already anticipates a contraction of 5.3% in the country's GDP. In addition, the Brazilian real is depreciating quickly against the dollar, the analyst highlights.

"So far this year, the South American giant's currency has depreciated 41.82% against the greenback", Viani notes. "The devaluation only in the last seven days was 4.5%".

On the other hand, the negligence of the government of Jair Bolsonaro to curb the disease amid the rapid spread of the coronavirus infection makes the South American nation a potential health catastrophe for the entire region, according to the analyst.

"Bolsonaro's responses to the pandemic worry the Argentine government, fearful of encountering a health catastrophe in the neighbouring country", the analyst says, suggesting that the "different responses of Planalto and the Casa Rosada" are yet another sign of increasing Brazil-Argentina contradictions which started to emerge after "Peronists" returned to power in Buenos Aires.

Brazil still remains Argentina's largest trading partner and accounts for 70% of Latin America's GDP; besides this, the two share a 1,100-kilometre border. In late March, Fernández warned that Bolsonaro's approach to COVID could put Argentina at further risk. Since then, the pandemic situation in Brazil appears to have spiralled out of control.

Viani elaborates that Argentina's concerns are justified given that it is also facing economic hardships which largely originated from ex-President Mauricio Macri’s liberal financial policies and the former president's decision to increase the country's debt burden by taking $56 billion from the IMF.

"Fernández has a very complicated situation in this sense because he has to resolve structural problems the country has had for over a decade", especially given the COVID-driven global economic recession, he observes.

While it is too early to make any forecasts, Viani believes that the president's strategy to put the people's health above businesses and profits will help the country to weather the upcoming economic difficulties better than it would have done if it had embraced the Brazilian or Swedish models.

'It's Time to Build Bridges'

Like many other international observers, the Argentine political analyst believes that the world will never be the same when the coronavirus pandemic is over. He cites Pope Francis, an Argentine-born priest, who urged the world's governments to adopt a more humane and communal approach during the pandemic. In his latest book, "An Anti-Globalism Globalisation", Viani echoes the pontiff, arguing that "isolationism" is by no means a remedy for the post-COVID world.

"The book is specifically about the need to build bridges instead of walls", the analyst says. "I believe it is very relevant right now because with the pandemic that the world is going through, the shortcomings of multilateralism and the politics of the blocs became even more evident".

He opines that neither the G7 nor the G20 provided a strong joint response to the pandemic. Likewise, the European Union did not act effectively, failing to timely stretch out a helping hand to its member states in need amid the COVID-19 outbreak. European unity is bursting at its seams, while Eurosceptics have renewed their calls for leaving the bloc, Viani highlights.

According to him, leaders like Trump and Bolsonaro, who are placing emphasis on "the dichotomy between tradition and modernity" and "erecting walls that separate the peoples", do not have a clue how to fix the world's economic, political, and social situation either.

"Like Pope Francis always says: 'Bridges already exist, and they are more than walls'", Viani says. "Today, in the midst of the most serious crisis that humanity is going through in the last seventy years, it is essential to start going over those bridges".

Messi Donates 500,000 Euros to Fight Against COVID-19 in Argentina - Reports