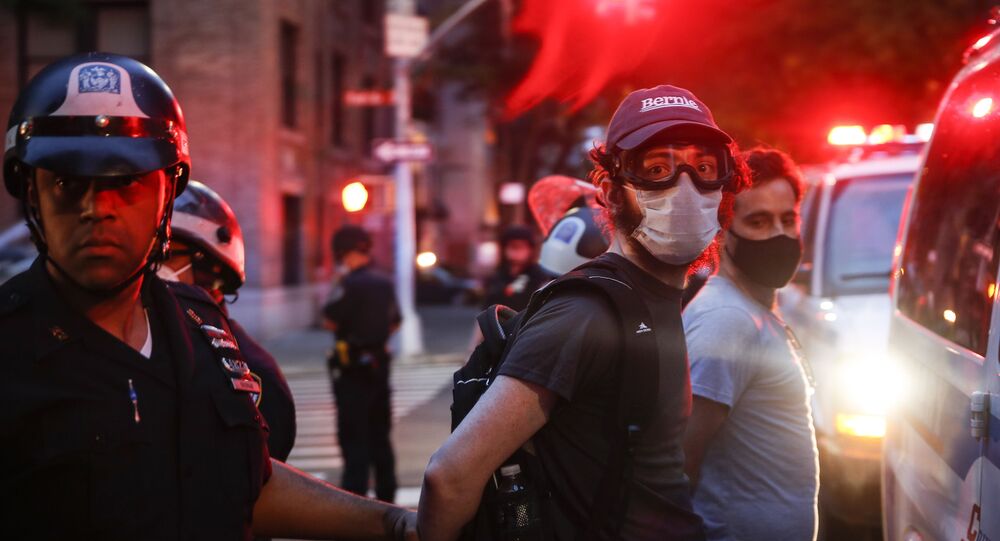 The calls to defund or dismantle the US police force altogether have become a leitmotif during the protests over the killing of George Floyd, a 46-year-old African American, at the hands of a white police officer on 25 May in Minneapolis. International criminal experts have weighed up the consequences of the "defund the police" campaign.

On Monday, House Democrats introduced The Justice in Policing Act of 2020, legislation that makes it easier to prosecute police for misconduct, bans chokeholds, eliminates unannounced police raids, and addresses the racism issue. The sweeping police reform bill was proposed by the Dems a day after Minneapolis lawmakers pledged to disband the city's police force.

On Sunday, nine out of 12 Minneapolis City Council members vowed to dismantle the Minneapolis Police Department, promising to create a new system of public safety instead. Given that the city's police budget in 2020 was $193.3 million with 892 sworn officers and 175 civilian employees, the move would create additional fiscal space. However, according to The Star Tribune, the largest newspaper in Minnesota, neither the defunding nor dismantling will happen overnight as there have been no agreements on the details struck so far.

The ongoing protests and pleas to defund the police originate from "the persistent inequality before the law that African Americans confront on a daily basis", according to David Goldfield, the Robert Lee Bailey professor of history at UNC Charlotte.

"Violence under the cover of legality is nothing new to the African American community", the historian says. "It existed during the slavery era, during the Jim Crow period, and continues today. The key difference now is that we have cell phones that record the assault and murder of our fellow citizens and social media to spread the alarm. This is a technological change that will hopefully result in a social change".

“Defund” means that Black & Brown communities are asking for the same budget priorities that White communities have already created for themselves: schooling > police,etc.

People asked in other ways, but were always told “No, how do you pay for it?”

So they found the line item.

​However, Edward Maguire, a professor of criminology and criminal justice at Arizona State University, deems that "the defunding campaign feels good" to some Americans as they have got very emotional amid the uprising.

"I just worry that they may not have thought through the details or the consequences of this campaign", the professor says, warning that "if we were to take the idea of defunding literally and make massive cuts to police agencies, there would be many unanticipated consequences that could worsen existing social problems".

A well-thought-out public safety reform could have become a viable alternative to defunding or dismantling the police, according to Maguire, who outlines four issues which a potential revision could include:

·         Challenging certain dysfunctional aspects of police culture and reducing the embrace of the warrior mentality.

·         Encouraging police officers to exert greater control over one another's behaviour, encouraging them to intervene when their peers make mistakes.

·         A fundamental restructuring of how police respond to crowd events, including protests and mass demonstrations.

To defund the police is a crazy way of dealing with the situation unfolding in the US right now, argues Chris Phillips, a former senior British police officer and managing director of IPPSO, stressing that societal inequality is the root of the problem and not the police.

Just a few weeks ago Bill DeBlasio was sending police officers into neighborhoods to break up religious gatherings.

Now, he wants to defund the NYPD.

​The reality is that people from ethnic minorities don't get the same advantages with poor black youths – often from single parent families and influenced by local gangs – having to deal with more difficult safety issues than white people, Phillips elaborates, adding that it is a fact that crime is higher within the black community.

What one sees in the US right now is that many of those "killed, injured, and maimed by out of control youths" belong to "the very same black communities that are supposed to be upset". Yet another example put forward by the former British officer is "a 77-year-old black ex-police officer who was trying to prevent a store being looted was murdered in cold blood".

Given that most murders and street crimes in the US, the UK, and across Europe are being committed by black youths on other black youths the idea to reduce police funding sounds absurd as "what's going to happen in those circumstances is that crime will quickly go out of control", according to the former police officer.

"There will always be instances of bad policing and quite rightly this must always come under scrutiny", Phillips underscores. "Police in the US have a terribly difficult job. Many people have guns, and those police officers are really taking a risk, when they deal with people, many police officers are killed each year… We are now seeing mass criminality. I think most societies in the world should bear in mind that this level of violence and crime are close to the surface and that it is only being held down, actually by good policing".

'Minneapolis May Offer a Model Other Cities Could Follow'

"Rather than defund the police, it would be preferable to reform the police and place funding in areas to improve training and performance of each officer", the retired police officer opines.

Lowe suggests that one of the potential improvements should ensure the safety of lives of those from racial, ethnic, and national minorities. According to him, the key to changes are not just in the accountability and transparency of police operations but also "in changing how officers approach and deal with situations". This, he continues, can be brought about through training and legislation related to police procedures and codes of practice.

"Policing must be seen not as a job but as a vocation where the primary duty is to serve and protect society from criminal and terrorist activity, and I have to state that most police officers do see their role as that", he highlights.

On the other hand, the retired officer deems that one should wait and see what new public safety model the Minneapolis City Council introduces. "It can be assumed this will include changes in senior management, accountability, transparency of operations and importantly, training to a higher degree", he suggests, adding that it may become "a model that other US city councils could follow as it is important that trust is restored in the police".

Biden Does Not Support Idea of Defunding Police, Campaign Says