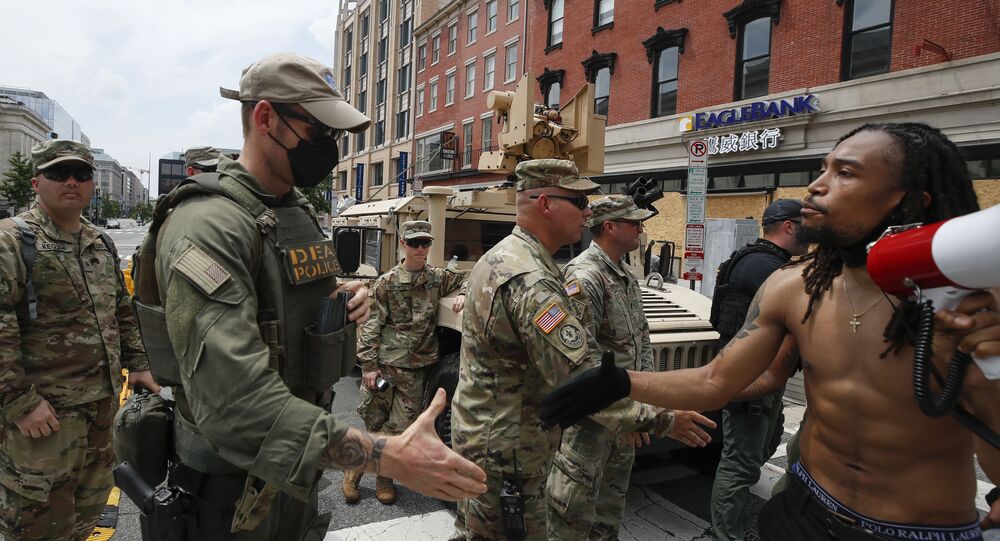 While the US Drug Enforcement Agency (DEA) has been conducting surveillance and collecting information on protesters in the wake of the police killing of George Floyd, web developer and technologist Chris Garaffa and technology and security analyst Patricia Gorky told Sputnik the agency has long peered into activists’ communications.

“William Barr - who’s attorney general, who we’ve talked about many times as an absolute enemy of privacy and civil liberties - last week put out a statement staying that because of ‘anarchistic and far-left extremists, using Antifa-like tactics,’ he was deploying the FBI, the DEA and others into DC and other cities to monitor and basically spy on protests and organizers,” Garaffa told Loud & Clear host John Kiriakou on Monday.

The memo, dated May 30, also states: “We must have law and order on our streets and in our communities, and it is the responsibility of the local and state leadership, in the first instance, to halt this violence. The Department of Justice (including the FBI, Marshals, ATF [The Bureau of Alcohol, Tobacco, Firearms and Explosives] and DEA), and all of our 93 US Attorneys across the country, will support these local efforts and take all action necessary to enforce federal law.”

However, according to Garaffa, it isn’t surprising that the DEA is spying on protesters: when Barr was previously attorney general between 1991 and 1993 under President George H. W. Bush, the agency was given “sweeping powers” by Bush to do what the New York Times referred to as “fishing expeditions.”

The DEA isn’t the only agency that has a history of surveilling protest groups, either. Following the death of Baltimore, Maryland, man Freddie Gray due to injuries he sustained in police custody, the Department of Homeland Security (DHS) monitored social media platforms to garner information on protesters. The FBI also monitored protesters during the 2011 Occupy Wall Street movement and mounted a sophisticated operation against leftist movements and socialist organizations called COINTELPRO in the 1950s through the 1970s.

The DEA monitors protesters using so-called stingrays, which the American Civil Liberties Union defines as “invasive cell phone surveillance devices that mimic cell phone towers and send out signals to trick cell phones in the area into transmitting their locations and identifying information.”

“The DEA, among other things, owns what are called stingrays. And they have deployed them not just on the ground, but in the past they have deployed them in planes,” Garaffa told Sputnik. “Some of these stingray devices have the ability to turn down the level of encryption that your phone is using when it’s talking to a cellphone tower. And with that, if they can break the weaker version of encryption, which it appears they can do, they actually could read your text messages or some other info that’s going through your phone,” they added.

“The DEA has worked with local authorities to access the country, to put surveillance cameras in road signs,” they continued.

According to Gorky, the DEA, which maintains presences around the world, tries to destabilize other nations.

“They’re actually international … The DEA has 91 foreign offices in 68 countries. What on Earth is this administration of the US doing across the world? It’s virtually on every continent except Antarctica … It's really this agency that’s there to destabilize countries, to actually flood weapons and support drug trafficking, as it has done across parts of Latin America,” Gorky noted.