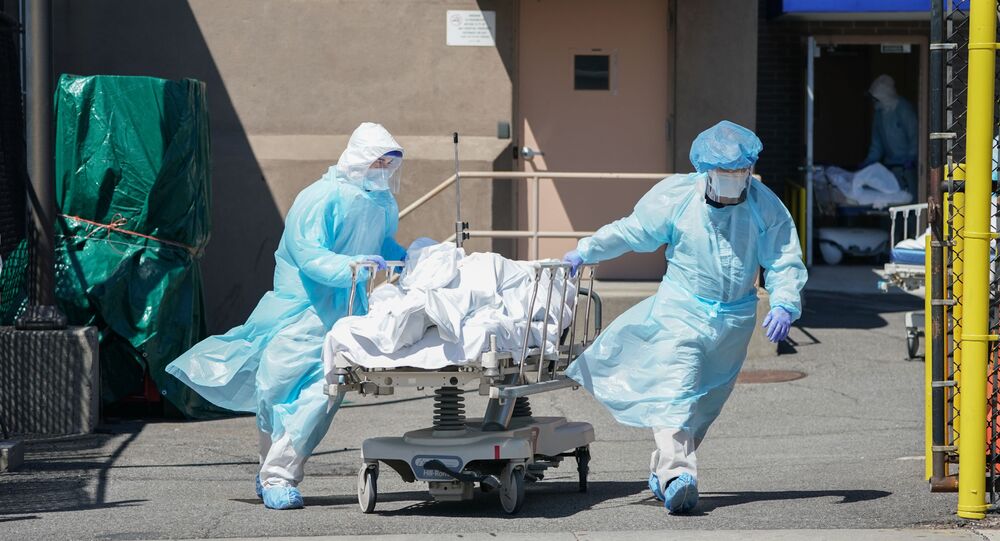 Government Communications Headquarters Director Jeremy Fleming said earlier this week that the NHS is being targeted by cyberattacks from Russia, China and Iran, which are aimed at getting access to sensitive data such as vaccine research in the UK.

London-based political consultant Adriel Kasonta explains what could be behind such allegations.

Sputnik: The GCHQ boss is warning that foreign actors are trying to steal information about Britain’s attempts to create a COVID-19 vaccine. Russia, China, and Iran are alleged to be behind efforts targeting laboratories researching coronavirus vaccines. How justified are these claims?

Adriel Kasonta: The accusations of Russia, China and Iran being allegedly behind efforts targeting laboratories in the U.K. regarding the creation of COVID-19 vaccine are ridiculous, but they shouldn't come as a surprise. We know that this three countries, as I've mentioned, Russia, China and Iran are the usual suspects on the list of the United Kingdom Secret Services GCHQ, as well as the same equivalence and the United States.

We have to bear in mind that the United Kingdom is using these three as boogiemen in order to disseminate their propaganda within the British public or American public minds in order to cover their faults and attempts to do the things that they are accusing other countries. We have to bear in mind that it was not long ago, it was in March this year where Donald Trump was trying to buy the company, a German company called a CureVac, buy the company and steal the knowhow from Germany in order to have the vaccines solely for the United States in order to sell it back to Europe and around the world. These accusations were confirmed by the spokesperson of the German health ministry. So these are not, you know, lies from my side or from some fake news, from dubious media outlets. But these are the facts. So calling some other countries for stealing the know-how of the vaccines is ridiculous.

Where the British side remains silent, where Donald Trump was trying to do the very thing that they are accusing now, Russia, China and Iran to do so. Also, we have to bear in mind that there are serious sanctions imposed on Russia and on Iran by the United States. And in the case of Iran, we have to bear in mind that due to a pandemic caused by COVID 19 virus, people are dying because they don't have access to medical equipment, to medicines. And I think that it is highly unethical and immoral from the British side to side with the United States when it comes to stealing the vaccine rhetoric. But we know that for a long time, the British government is in bed with "the Blob" in the United States.

So it shouldn't come as a surprise.

© REUTERS / Dado Ruvic
Small bottles labeled with a "Vaccine COVID-19" sticker and a medical syringe are seen in this illustration taken taken April 10, 2020

Sputnik: What can you say about the timing of this?

Adriel Kasonta: The timing is very specific because we know that in May, Chinese President Xi Jinping announced that if China will find a vaccine for the COVID 19, it will be redistributed or given to the world as a gift for free, which means that the neoliberal countries or the capitalistic countries that are driven by the logic of the market and strong competition, they have an incentive to somehow backstop countries like China from implementing the vaccine, which will be redistributed for free.

Because if the countries like the United Kingdom or the United States will find a vaccine first, they will hold the monopoly and they will try to sell it. So it is very clear in my perspective, from my point of view, that they want to, you know, find out the date, the vaccine and somehow backstop other countries and prevent them from giving something which can be monetised for free.

Sputnik: Why are we seeing such competition and division on the vaccine issue when countries should instead be cooperating and not competing?

Adriel Kasonta: When it comes to accusing and, you know, using China, Iran and Russia obviously as a bogeyman as I said at the very beginning, this competition is also driven by the fact that neither the United States nor the United Kingdom are willing to be equal partners with other international players, other countries. And instead of cooperating in finding out the solution which is needed around the world, because this problem of the COVID-19 virus has affected all societies around the world. So it should be in the ideal world, in the best interests of every single country to energise its best medical experts, the best minds to find the solutions to the common threat, which is the virus called COVID-19. Instead, we are seeing that even in the times of the pandemic, the times, which are disastrous for many people around the world, countries like the United Kingdom and the United States are trying to play the same song. This song is Me, Me, Me, so they are very selfish. They are not thinking in terms of having a global community and finding, you know, a common solution to the common threats.

They are thinking how to, first of all, be first, how to lead the world and be ahead of other countries, at the expense of other countries. As I've mentioned, Donald Trump's attempt to steal because it is a theft to buy a German company which was involved in creating or finding out the vaccine for Europeans and for German citizens. So it is disheartening, but it's just reassuring us that even the pandemic will not change the UK or US narrative when it comes to global competition. These countries are strongly interested in leading the world, in being ahead of other countries, even at the expense of the global population and our very own citizens.

It is just not only foolish, but it is just disrespectful, not only to these countries but to the same citizens in other countries who are watching and paying close attention, attention to what different players on the global chessboard are doing, especially during this time of the pandemic. It is disheartening and the United Kingdom, especially GCHQ boss, should be ashamed to use this sort of language when the entire world is just suffering, suffering from the pandemic. And I hope that perhaps they will one day come to their mind and come to the conclusion that cooperation is the best way to move forward in the multipolar world. And somehow the former hegemony or former global power like Britain, which has still many to offer to the world, because we have to bear in mind the British people are wonderful when it comes to the innovation, when it comes to our universities, to many different levels, or layers, I should say, of society's development.

But when it comes to the government and dubious tactics to prevent other countries from contributing meaningfully to the global good, it's not well-received by many citizens around the world.

And I think that if it wasn't a wise move from the GCHQ's boss to label this country, because we know that this is nothing, nothing more, but just a repetition of the McCarthyist sort of tactics to create a picture of these three countries as an axis of evil and the enemies to the British or to the western citizens, people who are living in the West. While we should see that people should seek cooperation and talk to each other rather than play in the stupid blame game led by the Donald Trump administration.