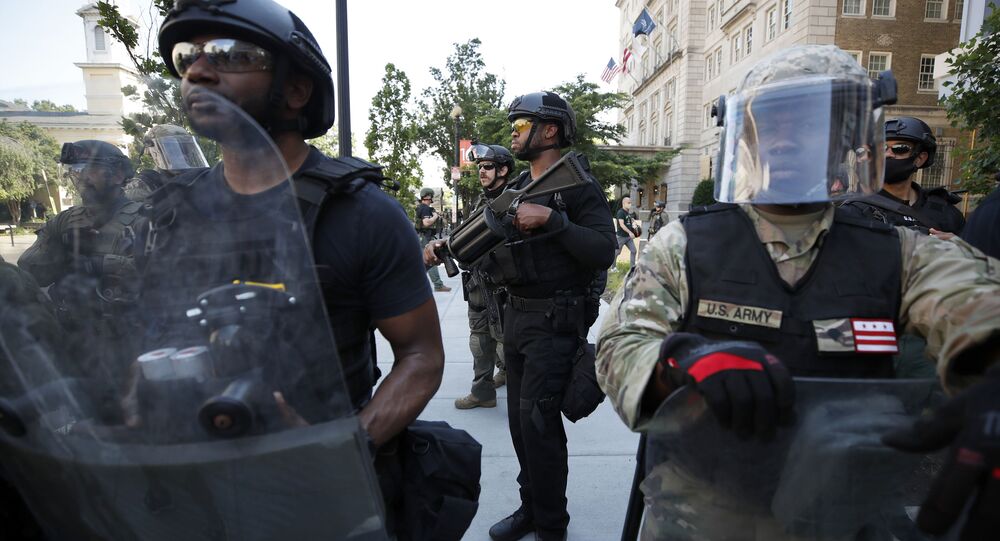 The US Justice Department on Wednesday sent Bureau of Prisons staff to Washington, DC, in response to the protests over the killing of George Floyd, setting a precedent for using prison employees for law enforcement outside of prisons, Paul Wright, the founder and executive of the Human Rights Defense Center, told Sputnik Thursday.

The officers were sent to DC to confront waves of protests regarding police brutality after the police killing of Floyd, an unarmed black man, in Minnesota last week.

“The fact that we now have prison employees literally policing the streets of our nation’s capital makes me wonder what is their legal authority or legal justification for doing it. It also seems to cast doubt upon the claims about how understaffed their prison supposedly is,” Wright added.

The law enforcement officials refused to identify which agency they worked for, Kevin Gosztola, a writer for Shadowproof.com and co-host of the podcast Unauthorized Disclosure, also told Loud & Clear Thursday.

“You saw in DC that there were these officers, these shock-troop looking people who showed up on the streets of DC - they looked like they were kind of military. There’s nothing on their uniform that indicates where they work … They refused to identify who they work for. I know one of the troopers told a person that they were with the Department of Justice, but they didn't describe any more detail,” Gosztola noted.

In addition to refusing to identify themselves, many law enforcement officials removed their insignias or taped over them so that they were unidentifiable.

In addition to Bureau of Prisons Crisis Management Teams, other forces patrolling the nation’s capital this week belonged to the US Secret Service, the Drug Enforcement Administration, the FBI, Park Police, the Bureau of Alcohol, Tobacco, Firearms and Explosives, US Marshals, Customs and Border Protection, the Federal Protective Service and the Transportation Security Administration. Additional fencing and barriers have also been placed around the White House.

While the protests began as a reaction to police brutality, it’s also important to highlight mass incarceration issues in the US, Wright pointed out.

“The bulk of the conversation that we’ve seen is about police brutality and policing practices and the use of force against citizens in this country, especially African Americans, but the reality is that the brutality part of it is part of the story. The caging of the 2.5 million people that are locked in a prison or jail cell on any given day in this country - that’s, I think, the bigger story,” Wright noted.

“Unfortunately, I think a lot of activists make a distinction between policing issues and prison issues and jail issues. But I think it’s all kind of a big continuum,” he added.

The Bureau of Prisons ordered a national lockdown this week to “ensure the good order and security of our institutions, as well as ensure the safety of staff and inmates,” the agency wrote in a statement Tuesday.

“Obviously the reason why they are putting these prisons on lockdown is because they saw what was happening in the streets, and they thought it would spread to prisoners. And I think that’s a valid prediction to make, because we’ve seen unprecedented prisoner resistance during the coronavirus pandemic,” Gosztola said.

“We’ve seen these strikes. We know that there are many grievances that prisoners would have. We know they would show solidarity with people on the outside. We know many prisoners would be in agreement with what people are fighting for in the streets, that they wouldn’t see their struggle as separate from what people are challenging as they demand justice for people who are being murdered by police,” he continued.

“And so, I think because they want to enforce order and control people - the prisoners - the Bureau of Prisons made a decision that they wanted to limit what prisoners were able to hear. They want to make sure that there’s the lowest amount of information about protests or about the rebellions that were happening across the country getting to these prisoners,” Gosztola noted.