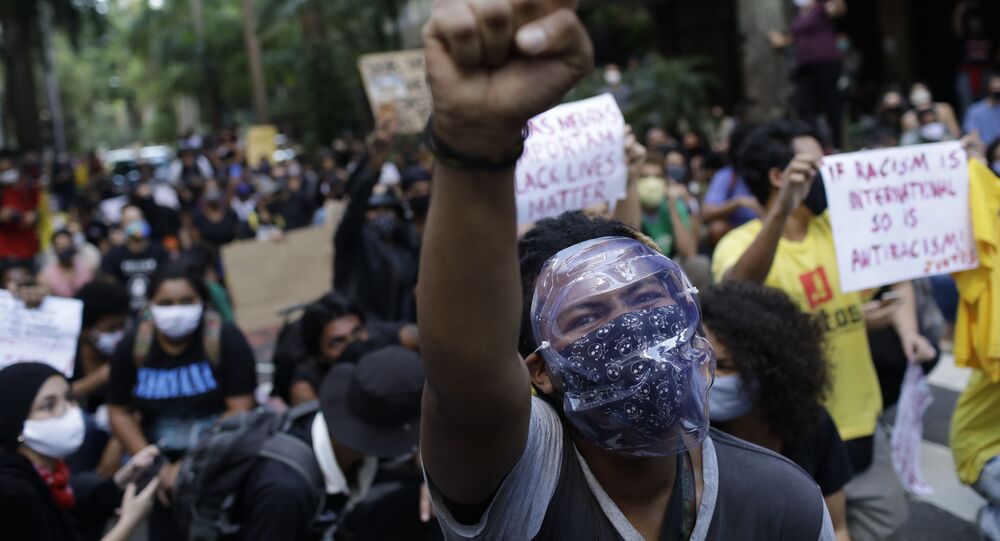 The George Floyd demonstrations quickly turned from peaceful protests to violent riots engulfing more than 140 cities amid a coronavirus-related recession and sharp spike in unemployment in the US. American clinical psychologist Erlanger Turner has explained what feeds the people's frustration and outrage.

As George Floyd protests entered their tenth day, over 10,000 people have been arrested, at least 13 have died and many more have been injured including both rioters and police officers. The nationwide mayhem in the US has coincided with the ongoing COVID-19 pandemic and resulting lockdowns, which have dealt a heavy blow to the country's economy. One might wonder whether the riots have come as a result of the quarantine fatigue.

'Rioting Isn't Something Unique' for the US

History shows that riots are often a predictable result of quarantines; in the US, there were protests and riots in the 1900s due to the smallpox isolation and more recently, in 2009, there were prison riots in Mexico which were sparked by the swine flu outbreak.

Still, the recent wave of protests over the killing of George Floyd, a 46-year old African American, appears to be less connected to COVID-19 and its associated stress, according to Erlanger Turner, a clinical psychologist and assistant professor of psychology at Pepperdine University.

"In my opinion, the reaction is strongly connected to repeated incidences of injustice and lack of accountability for law-enforcement’s behaviour towards racial and minoritised individuals in the United States", the professor, who studies mental health among racial communities, believes.

The psychologist's strong belief is that the African Americans' frustration and anger over "the amount of oppression that continues to be experienced" by them "has added to why people are beginning to protest".

"From a psychological perspective, people often express anger by responding with aggression to release their frustration", the expert explains. "Anger is a universal emotion and often is a psychological response to disappointment or threat. People’s lives are being threatened and their natural response is anger."

The protests started in Minneapolis on 26 May 2020, the day after the 46-year old African American died during the arrest. Police officer Derek Chauvin knelt on his neck for over eight minutes despite Floyd complained that he couldn't breathe, as a bystander's video widely shared on social media indicated.

It with a large degree of humility and a great seriousness, I accept for my office the responsibility for leadership on this critical case involving the killing of George Floyd.

We are going to bring to bear all the resources necessary to achieve justice in this case. pic.twitter.com/XXafzFT0Kd

Despite starting out as a peaceful movement, the demonstrations soon morphed into riots accompanied by clashes with police, arson attacks, and a looting spree.

"Over the last couple of days some have expressed disappointment in how some protest have turned into riots", Turner acknowledged, adding that rioting during George Floyd rallies is not something new or unique for US protest culture. "Over the course of US history, rioting has often resulted after the public feels that are not being heard or taken seriously."

To illustrate his point the psychologist looked back to the Boston Tea Party of 1773, a political protest launched by American colonists at Griffin's Wharf against Britain's new taxation rules.

"Americans were frustrated and angry due to taxation without representation and this resulted in protest and riot against British rule," he explains. "The Boston Tea party ultimately resulted in the changes to policies. I think for many people that are rioting their hope is that people in power will be able to see their pain."

Minnesota Attorney General Keith Ellison is increasing charges against Derek Chauvin to 2nd degree in George Floyd’s murder and also charging other 3 officers. This is another important step for justice.

​The protests strongly resemble the 2014 Ferguson unrest which followed the fatal shooting of Michael Brown, an 18-year-old African American, by police officer Darren Wilson. The nationwide protest became part of the Black Lives Matter movement triggered by the death of yet another African-American teen, Trayvon Martin, in February 2012.

BREAKING: New charges filed by Minnesota AG Keith Ellison vs Minneapolis cops involved in George Floyd's arrest put police on notice any future restraining of suspects who resist arrest,regardless of technique or use of force, can be viewed as felony "assault in the third degree"

​While Darren Wilson was twice exonerated of criminal wrongdoing, which sparked repeated waves of protests among the US African-American community, three Minneapolis police officers involved in Floyd’s deadly arrest face counts of aiding and abetting murder while Derek Chauvin's charges have been upgraded to second-degree murder. Now Chauvin, 44, may be sentenced to up to 40 years in prison, according to state statutes.