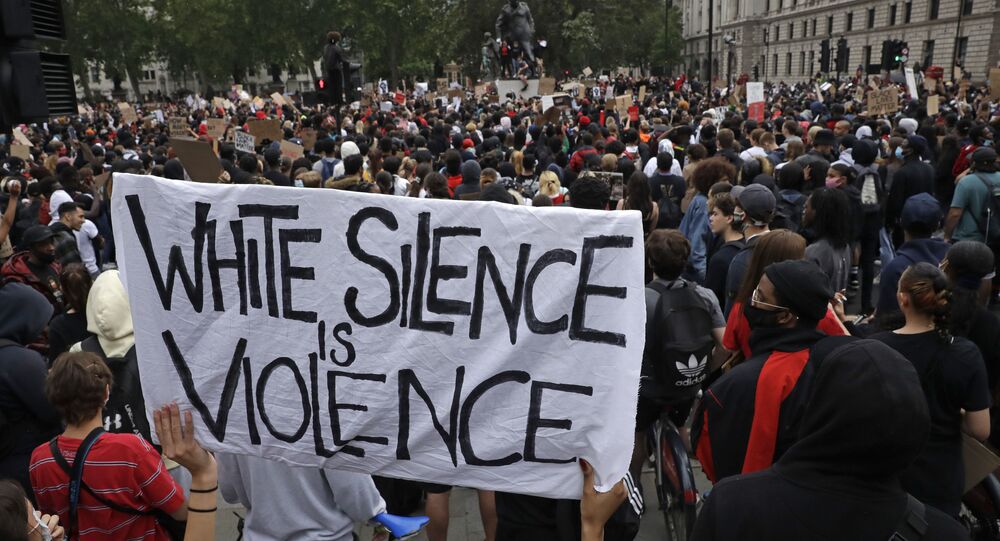 Thousands of protesters marched through central London Wednesday in a show of solidarity with US protesters demonstrating against police brutality following the killing of George Floyd and to condemn racism in their own country, journalist Mohamed Elmaazi told Radio Sputnik’s Political Misfits.

“I would say that a substantial number of them were black, Asian or other ethnic minority groups, but there were a lot of people who, I suppose, would be classified as white, and they had said, a number of them had said, that things have to change,” Elmaazi told host Jamarl Thomas about the Hyde Park protesters. “They’re there opposing violence and racism from the police.”

“Part of it is solidarity … another part of it is a sense of identification with the US … a great number of the populations will, you know, look to the US in terms of hope, in terms of possible change, positive change, but also in terms of negative things that are happening. It is the single most powerful country on the planet. It is very influential,” Elmazi explained.

“If there’s somebody who's middle class who says, ‘I know this happened,’ their testimony is much more likely to be trusted. And if that person is white, it goes a hell of a lot further. That’s unfortunate, but that’s just sort of the reality,” Elmazi continued, also noting that people in the UK are not only treated differently by police because of their race but also because of their class.

The London protesters, most of whom were under 30, chanted “No justice, no peace, no racist police,” “I can’t breathe” and “The UK is not innocent.” Many of them chanted the names of Floyd and Mark Duggan, a 29-year-old British man who was shot dead by the country’s Metropolitan Police Service in Tottenham, North London, in 2011.

“It’s been admitted now, even by the Metropolitan Police force, that between the 1960s and 2014, which was the most recent date that we have, they have spied upon and infiltrated over 1,000 organizations here - lawful organizations,” Elmazi explained.

An analysis completed by crime science professor Dr. Krisztián Pósch and released by the Guardian Wednesday shows that the Metropolitan Police is twice as likely to issue fines to black people compared to white people when enforcing COVID-19 lockdown measures.

“Compared to their share of the population, people from a black ethnic minority were 2.17 times more likely to receive a fine and Asians around 26% more likely. In comparison, whites were 23% less likely to be fined,” Pósch, a professor at University College London, told the Guardian.

In addition to the UK, mass demonstrations against police brutality and racism over Floyd's death have taken place in many other countries across the world, including Greece, Germany, Canada and France.