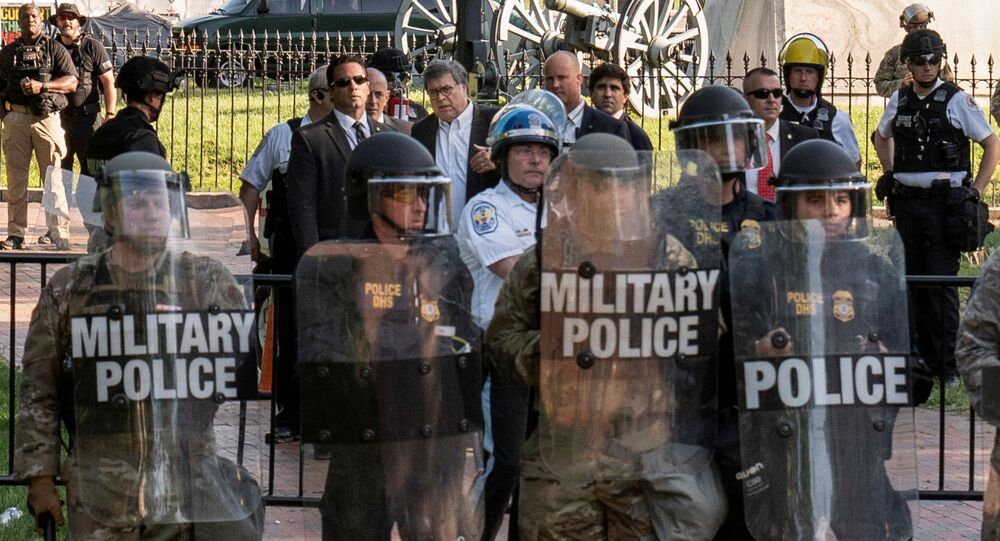 New Delhi (Sputnik): The killing of an African American, George Floyd, by a white policeman in Minneapolis has roiled the United States, with nationwide protests and violence over the past week. Some governors have refused to use the National Guard to shut the protests down, so President Trump has promised to deploy the military to end the unrest.

Nationwide protests erupted in the US after a video emerged online, showing George Floyd, an unarmed African American man, pinned to the ground by Minneapolis police officer Derek Chauvin, who held a knee to the man's neck for several minutes until he became unresponsive and later died at a local hospital.

All four officers involved were fired, while Chauvin has now been charged with third-degree murder and manslaughter.

A Pennsylvania-based political analyst says that police brutality in the United States is the result of its militarisation, leading to their crisis mentality and approach to citizens as enemies.

“Police in America have come to be equipped and trained like military units. Their tactics like SWAT raids, lasers, heavy uniforms, tactical training, all contribute to a crisis mentality. They do not approach people as citizens but as enemies", Krishna Jayakar, a professor at Pennsylvania State University tells Sputnik, suggesting American police need drastic reforms.

Another reason for the high-handedness of the police force in the US, according to Jayakar, is class, "police personnel are drawn mostly from the working class. They are white, but only marginally better off than black people. For them, the only way to gain self respect is by imagining someone even below them".

Jayakar clarifies that crimes against African American people have not increased, it has always been there, "but we see more because everyone has cell phone cameras now".

A third reason for violence against people of colour, as suggested by Jayakar, is the long history of stereotyping black people, especially men, as violent and uncontrollable.

© REUTERS / Tom Brenner
Videos: Trump Leaves White House on Foot as Military Police Clash With Protesters in Nearby Park
“This stereotyping was at the foundation of slavery. It justified slavery since black people were somehow subhuman and needed to be controlled”, Jayakar opines.

For her part, Harinder Sekhon, of the New Delhi-based think-tank Vivekananda International Foundation, thinks that US President Donald Trump is perceived by many as a divisive factor.

“His habit of running the administration through tweets, his tweets against immigrants, America first sometimes very spontaneous, did not go well and also created a sense of fear in American society", she elucidates.

Sekhon, however, says, there is no reason to believe that the American system has collapsed, as Trump has himself said such incidents are unacceptable, while many governors have come out in support of taking action against the officers involved in Floyd's death.

The demonstrations triggered by the police killing of Floyd have been largely peaceful, but in some places police used force against protesters - especially when some turned to looting, arson, and vandalism.

Floyd was detained in Minneapolis last Monday over allegedly paying for cigarettes with a counterfeit bill. During the arrest, a white police officer, Derek Chauvin, was seen pressing his knee on Floyd's neck for nearly 10 minutes, until the man was unresponsive.

The Hennepin County Medical Examiner in the US state of Minnesota ruled earlier that Floyd's death while in police custody was a homicide.

The four police officers present during the incident were later fired. Derek Chauvin has since been charged with third-degree murder and manslaughter.