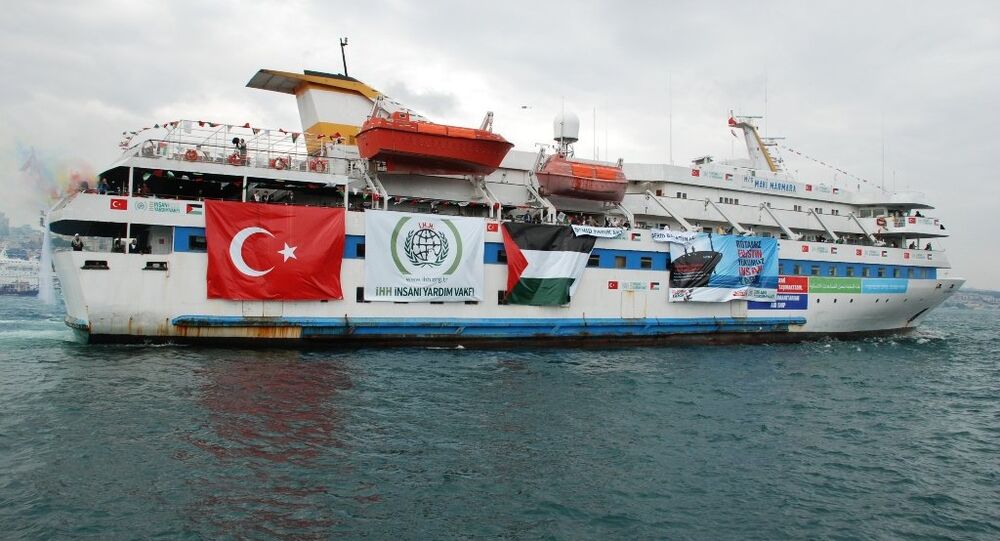 Although Israel later apologised for the incident that claimed the lives of nine Turkish nationals and one American and compensated the victims' families, Tel Aviv-Ankara ties have never been able to get back on track, and doubts run high as to whether they can ever be repaired.

It was an operation by the Israeli Navy that widened the abyss between Tel Aviv and Ankara. Ten years ago, on 31 May, Israeli naval commandos boarded six civilian ships – carrying goods, school supplies, and building materials to Gaza – in an attempt to stop the vessels from reaching their destination, after earlier requests to reroute them fell on deaf ears.

They met no resistance until they boarded one ship, the Mavi Marmara, where 40 out of the 590 passengers clashed with the Israeli forces, reportedly using iron bars and knives. During that struggle, nine activists were killed, while another eventually succumbed to his injuries two years later. Ten Israeli soldiers were also hurt in the process.

For Alon Liel, Israel's former ambassador to Turkey, who at the time of the raid served as the director general of the country's Ministry of Foreign Affairs, Tel Aviv's conduct was a fatal mistake that "left deep scars".

"Never in our history of relations did we have such a direct confrontation with one another. We could have done approximately everything differently in handling that incident. It wasn't a Turkish invasion, all they wanted was to attract attention to [the situation] in Gaza and that incident should have been treated this way. But when you take the best unit of your army and you send it to fight civilians, this is where it gets problematic".

The damage was irreparable. Although relations between the two had soured long before Mavi Marmara, the raid in international waters was the final nail in the coffin of ties between Tel Aviv and Ankara.

Ankara expelled Israel's ambassador, demanded an apology, and compensation for the families of those killed during the raid. In addition, two years after the incident, Turkey also issued arrest warrants for four former IDF officers who were involved in the incident with the intention to indict them over the deaths of the nine activists. The four were later tried in absentia.

But for Pinhas Avivi, another former ambassador to Turkey, Mavi Marmara wasn't what triggered the deterioration in relations. The root of all the problems, says the ex-diplomat, was Turkish President Recep Tayyep Erodgan's desire to pose as a defender of the Palestinians, something that Tel Aviv could never accept.

"Erdogan has been trying to position himself as the leader of the Muslim world but he was competing against Saudi Arabia [home to Islam's two holiest sites – ed.] and Egypt who has been considered as political leader. That's why he sent the vessels to attract attention and to show the world that he is the only one standing up for the Palestinian people", he said, adding that the Turkish move was nothing more than a "provocation".

"Had Erdogan wanted to help the Palestinians, he could have found other ways to do so", Avivi added.

One such opportunity arose in 2005, when business groups from Israel, Turkey, and the Palestinian Authority established the Ankara Forum aimed at reopening the Eraz Industrial Zone in Gaza under Turkish management. The idea was that it would provide Palestinians with jobs, thus improving the dire economic situation that has gripped the Strip since 2007, when Hamas, regarded as a terrorist group by Israel, seized control over the enclave, prompting Tel Aviv to impose a blockade on the area.

When that initiative failed, Ankara started looking for other ways to help the Palestinians, including using a state-run body called the Turkish Cooperation and Coordination Agency, operational since 2005, to carry out hundreds of projects in Gaza, Jerusalem, and the West Bank.

Although Tel Aviv has never embraced that activity, largely turning a blind eye to Turkey's actions, the flotilla sent by Ankara in May 2010 was a red line, primarily because it dared to challenge Israel without its consent.

"When you make a mistake, you have to pay for it and we did", said Avivi, referring to the $20 million in compensation paid to the victims' families.

However, for Liel that too was a mistake, "especially when you look at the outcome". In Israel, Prime Minister Benjamin Netanyahu's apology was considered a sign of weakness, for which he was slammed by the country's right-wing circles. In Turkey, the compensation and the public humiliation of Israel was not enough to thaw the ice.

While in the 1990s, Israel and Turkey pursued close ties in defence projects, with Israeli companies offering technology that Ankara eagerly bought, this cooperation came to an end following the incident. Military agreements were suspended, deals were called off.

The exchange of tourists was also dealt a severe blow. If in 2008 more than half a million Israelis visited Turkey, in 2010 that number barely reached 80,000.

Surprisingly, however, trade only increased: in the first half of 2011, Israeli-Turkish trade rose by 26 percent reaching $2 billion, compared to $1.59 billion during the same period in 2010. Successive years have only seen this tendency increase, reaching $4.1 billion in 2017.

"Private trade can go on but our political relations which have been damaged so badly will not be repaired, certainly not if Israel goes ahead with its annexation plan", said Liel.

Israel plans to vote on a bill at the beginning of July that intends to bite off some 30 percent of the predominantly Palestinian West Bank. Turkey, as well as a number of European states, considers the move illegal. Tel Aviv and Washington are determined to implement this plan regardless of international pressure.

"Israel's current foreign minister [Gabbi Ashkenazi, who served as the chief of staff at the time of the raid – ed.] is one of those four generals who were wanted in Turkey in connection with Mavi Marmara. I doubt Turkish officials congratulated him on getting the foreign minister job and I doubt that if the current government goes ahead with the annexation plan [of which he will be a part], they will pat him on the shoulder. If it does happen, I don’t see any possibility of recovery".