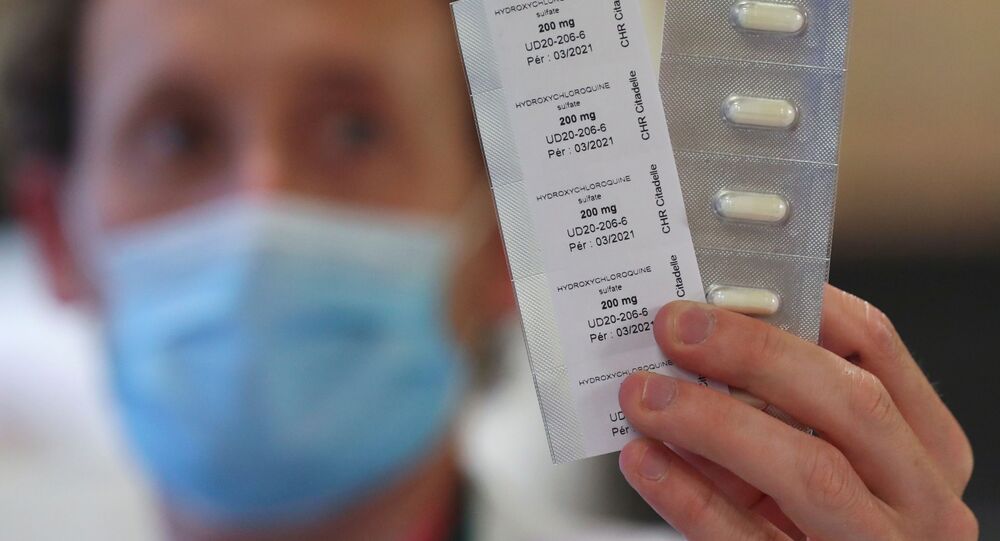 The French government's decision to ban anti-malaria drug hydroxychloroquine for use in COVID-19 cases goes against French people's interests and rights to get an inexpensive and effective medicine to treat coronavirus, suggests Nicolas Dupont-Aignan, the leader of Debout la France party.

The French government has revoked a decree authorising the use of hydroxychloroquine to treat COVID-19 patients two days after the World Health Organisation (WHO) halted clinical trials of the drug citing potentially dangerous side effects which overweigh the supposed benefits.

The country's health officials approved prescribing the anti-malarial drug, in some coronavirus cases, in late March 2020, when a study by microbiologist Didier Raoult suggested that a combination of hydroxychloroquine and azithromycin would be efficient in fighting COVID-19. However, the recent research by The Lancet has found that the medicine in question could also cause cardiac toxicity especially if administered with azithromycin.

"This is a real state scandal", says Nicolas Dupont-Aignan, the leader of the conservative party Debout la France. "The French government, because of stupidity or corruption, refuses French citizens treatment with hydroxychloroquine, which can save lives. And I think that the French will soon be outraged, because today this treatment is effective in many countries throughout the world".

According to Dupont-Aignan, this particular decision was made by the French authorities under pressure from pharmaceutical labs or vaccine advocates who are looking forward to earning billions if no other therapeutic regimen proves effective.

"Professor Raoul and his treatment regimen is like a little pebble in the boot of large pharmaceutical labs", the politician opines.

Dupont-Aignan hails Donald Trump's decision to withdraw financing from the WHO, arguing that the international entity is being influenced by China far more than the United States.

Previously, the US president, who has long touted hydroxychloroquine as a potent drug against COVID-19 and even said he was taking doses of both hydroxychloroquine and zinc, temporary suspended funding of the WHO. On 19 May, Trump threatened to halt the financing permanently and reconsider the US membership in the organisation if it does not "commit to major substantive improvements in the next 30 days".

"The WHO is influenced by pharmaceutical labs; it has lost credibility", Dupont-Aignan insists. "The Lancet published a study – fabricated, not true – whose authors want to convince [people] that prescribing chloroquine is dangerous, that it is cardiotoxic… And we can clearly see the shadow of laboratories that want to sell us more expensive drugs or a hypothetical vaccine behind this fight against chloroquine, an inexpensive (almost free) medicine that could save hundreds of thousands of lives".

'Doctor is Free to Prescribe Drugs Suitable for Patient'

However, hydroxychloroquine is not the only drug being used worldwide to support patients suffering from COVID: some health officials have instrumentalised the plasma of Covid-19 survivors and interferon therapy to treat patients at the initial stage.

"I don’t advocate chloroquine’s monopoly", the French politician explains. "I never insisted on its widespread use. In accordance with the French law of 1921, doctors can prescribe drugs depending on the specific case".

According to him, the problem is that the French government "seeks to impose official medicine".

"I would only welcome other treatments", Dupont-Aignan emphasises. "I don’t advocate chloroquine, but a principled stance. I’m against banning a drug that has proven effective. The doctor is free to consciously prescribe or not prescribe a drug they consider necessary and suitable for the patient. Moreover, for over 70 years, chloroquine has been on the open market in our country. This is not a new drug. It has no contraindications. It just needs to be prescribed reasonably, and that is what doctors should do".