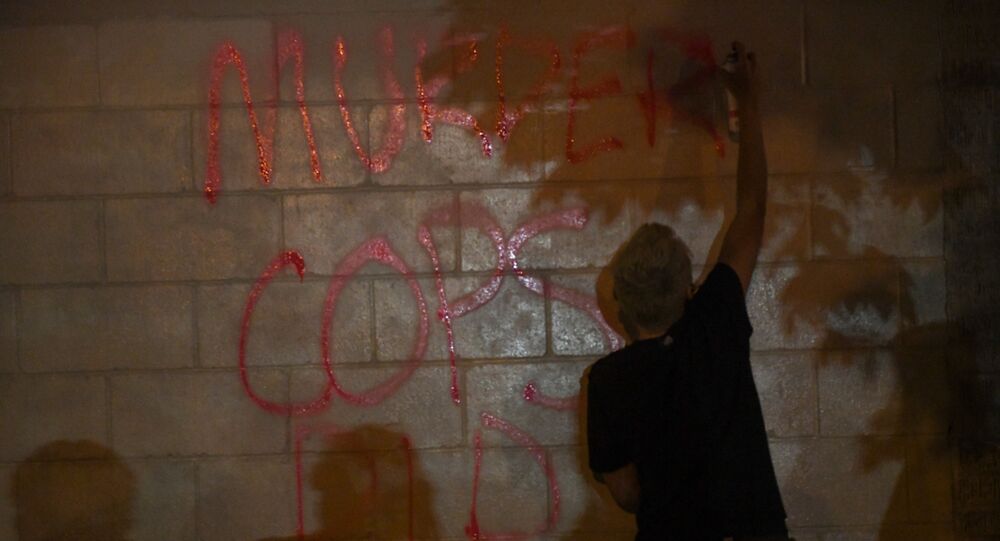 Protests are expected to continue in Minneapolis after an African American man died after a brutal arrest by a police officer in the street. US President Donald Trump has requested an investigation into the tragic incident, pledging that "justice will be served".

Sputnik: This is not the first time protests have been launched in the US over police aggression against unarmed people. What is the reason some police officers resort to these tactics?

Steven Howard: It’s been since 9/11. Police are more militarised, they use lots of military equipment and weapons - and the attitude that goes with these weapons. These days, this happens everywhere, basically - if you don’t just jump into the handcuffs and jump in their car and say ‘yes sir’ or ‘no sir’ the whole time; if you curse them, or spit on them, or something like that, their first response is to slam you into the ground as hard as they can and then put their knee on your head or on your neck, which is very painful, to, as they say, “adjust your attitude”. They aren’t supposed to do this, but they do it anyway. Because they know that the worst that will happen is that they lose their job. We had this guy in South Carolina that shot a man in the back for running away. Why do these cops do this? Because they are comfortable doing it. They know that their bosses will protect them, because their bosses don’t want to get sued. And the only time that anything bad happens to them - is if there is a videotape of them, which there is, in this case. Because otherwise all they have to do is to say, as they did in this case, that ‘he was resisting arrest; what I did was reasonable and necessary’. And at first, it’s the man who was arrested’s questionable word against the god-like truthfulness and authority of the police officers. But this time, they did it in front of a whole bunch of people with their phones; with cameras. So this is very standard practice in this country, especially in a big city.

Sputnik: What can be done by local authorities and the federal government to resolve this situation, with the issues you’ve highlighted?

Steven Howard: Prosecute them. All the civilian can do is sue and then get money. That really doesn’t bother the officers, because many times they turn the lawsuits around and get promoted. And I’ve worked cases where we’ve seen police officers shooting people in the back who were unarmed and didn’t do anything, and by the time the lawsuit’s over, they’ve been promoted. But, if the federal government, especially, who has the authority, could sue these people for violating their rights and they go to prison, then maybe they start saying ‘wait a minute, maybe I didn’t behave myself’. Again, why do these people do it? Because they are comfortable doing it. They know they’ll be protected. They know that their boss will protect them. Because their boss doesn’t want to get sued. And once they do it and are protected and those around them are protected, this sends them a message – ‘it’s okay to do this. The boss will protect you.’ So they get very comfortable doing it and they just do it all the time.

© REUTERS / ERIC MILLER
People gather near the Minneapolis Police third precinct after a white police officer was caught on a bystander's video pressing his knee into the neck of African-American man George Floyd, who later died at a hospital, in Minneapolis, Minnesota, U.S. May 27, 2020.

Sputnik: We have seen before that situations like this portray a certain image of the police force in the US with many branding them as racists and pushing forward a certain stereotype about police officers. What consequences have already arisen from this? What others can we expect to see?

Steven Howard: What the civilian can do is basically nothing except sue for money. They can complain to internal affairs. But internal affairs, who are supposed to be the ones who investigate these claims of brutality and excessive force - it’s clearly their job to fire officers who misbehave and prosecute them if it’s warranted. But the reality is that internal affairs’ sole mission is to protect the department from lawsuits. I caught an officer lying in court, which is a crime, and I took all the documented evidence, including tape recordings as well as trial transcripts, to the internal affairs of Lansing, Michigan, and to the chief of police. Internal affairs brought me into their office and asked me - I think it was one question - and then spent the next hour trying to convince me I was wrong. Things really didn’t happen the way that I could clearly see it did. They tried to convince me that I was wrong. So what they're doing is clearly protecting the department from lawsuits. And I realised very quickly that nothing was going to be done. So the next time it happened I made up my mind that I was going to go to the newspapers and the press and see what I could do about getting the police officers embarrassed, and getting the police and the mayor embarrassed and then maybe something would happen there. But I haven't had a chance to do that yet.

One thought about the officer who shot the guy for running away. What do you think he would have done to the kid, and I understand he was relatively young, he was 17 or 18, who was in the bushes on the other side of the fence filming him shooting the guy in the back? What do you think he would've done to him if he had seen that he was being filmed? He very certainly would have killed him. I mean he was willing to kill a guy just for running away; he would certainly kill somebody to protect his own life and his own job. And the guy who took the photographs did everything right.

You see, he didn’t go to the city police or internal affairs, because they’d quickly lose the evidence and say, well, nothing really bad happened, it was justified. No, he went directly to the press. And they put it out all over the TV, and the internet, and then the damage is done. They can’t hide from it anymore. And the chief of police sat up there and was crying, and saying, ‘well it did look sort of excessive to me…’ -You know what he was crying for? He was crying because that was the end of his career. That he was not going to be chief of police anymore, because this happened on his watch. And this is just more of the same, only no gun was involved. These cops - they don’t care if they hurt people, because they know they’ll get away with it. And only when they start going to jail are they going to start acting like human beings.

Were they surprised that someone showed up with a camera? They shouldn’t be surprised. Police wonder why people don’t trust them, why people don't come forward and tell them what happened. Nobody wants to volunteer information. Nobody wants to help them with anything. Because they are not nice people. They are so comfortable with this kind of violence, they just don’t see it as wrong, at all. And in their minds, they are just doing their jobs.