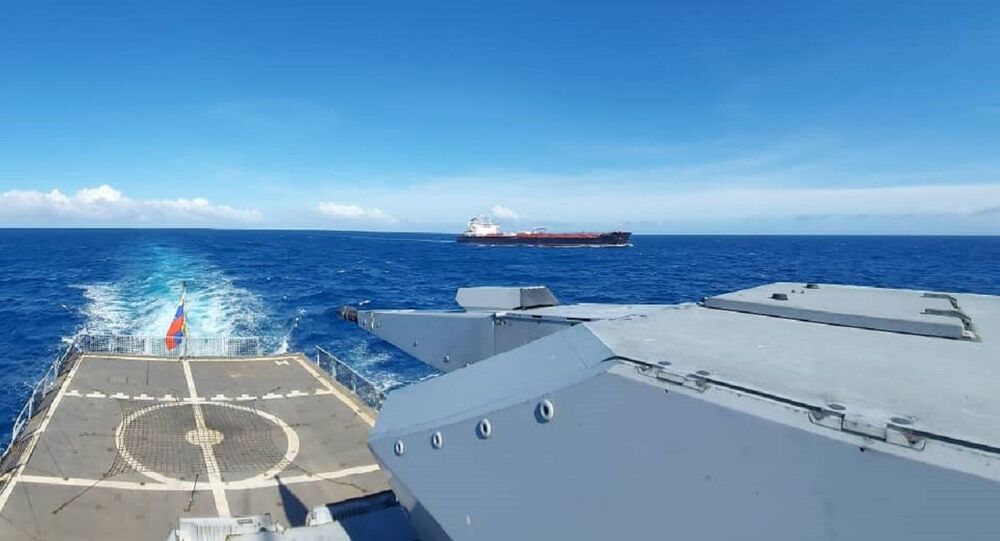 The first three of five Iranian gasoline tankers have arrived in Venezuela, representing a deepening solidarity between two countries that both face crippling US sanctions, an Iranian US expert told Radio Sputnik Wednesday. He compared it to the pivotal 1956 Suez crisis, which exposed the extent of Franco-British imperial decline.

The Iran-flagged oil tanker Petunia joined the tankers Fortune and Forest in Venezuelan waters on Tuesday, as two more tankers, the Clavel and Faxon, are expected to arrive by June 1. Together they carry roughly 1.5 million barrels of refined petroleum to help alleviate an acute gas shortage in Venezuela caused by the breakdown of the country’s largest oil refinery.

“I think the fuel ships that went to Venezuela were both very important because they were carrying badly-needed fuel for people there,”  Mohammad Marandi, an expert on American studies and postcolonial literature who teaches at the University of Tehran, told Loud & Clear host Brian Becker.

“The situation was very bad, and the sanctions that the Americans had imposed and the intimidating policies that they pursued prevented others from taking this fuel. But in addition to the fuel the Iranians had sent and are sending, a large amount of equipment as well as chemicals [are being sent] to help restart the different refineries in the country as well as power plants, so that the people of Venezuela can get their economy up and running again,” he said.

“There are also Iranian engineers there to help the Venezuelans get this done. So it is important, because the people of Venezuela need fuel, like any other nation on this planet, and you recall that the Americans did the same thing with Syria. The American government and the Europeans, they have been trying to block Syrians from obtaining fuel,” Marandi added

“And of course, as usual, they say all of this is for the sake of human rights, but they try to starve nations, they try to create suffering in nations, and the media - the corporate media, the mainstream media, the state media, the public media - in Western countries pretend that is all true,” the academic said. “So, the suffering and the deaths are of zero consequence to them when it comes to countries like Venezuela or Syria or any other country that, for any reason, has a problem with the US.”

In a televised address on Monday, Venezuelan President Nicolas Maduro said that he and his Iranian counterparts reject “North American imperialism.”

“We are two rebel revolutionary peoples that are never going to kneel before North American imperialism,” Maduro said, the Wall Street Journal reported.

The oil trading between Iran and Venezuela signifies a strong sense of solidarity among the two countries, Marandi pointed out.

“There is obviously economics. There is also the issue of helping countries like Iran to be able to resist the empire … I think the issue of solidarity, supporting the oppressed, is, as I said, very strong in Iranian culture and political culture,” he noted.

“If it was one ship or two ships, you could interpret the whole operation differently, but to send five big fuel tankers, one after another, toward Venezuela is sending a message to the US … Of course, under ordinary circumstances, it shouldn’t be a problem; it’s just trade. There’s nothing to complain about, but this is an extraordinary situation, because the US government now is behaving more like an imperial power than perhaps any other country in human history,” Marandi explained.

Despite having the largest oil reserves in the world and the capacity to refine some 1.3 million barrels of oil per day, Venezuela’s oil sector has been hit by crushing US sanctions and asset seizures, which have reduced production capacity and caused a gasoline deficit across the country. The US has imposed sanctions on the South American country for over a decade; however, sanctions have been expanded greatly in recent months in an attempt to strangle the Maduro administration.

The US has also long targeted Iran through sanctions over its nuclear activity, and the Trump administration has taken a “maximum pressure” stance against Tehran, causing many Iranians to experience even greater economic hardships.

As the US continues to strain its relationships with many global powers, it may be approaching a so-called “Suez moment,” Marandi noted.

“I think we are approaching what they often call a ‘Suez’ moment. And the Suez moment is when the British and the French, they tried to reassert their global power by invading Egypt, and it failed. And it was after the Second World War, and it was after that, basically it was acknowledged that the power had been transferred to the US. And I think that the American government’s behavior now, with regards to Venezuela, Iran and the world by antagonizing China and Russia - nowadays everyone is the enemy - I think this is reflective of something that is happening inside the US more than that’s going on outside the country,” Marandi explained.

Number of Those Injured in Earthquake in Southwestern Iran Reaches 16, Medical Service Says