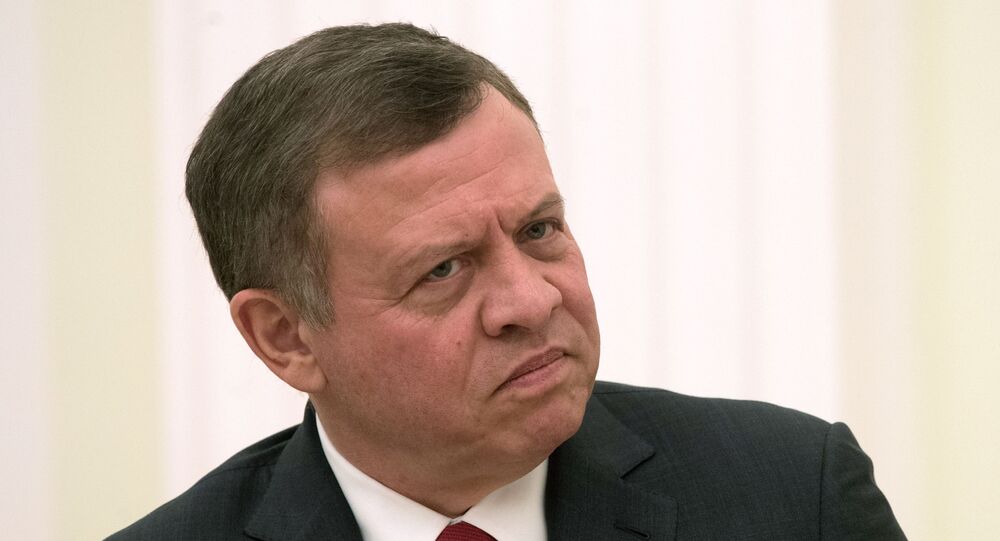 Righting the Wrong: Jordanian Parliamentarians Back Their King, Call to End Peace with Israel

Jordanian parliamentarians say all options are on the table, including the cancellation of the historic pact, if Israel goes ahead with its decision to extend its sovereignty to parts of the West Bank which are considered Palestinian land by international law.

During his first cabinet meeting since the new 35th Israeli government was sworn in, Prime Minister Benjamin Netanyahu said Sunday he had no intention to deviate from his original plan to extend Israeli sovereignty over some parts of the West Bank, considered Palestinian lands by international law.

The bill that presupposes biting off the Jordan Valley with its more than 65 thousand Palestinians is expected to reach the desks of Israeli parliamentarians on July 1, a date when they are expected to vote on the proposition.

The plan has already stirred an uproar among the Palestinian leadership, which has announced it has stopped all security cooperation with the Jewish state.

Jordan to the Rescue

But they were not alone. Jordan, with its large Palestinian population, was fuming too. Several days ago, the country's leader King Abdallah II said that Israel's plans would lead to a "massive conflict with Jordan" with him considering "all options" to punish Tel Aviv if it ever goes ahead with the move.

One of such options could be the cancellation of the Israel-Jordan peace treaty signed in 1994 after a long and a laborious negotiation process. While the Israeli press has already mulled over the idea, saying such a move would be "unlawful", Jordanian parliamentarians from all walks of the political spectrum seem to be backing the King.

Dima Dahboub, a member of Jordan's Islamic Action Front party, which affiliates itself with the country's Muslim Brotherhood movement, said she viewed the King's comments "positively" because "with such Zionist recklessness you need to be firm in confronting them".

For Dahboub, who believes in the liberation of all Palestinian territories "from the river to the sea" and the establishment of an independent Palestinian state, the peace treaty with Israel was wrong from the first place but Tel Aviv's recent actions have only made matters worse, leading to the demand of many in the Jordanian parliament to urge the monarch to call the pact off.

"There is no partner now, as the far right and fundamentalism are on the rise .in Israel," she said referring to the newly formed Israeli government comprising of Netanyahu's hawkish Likud party and Benny Gantz's centrist Blue and White list, that also includes representatives of Israel's right-wing camp. "It is because of Israel's actions that the peace agreement is coming to an end," she added.

Her comments resonated with another MP. Kais Khalil Zayadin, a young lawyer who initially enrolled into the parliament with the youth party Maan, said "Israel doesn't want peace" and expressed his hope that Jordan would eventually cancel its peace agreement with Tel Aviv.

Similar views have also been expressed by Nabil Gaishan, another member of the Jordanian House of Representatives. "What Israel is doing today is finalising the closing ceremony of the Zionist expansionist colonial project that plans to expand its activity eastwards," he said, adding that the peace agreement between the two countries has never been "real" given the fact that "Tel Aviv has always transgressed the treaty and rejected the principle of the two-state solution."

Their comments are not surprising; they reflect the general mood of the Jordanian public. Since it was signed in the mid-1990s, the peace treaty has never been popular among Jordanians, with many considering it illegitimate and calling on their monarch to freeze relations with the Jewish state. The West Bank was formally part of Jordan until 1967, when it was occupied by Israel during the 6-Day War.

In 2019, when the two countries marked 25 years since the historic agreement was reached, a survey found that 70 percent of the Jordanian public wanted the kingdom to limit their ties with Israel, a stark increase from a poll conducted in 2011 and that revealed that 52 percent of respondents wanted to see the peace agreement annulled. Jordan and Egypt are the only countries in the Arab world that recognise Israeli statehood.

For Jordan to take such a dramatic move, it will need to consider the repercussions that might follow, the primary of which is domestic security.

In the 70s and 80s, Jordan and Israel cooperated militarily in a bid to foil the plots of the Black September, a group of Palestinian militants, that challenged Jordan by launching attacks on Israel from Jordanian soil, prompting the Jewish state to respond with an iron fist. Although now a distant memory, the threat of insurgency that might follow if the treaty is called off continues to influence decision-making circles in Jordan.

For Zayadin, however, these allegations are groundless. "Israel will be the one to lose from the lack of a peace treaty with Jordan. It is us that thwart the threat of terror in the region," he stated, alluding to a recent attempt of Daesh terrorists to launch an attack on US and Israeli targets.

But regional stability is far from being the only repercussion of an annulled peace treaty. Potential American sanctions pose a threat too.

Previously, US President Donald Trump has tried applying pressure to force its agenda on a number of states, including imposing sanctions on Iran to curb its nuclear programme and on Lebanese firms to limit Hezbollah's finances; and fears run high he might do the same in Jordan.

"Jordan doesn't want any problems with President Trump," said Gaishan, referring to Washington's $1.7 billion in annual financial assistance, "but the political, moral, and religious costs that Jordan would pay if it swallowed the Israeli move would be far greater than the risks posed by Trump's anger".

Dahboub agreed with his statements, saying that any sanctions of the US administration would be illegitimate and added that Amman cannot be threatened, especially considering its strong economic base and its tight ties with Arab countries and the international community.

"Why should the US impose sanctions on Jordan while it didn't breach any agreements?" She asked and answered her own question - "because of Washington's bias towards the Jewish state", she said, referring to Trump's decision to move the US embassy from Tel Aviv to Jerusalem and -- a year later -- to recognise the legality of the West Bank's Jewish settlements.

It was for this reason that Palestinians, and now Jordanians, have decided to seek luck elsewhere, calling on the international community to take action.
Irrespective of the Jordanian calls, the European Union has already interfered putting pressure on Israel and warning of dire repercussions if it went ahead with its policy. But Zayadin felt that more could still be done.

"What the EU is doing is highly appreciated, but other countries, including Russia and China, should also put pressure on Israel. The entire world should form a joint front aimed at protecting the Palestinian people and preventing a situation where regional stability could be jeopardised."