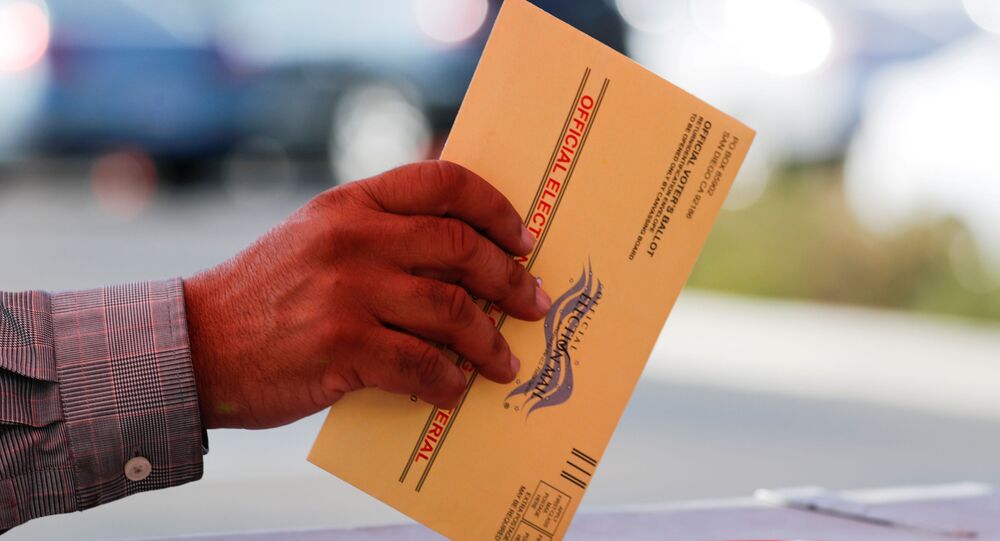 The Hidden Flaws of Voting by Mail: Why the GOP is Suing California Governor Newsom

The vote-by-mail initiative pushed ahead by Democratic-controlled California has prompted a new wave of partisan strife with the Republicans over potential voter fraud. US political scientists Ross Baker and Timothy Hagle explain what's behind the GOP's legal battle against Governor Gavin Newsom.

On Sunday, the Republican Party filed a lawsuit against California Governor Gavin Newsom and Secretary of State Alex Padilla over Executive Order N-64-20, which stipulates that the November 3 general election will be conducted in the state as an all-mail ballot vote amid the COVID-19 outbreak. The Republicans argue that by ordering vote-by-mail ballots be automatically sent to every voter, including inactive ones and those with invalid registrations, state authorities are opening the door to "fraud, coercion, theft, and otherwise illegitimate voting".

The United States cannot have all Mail In Ballots. It will be the greatest Rigged Election in history. People grab them from mailboxes, print thousands of forgeries and “force” people to sign. Also, forge names. Some absentee OK, when necessary. Trying to use Covid for this Scam!

The executive order, signed by Newsom on 8 May, requires all county election officials to provide mail-in ballots to voters; it also includes provisions for in-person voting stations for US citizens with disabilities, homeless Americans and voters who need voting materials in foreign languages.

CA is now a vote by mail state.

Every registered voter will receive a mail-in ballot for the Nov election.

The right to vote is foundational to our democracy. No one should be forced to risk their health to exercise that right.

​"There is little evidence of voter fraud with the use of the mail ballot if you choose to believe the overwhelming evidence," asserts Ross Baker, a political science professor at Rutgers University. "If sending in a mail ballot saves only one life from coronavirus in a polling place, it will be worth it."

However, according to the federal Election Assistance Commission (EAC), up to 28.3 million mail-in ballots went missing between 2012 and 2018, which equates to roughly 7 million missing votes in each of four past elections.

"Republicans frequently express concerns about voter fraud," says Timothy Hagle, a political science professor at the University of Iowa. "Democrats often respond by saying that there isn't proof of such fraud to justify Republican concerns. Nevertheless, there have been instances of problems with absentee or mail-in ballots, often referred to as 'ballot harvesting'."

According to the political scientist, mailing actual ballots to every voter, which would include many addresses that are no longer valid, "has the potential to cause problems in the election as it would all have to be sorted out after election day".

"I'll note here that although we can assume that California will vote for the Democrat in the presidential election, there are lots of down-ballot races for which the shift of a few thousand, or even a few hundred votes might make a difference," the professor highlights.

How an All-Mail Ballot Vote May Mess Things Up

The political scientist elaborates that the traditional process for absentee ballots allows for checks on the system: "The first is that the application would be checked against voter files in the state," he notes.

For instance, in Iowa, when submitting the ballot, the voter should sign the return form and attest that he or she will not vote a second time, Hagle explains, adding that other states mostly have a similar procedure. However, "simply mailing ballots to all voters may cause a lot of voters to mistakenly send back the ballot and then show up on election day". "They might not understand that what they are sending back is the actual ballot," the professor presumes.

"Another aspect of having an application first is that it helps to guarantee that the ballots are being mailed to the valid addresses of eligible voters," he says. "Lots of voters move from one location to another, or even leave the state, between elections."

The professor points out that in Iowa voters are labelled "active" and "inactive": inactive voters are those who haven't voted in about four years and who have either not updated their registration or have left the state.

"Regardless of whether California has a similar distinction, inactive voters are still eligible and according to Newsom's order would be mailed a ballot," he underscores. "That could result in thousands of ballots going to addresses that are incorrect or no longer valid. Many such ballots would likely be sent back as undeliverable, but it's very possible many would not."

There is yet another issue addressed by the Republicans in their complaint to the court, Hagle notes: according to the GOP, Newsom "does not have the power to take this particular action".

The Republican National Committee, National Republican Congressional Committee and California Republican Party argue that the governor's actions amount to "usurpation of the legislature's authority" to set the "time, place and manner" of the vote which should be authorised by state legislature in accordance with the US Constitution.

"This brazen power grab was not authorised by state law and violates both the Elections Clause and Electors Clause of the US Constitution," the plaintiffs say, insisting that the Californian governor's executive order is illegal and must be enjoined.