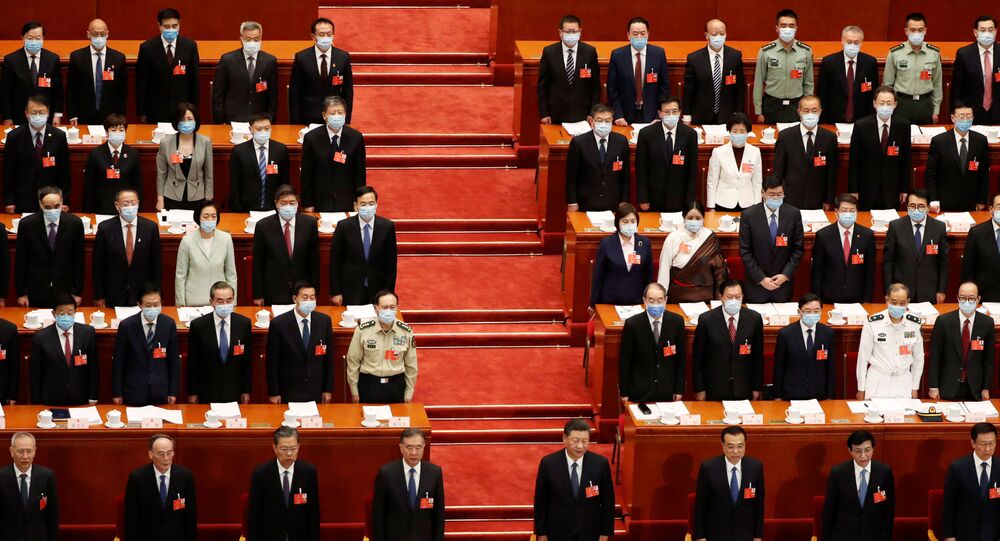 As the Chinese People's Political Consultative Conference (CPPCC) and National People’s Congress (NPC) met for their Two Sessions plenary meetings this week, it was hard to ignore US corporate media coverage of China’s proposed security laws. One expert tells Sputnik that this attention comes as a direct response to the US’ own economic turmoil.

John Ross, a senior fellow at Chongyang Institute, Renmin University of China, and an award-winning resident columnist with several Chinese media organizations, joined Radio Sputnik’s Loud and Clear on Friday to discuss the US media’s increased interest in China’s domestic security affairs and provide insight on what may be behind the shift.

While discussing the makeup of Two Sessions, Ross explained to hosts Brian Becker and John Kiriakou that while the CPPCC is held at high regard and provides advice on subjects such as the economy, business and culture, it does not have any real legislative authority like the NPC.

He went on to address the disparity between legislatures in China versus the US, noting that the majority of lawmakers in Washington are millionaires and, therefore, advocate for those of a similar socio-economic class.

In China, however, “a far wider range of people” are represented during the annual parliamentary meeting because the idea of leadership is so entrenched in the country’s culture. As a result, there are legislative members of various backgrounds, including those who simultaneously hold regular jobs.

Ross argued that Americans are not receiving a realistic view of China due to the skewed image of the socialist country presented by the US corporate media.

“The United States is trying to promote secessionist organizations within Hong Kong … and China won’t accept it,” he argued, speaking of the Chinese population’s support of the new security laws. As a result, proposed legislation “clamps down” on these secessionist movements.

Though US outlets such as The New York Times warned that the implementation of this new law “could lead to even bigger and more violent protests,” Ross contends this is a type of “wishful thinking” that arose in the US after the international financial crisis in 2007 and 2008.

After this event, “the US saw an immense shift in the economic relationship of forces in the world, in favor of China. The United States is very worried that a similar thing is now going to happen,” he stated, referring to the ongoing economic turmoil in the states amid the COVID-19 pandemic.

Citing projections from the International Monetary Fund (IMF), he noted that October 2019 forecasting suggested the US economy would “grow by 3.9%” over the next two years. However, an updated projection foresees that the US economy will “contract by 1.4%” over that period.

Ross argued that because the US is a capitalist country, it lacks the ability to do much to control its macro economy. Resultantly, Washington is now focusing on slowing China’s economy, and US corporate media is expanding its interest in Chinese affairs, though through its own lens.