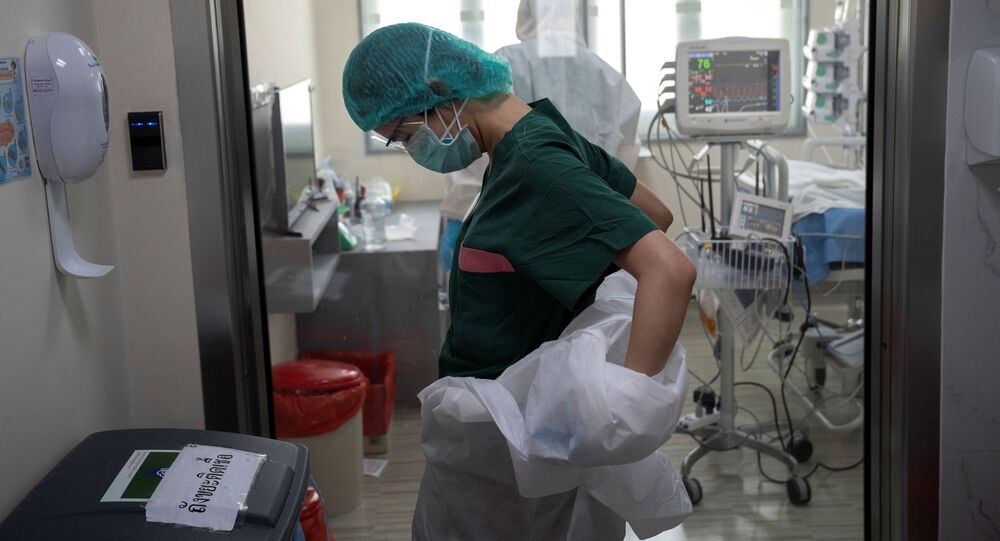 Across the world doctors and nurses have been warning that they don’t have enough Personal Protection Equipment. Bulgaria has even seen medical staff resign over the lack of PPE, while physicians in Zimbabwe have reportedly gone on strike.

Professor Udo Schuklenk is the Ontario Research Chair in Bioethics and Public Policy at Queen's University at Kingston in Ontario, Canada. He's a Joint Editor-in-Chief of Bioethics, the official publication of the International Association of Bioethics.

Professor Schuklenk penned a new article for the Journal of Medical Ethics arguing that healthcare workers are justified in refusing to treat COVID-19 patients, unless they are provided the suitable Personal Protection Equipment (PPE). He also says that voters bear responsibility for electing governments who have systematically undermined their healthcare systems.

Sputnik: Isn't it a violation of the duty of care owed by healthcare professionals to make their services conditional on receiving PPE?

Dr Udo Schuklenk: No, it isn't. There's no unconditional duty on health care workers to provide care. They can be expected to accept an average degree of daily risk. Suboptimal or no PPE increases that risk far above average.

It's also a matter of reciprocity. Professionals and society cut a deal entailing that professionals provide reliably professional services, society is obliged to provide the tools to enable them to do so.

Sputnik: Don't healthcare professionals assume a degree of risk when they sign up for the job?

Dr Udo Schuklenk: Yes, given that nobody forces anyone to become a health care worker and given that they have a societal monopoly on the provision of these services.

But it is not the case that the degree of risk has no upper ceiling.

Sputnik: Won't it just be the patients who suffer if healthcare professionals refuse to provide necessary services during this COVID-19 pandemic?

Dr Udo Schuklenk: That is the price patients will have to pay for living in a democratic society that chose not to provide the necessary means of protection to their health care workers.

Sputnik: You have written that governments have failed to prepare for a global pandemic despite being warned that something like the current outbreak was on the horizon.

Can you give examples of clear warnings, that something like the COVID-19 pandemic was coming, which were ignored by national governments?

Dr Udo Schuklenk: I did in the paper. Just look up Laurie Garrett's book [The Coming Plague: Newly Emerging Diseases in a World Out of Balance], or any number of other warnings about pandemic influenza. There were plenty of warnings, in fact, many governments had plans in place to prepare for pandemics like the one we see now, but they chose not to act on those plans.

Sputnik: Your article makes a big deal about people knowingly and 'democratically' electing governments that "starved the healthcare delivery infrastructure". But in the UK, for example, most people are not necessarily aware that the NHS is being privatised because it has been done over decades and has not been systematically covered in the mainstream press.

Dr Udo Schuklenk: That is not quite true, in the UK papers like The Guardian reported during pretty much every winter flu season that the NHS was stretched to breaking point. Even papers not suspect of leftwing leanings, like The Sun, reported about lack of beds in NHS hospitals, hallway medicine, and all that.

People knew that decades of underfunding had disastrous consequences for health care delivery. They were content with that, because it reduces their tax bill. These kinds of individual behaviours have consequences.

Sputnik: The Conservative Party, New Labour and Liberal Democrats – the three main UK parties – have all played a role in the marketisation of the health system (despite denying that they have been doing so).

Aren't you blaming everyday voters for the decisions made by the political elite, over whom, in practice, they actually have little power?

Dr Udo Schuklenk: Well, they chose to elect and re-elect governments who executed the kinds of policies that year after year crippled the performance of the NHS. I have trouble seeing that the electorate was an innocent bystander here.