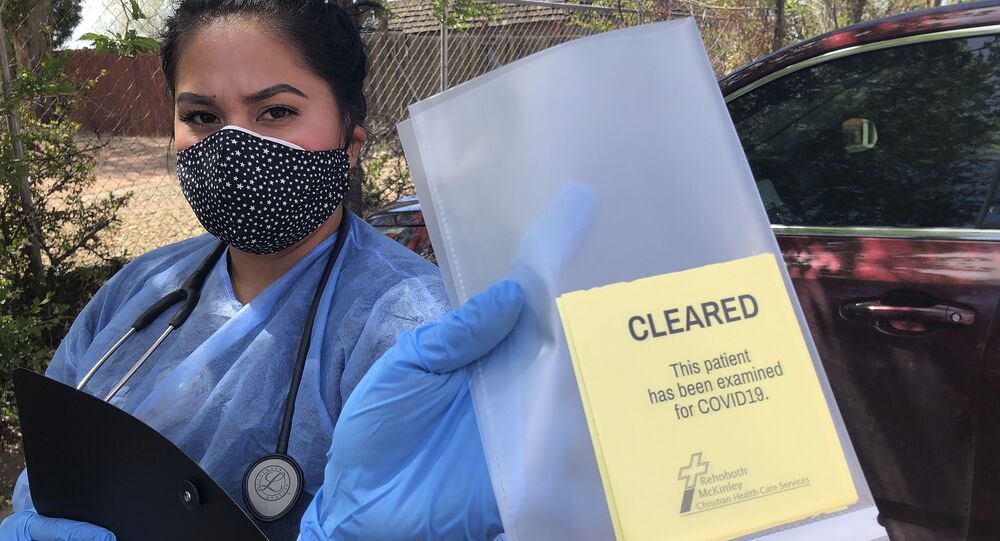 Although the US COVID-19 pandemic has mostly ravaged urban areas to date, it will soon bear down on rural areas home to more vulnerable populations, Dr. Tara Smith, an epidemiologist and professor at the Kent State University College of Public Health, told Radio Sputnik’s Loud & Clear Wednesday.

“What we’re concerned about is as this moves from urban to rural areas, there are a lot of places that are really underprepared, and we are seeing this already hit some communities, especially those that have places where this can really get into a location and amplify. So, we’ve seen this hit processing plants - there are a lot of those in rural areas that are close to animal farms … We’ve seen outbreaks in meat processing plants; we’ve seen outbreaks in prisons, which are also a common feature of rural areas,” Smith told hosts John Kirikaou and Brian Becker.

“There is some natural, built-in social distancing in rural areas, which helps to slow the spread,” Smith added, addressing the fact that populations in rural areas tend to be more dispersed than in urban areas.

“But rural areas have a lot of risk factors for more serious infections. So, they tend to be older populations, which of course we know is probably the biggest risk factor for having a serious or deadly COVID-19 infection. People in rural areas tend to lack health insurance more frequently, and even if they are insured, there still is a mentality that it is weak to go to the doctor. So, then they put off that doctor’s visit until they’re late in the infection, at which point, again, it may be very difficult to treat, or they just may not even have access to some of those hospitals. It’s not as simple as going to your local ER [emergency room] when it could be a 60 or 90-minute drive to get there, and ambulance service may be really rare,” Smith noted.

“People in rural populations have higher levels of obesity and heart disease and diabetes than people in urban areas. All of those together can make for a perfect storm once this virus potentially hits some of those rural areas,” she added.

According to the Housing Assistance Council, a national nonprofit that builds homes across rural America, there had been more than 67,000 cases of COVID-10 in rural US communities as of May 3, and more than 2,500 people had died as a result. Data compiled by the nonprofit also reveals that although around 6% of US COVID-19 cases as of May 3 had been reported in rural communities, the proportion of cases in rural areas has been increasing. Rural areas most notably affected by COVID-19 include communities that host meat packing facilities in the Midwest, African-American communities in the Southwest and Native American communities.

In fact, communities near or on the Navajo Nation, which spans portions of Arizona, New Mexico and Utah, have been hit disproportionately hard by the pandemic. The Navajo Nation on Tuesday overtook New York and Jersey for the highest per-capita COVID-19 infection rate in the US. With more than 4,000 COVID-19 cases, the nation has about 2,304 cases of the respiratory illness per 100,000 people, according to the Housing Assistance Council.

“We’re seeing some of the worst outbreaks per capita in some of those areas [Native American communities], again, that are less populated, more spread out. But we have a high number of cases in those areas relative to the population that makes for a really broad outbreak. And we’re seeing that in some of those locations, and some of those, again, have those same risk factors. They tend to have high levels of obesity and diabetes, they lack health care and facilities in many locations, and of course, they’re subject to the things you see in typical rural areas which tend to be, at least in the Midwest, more white,” Smith noted.

“In the South, we also have a larger black population, but especially in the South and in those reservation facilities, you also have the additional impact of racism. So all of those are acting together to really impact people like that who are already suffering from a number of different things,” Smith added.

Although there are excellent physicians in rural areas, many of them are generalists and don’t have access to specialized equipment, she said.

“What is lacking in rural areas - there are great doctors, great physicians, great health care providers, but they are lacking a lot of specialists. Those people that are doing medicine in rural areas tend to be generalists … So, when you have something like COVID-19, that may involve a lot of different specializations - we’ve seen this virus cause heart problems, kidney problems, neurological problems, in addition to the regular respiratory issues - you might not have access” to the specialized equipment needed to treat such conditions, Smith explained.

An article published Tuesday in the Wenatchee World, titled “COVID-19 puts rural hospitals on brink of financial collapse,” suggests that the financial impact of COVID-19 could be ruinous for rural hospitals, especially those that have not yet received state support or federal aid.

“We just don’t know,” Smith said about whether COVID-19 will cause rural hospitals to collapse.

“Some of these were already listed as basically on the brink in 2019, before the pandemic … So, we’ve seen them collapse over the last 15 years,” she added.

“We’re definitely concerned that this [pandemic] is going to exacerbate that.”