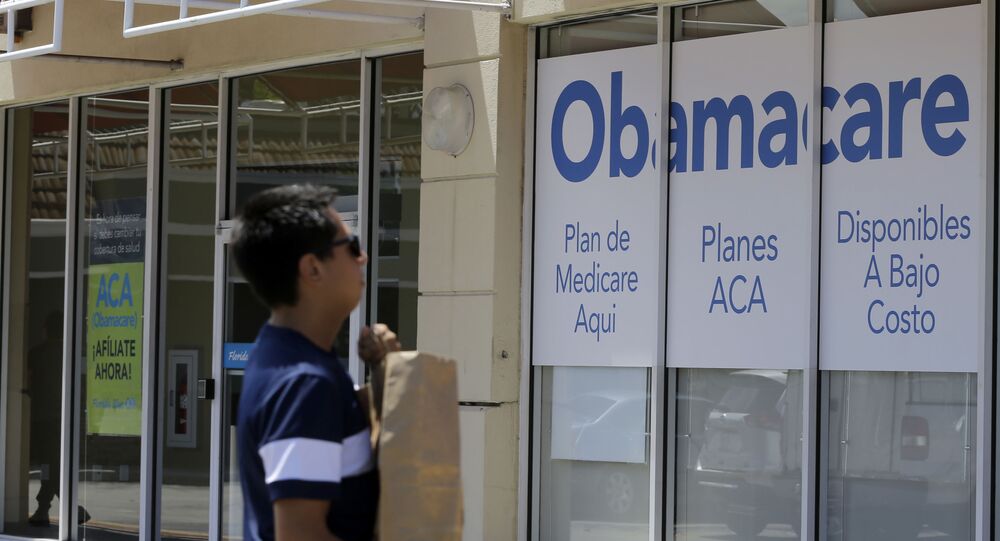 The COVID-19-driven economic recession may add up to 12 million uninsured under any health insurance programme to the existing 27 million uncovered in the US. American academics and health experts have explained how the US found itself in the midst of the coronavirus crisis and whether Obama-era programmes may save the day.

An estimated 25-43 million people may lose their employer-sponsored health insurance (ESI) coverage amid the COVID-19 pandemic in the US, warns the Urban Institute and Robert Wood Johnson Foundation think tank, stressing that though many of the newly jobless will be able to opt for Medicaid, roughly 7-12 million people will be left out in the cold.

Before the coronavirus outbreak dealt a heavy blow to the US economy, about 160 million people nationwide under the age of 65 had ESI coverage. However, more than 31 million workers filed for unemployment between 15 March and 25 April being struck by the COVID-related recession, according to federal statistics. The prospects look pretty grim as the unemployment rate will likely reach 20% by June 2020, the researchers say.

Can Obama-Era Programmes Fix the Problem?

The study specifies that over half of the newly jobless will be able to switch to Medicaid coverage in states that expanded Medicaid under the Obama-era Affordable Care Act (ACA), with only about one-third obtaining Medicaid in the 15 states that have not expanded the programme. One might ask whether the ACA is a panacea for those seeking to survive the coronavirus-driven recession.

The ACA, commonly known as Obamacare, slashed the number of uninsured by roughly 20 million people but nevertheless left about 27 million uncovered by any health insurance plan whatsoever. According to the Kaiser Family Foundation's study, about a half of uninsured say that they still could not afford to buy coverage.

While saying that "The ACA is playing a critical role in preserving Americans’ access to health insurance and health care during the COVID-19 pandemic," Coleman Drake, assistant professor of the Department of Health Policy and Management at the University of Pittsburgh, admits that the complexity of the US healthcare system is likely to add to the confusion.

"Determining whether you are eligible for Medicaid or Marketplace insurance can be confusing, and those who have recently lost their jobs have plenty of other constraints on their time besides figuring out how to become insured," he says, suggesting that the automatic enrolment into Medicaid or Marketplace plans of those uninsured and a reduction of the Medicare eligibility age could have helped, as the pandemic-related economic downturn bites.

Obamacare: Yet Another Failure to Fix the US Health Insurance System

The Obama-era law is unlikely to solve the unfolding crisis as it was flawed from the outset, opines Dr. Jack Rasmus, a professor of economics at Saint Mary's College of California and author of "Obama's Economy", who highlights that the Obamacare repeated the failure of all prior health care solutions by predecessor US administrations. According to Rasmus, Barack Obama by no means sought to dramatically extend healthcare coverage in the country.

"Obama offered what was called the ‘public option’ in lieu of Medicare for All," he elaborates. "The public option was simply to have the federal government offer its own competing health insurance to the private insurance companies. But the private insurance industry demanded Obama pull it from proposed legislation as a condition for their support for the legislation. Obama quickly then pulled the public option. There would be no government competitive offering—even if in the form of an insurance solution and not a Medicare for All solution."

Without this "public option", private insurers jumped at the opportunity to "game the system": health care coverage was reduced while the costs of monthly premia, co-pays, and deductibles were allowed to rise significantly, he highlights.

To complicate matters further, the ACA funding envisaged "a tax on medical devices, a tax on private high cost and often union-negotiated health insurance plans with their employers, a 3.8% surtax on investors income, a mandate that non-insurance companies had to buy into the programme if they didn’t have equivalent coverage already, a mandate that individuals had to buy into the government managed plans if they didn’t have employer coverage, and dozens of other money raising measures," Rasmus explains. Predictably, business interests opposed the taxation and mandates and "by the time Trump entered office, Obamacare was a shell of its even limited intent", he stresses.

"The big failure of the ACA, as this writer forewarned back in 2010-11, was it would fail to control health care rising costs and declining coverage," Rasmus summarises. "What exists today is high unaffordable private industry offerings, with extremely high deductibles… There therefore remain at least 30 million still uninsured in the US, while the health insurance companies continue to reap at least a half trillion dollars in new revenues a year from the programme."

Ensuring That All Individuals Have Access to Healthcare is Critical

The main reason why Obamacare failed to cope with multiple healthcare issues was because of the way it was designed, agrees Dr. Elaina George, a board certified otolaryngologist and author. She echoes Rasmus by saying that Obama's initiative has in fact empowered insurance companies instead of patients.

"It doubled down on the most expensive part of the healthcare system", she says. The costs of prescription drugs, hospital costs and insurance premiums went unchecked". The doctor elaborates that what actually happened was the shifting of healthcare costs to patients in the form of high deductibles which "had a chilling effect on patient access to healthcare despite the government subsidies which were designed to help pay for insurance premiums".

To fix the problem the government should empower the patient to become healthcare consumers, she proposes:

•             First, price transparency would allow patients to find affordable care. It would exert a downward pressure on healthcare costs due to competition.

•             Second, getting rid of the pharmacy benefit management companies which encourage drug prices to remain high.

•             Third, allowing patients to use their health savings accounts to pay for direct primary care, and health sharing strategies.

The coronavirus outbreak has indicated that "competitive and business driven model of healthcare in the United States is not aligned with the cooperation and coordination needed in a pandemic", presumes Patricia Davidson, dean of the Johns Hopkins University School of Nursing.

"Moreover we have lost our agility for working with infectious diseases and for a certain part of the population this lack of perception of risk and fear of rare adverse events has led to scepticism in the role and value of vaccines," she says. "The images of fragile health systems are generally reserved for low and middle income countries (LIMC). But front and centre we have some of the richest countries in the world reeling from the ravages of the pandemic and in contrast some LIMC have been able to rapidly flex to engage in screening and contact tracing".