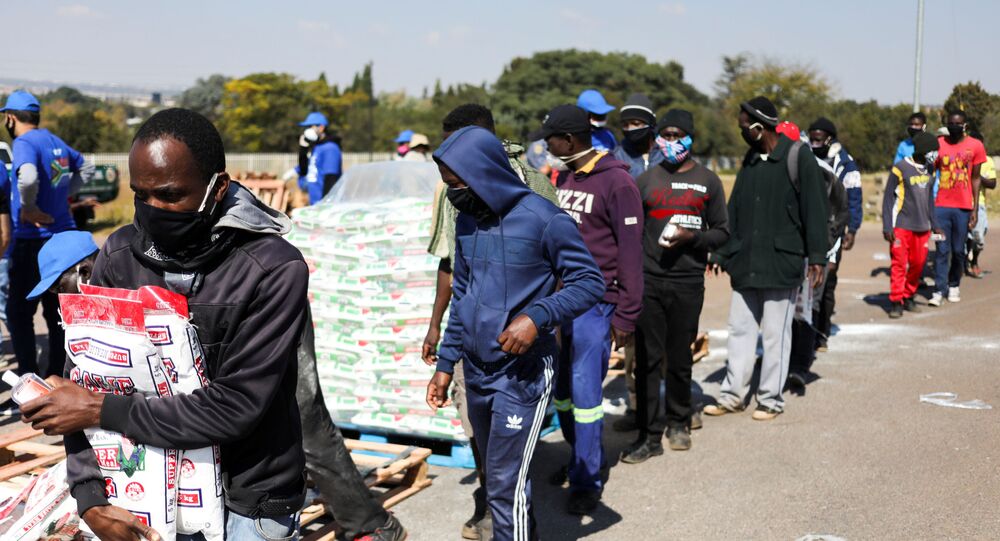 The country’s right-wing Freedom Front Plus party has warned that the implications of the ongoing COVID-19 lockdown may become worse than the virus itself, and is preparing to challenge government rulings in court.

According to the party leader Pieter Groenewald, tough restrictive measures have already served their purpose.

Sputnik: South Africa has been on lockdown since 27 March. All citizens except for emergency workers were ordered to stay indoors, the streets were patrolled by armed soldiers and sales of tobacco and alcohol were banned. Has the government’s response to the pandemic been adequate and sufficient?

Pieter Groenewald: As far as the Freedom Front Plus is concerned – we say yes. It started quite efficiently, we started with 21 days of total lockdown in South Africa, and it was said that the reason for that was to flatten the curve of infections, so that health services in South Africa could prepare themselves for the peak that is still coming, because our winter season is lying ahead. The minister of health, the medical advisor of the President and the President himself said on television that the lockdown has served its purpose. Freedom Front Plus agreed that it served its purpose, but we have a problem with the government because it’s not unlocking the economy that’s going to have severe consequences for South Africa.

According to South Africa’s Department of Health by 18 May there have been 15515 COVID-19 cases and 264 coronavirus-related deaths nationwide.

Sputnik: Your party - Freedom Front Plus - announced that it will fight government lockdown regulations in court "on an urgent basis", saying that all businesses must be allowed to operate again with strict sanitary regulations in place. Meanwhile, media reports show that South Africa has the highest numbers of infections on the continent, with more than 1100 cases registered within the past 24 hours alone. Don’t you think it’s too early to lift the restrictions?

Pieter Groenewald: No, we don’t think so. Because we must remember one thing: the lockdown will not stop the virus. The virus will be there and we say what should happen: as I said, the initial lockdown served its purpose, everybody agreed with that, but our view is that the government at this stage is taking arbitrary decisions and decides to let this sector of the economy open, or that sector of the economy – for instance the mining sector, but then only 40%, then 50%, then 60%. They have no scientific figures or data on which they base their decisions.

And there are many scientists and even scientists and medical people on the advisory board of the government who say that we can unlock the economy completely now. If I say “completely”- the Freedom Front Plus agree that we have to ensure that the spreading of the virus should be minimized, and our approach is to say that the government must put certain health measures and regulations in place and all businesses must comply, preventing the spread of the virus. And if a business can comply with those measures – then the Freedom Front Plus says that they should be allowed to do business.

We are very vulnerable in South Africa when it comes to very small or microbusinesses, sole proprietor’s businesses. For instance, hairdressers, barber shops, garden services – all those people, they can comply with all health regulations, but they are at the moment only permitted to open on Level One. Now, when is that going to be? But they cannot survive economically. And we are losing millions of jobs in South Africa because of that.

South Africa has 5 COVID-19 lockdown alert levels, with Level 5 being the strictest and Level 1 - the softest. Currently the country is at Level 4, with the government considering easing the restrictions further by the end of May. Up until last week all sales of non-essential goods over the internet were prohibited. Alcohol and tobacco sales are still banned nationwide.

Sputnik: We’ve seen images of riots and reports of food shortages in Cape Town in April. Community activists in poor neighbourhoods of Cape Town appealed to President Ramaphosa for help, and he promised to assist them. Your party represents the country’s Afrikaner minority, with many of its members being farmers. Did they receive as much support from the government?

Media reports suggest that South Africa’s GDP may shrink by 10-17% this year, adding up to the negative effects of a recession, which the nation had entered before the pandemic - in the last quarter of 2019. Financial analysts also warn that COVID-19 relief programs will increase government debt by R500 billion ($27 billion).