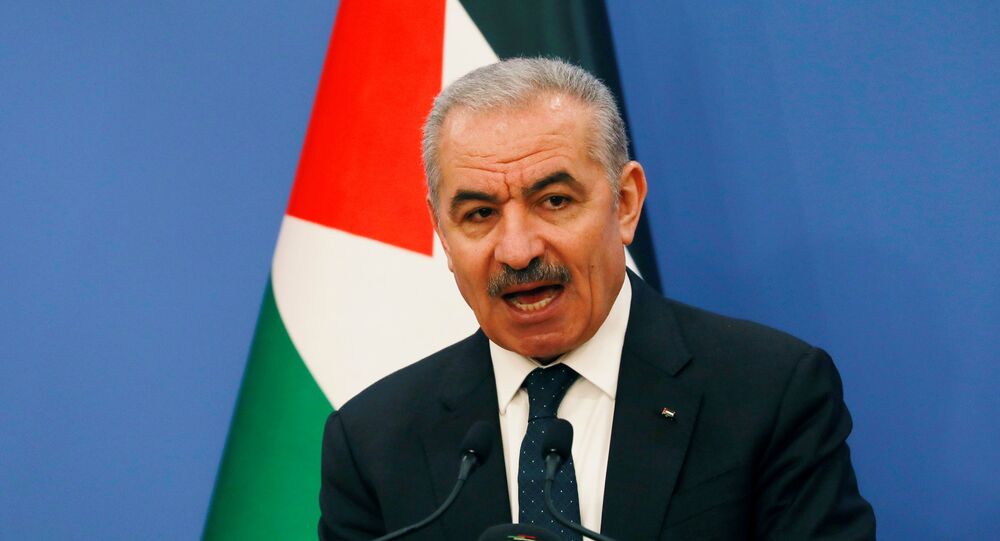 Mohammad Shtayyeh might be considered a "good and hard working politician", but that's not enough to succeed Palestinian Authority President Mahmoud Abbas, believes a member of the Fatah Revolutionary Guard, especially given the fact that the autonomy's PM has a number of heavyweights to contend with.

Palestinian Prime Minister Mohammad Shtayyeh might only be one year into his tenure in office but he enjoys high approval ratings over the way he has been handling COVID-19 which has infected more than 370 people in the autonomous region.

According to the Ramallah-based Arab World for Research and Development Centre which surveyed more than 800 Palestinians in the West Bank and Gaza, over 80 percent of respondents said they trusted the government led by Shtayyeh, a stark increase from a previous poll conducted at the beginning of the year before the outbreak of the pandemic - when the PM's approval ratings stood at only 27 percent.

The reason behind Shtayyeh's success appears to be obvious. While 84-year-old President Mahmoud Abbas has been in and out of hospitals, with his health preventing him from maintaining direct contact with people, his PM, who was quick to implement strict measures to contain the spread of the virus, has been holding weekly press conferences and daily meetings, keeping his people up-to-date and steering the Palestinian economy through difficult times.

As his popularity started mounting, some media outlets began to speculate that Shtayyeh has every chance of succeeding Abbas as the president of the Palestinian Authority but Dimitri Diliani, a member of the Fatah Revolutionary Guard, says the PM's chances are not that high.

"While he is a professional and an academic, he is no match for the heavyweights of Palestinian politics and that means that his chances to succeed Abbas are slim".

Indeed, the Palestinian political landscape has other prominent indiciduals that would put forward their candidacy if Abbas steps down. One such personage is Marwan Barghouti. While for Tel Aviv, he's a man who has been sentenced to life imprisonment for murdering Israelis, for Palestinians he is considered a hero of the first and second popular uprisings and a man who can govern the PA even if that means "running everything" from a prison cell.

According to the Palestinian Centre for Policy and Survey Research, Barghouti would received the support of 59 percent of Palestinians if Abbas were to leave his post, whereas Ismail Haniyeh, the chief of Hamas' political bureau, is projected to get 34 percent in the event of elections.

But the existence of political rivals is not the only factor that stands in Shtayyeh's way, believes Diliani. In contrast to his successful handling of the COVID-19 crisis, the premier has often been criticised for the way he coped with the PA's economic crisis, and the high unemployment and poverty rates.

In December 2019, a survey found that a majority of Palestinians (49 percent), in the West Bank and Gaza, thought that Shtayyeh's government brought no change when compared to the previous administration led by Rami Hamdallah, whereas 31 percent of those asked said the current PM had only made matters worse.

"The way he handled the frozen accounts of Palestinian prisoners hasn't helped him to boost his popularity either", said Diliani referring to the warning issued by an Israeli research institute Palestinian Media Watch that called on banks operating in the West Bank to freeze all assets of Palestinian inmates and their families as failing to do so would mean violating Israeli law, something that could potentially lead to heavy penalties.

It took Shtayyeh two days to issue a statement condemning Israel's actions and reach an agreement with the banks after tensions in the West Bank started escalating and resulted in riots during which several banks were set ablaze.

"The fact that he scolded his spokesman in front of the camera because he kept a hand in his pocket while standing in front of the PM didn't score him more points either. The general public didn't appreciate the move. Shtayyeh is considered to be a good and a hard working politician but no more than that. To assume the post of the president, he needs to be a leader of a different calibre but he is simply not there yet", Diliani summed up.